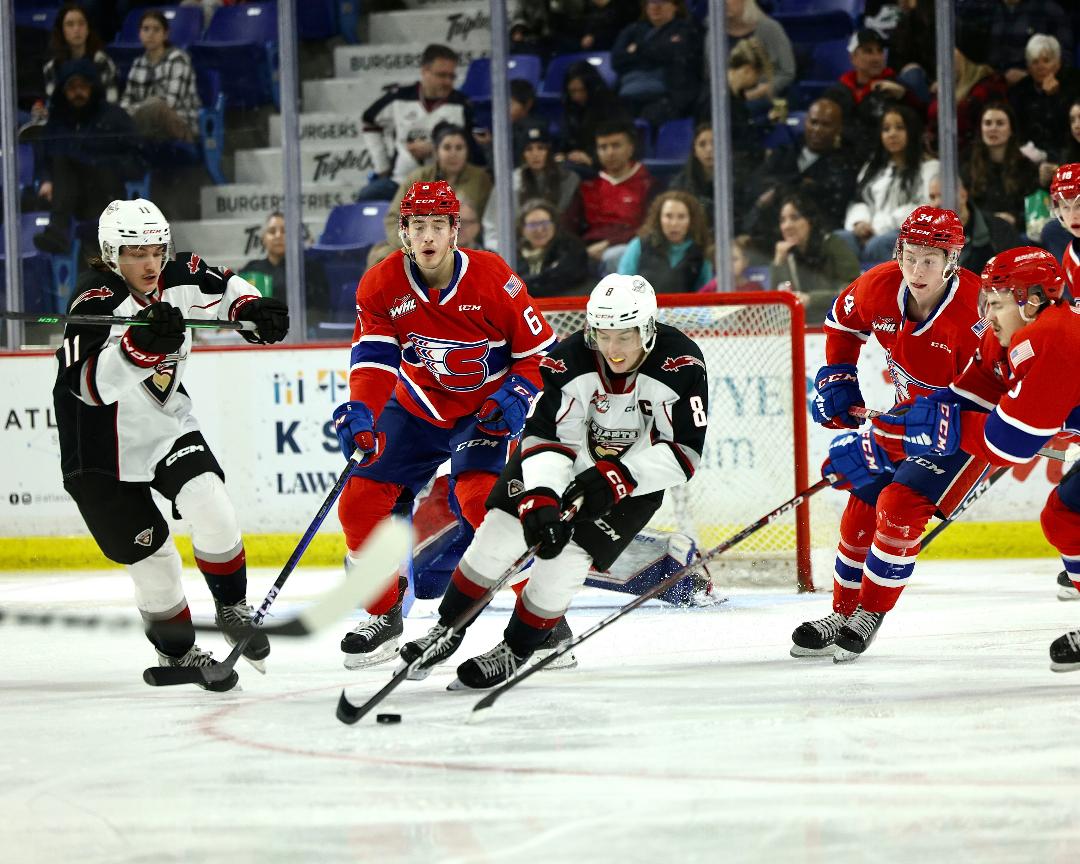 Plenty has happened between the 30 and 40-game mark. The Vancouver Giants made a massive trade sending Zack Ostapchuk to Winnipeg, Ty Thorpe was named captain, and Cameron Schmidt made his WHL debut. Vancouver also finished their last ten-game stretch above .500 with a 5-4-1 record to push their overall record to 16-18-4. Here are some players that have stepped up over the first 40 games.

Thorpe has always been a leader on this team but has taken his game to another level ever since the “C” was sewn onto his jersey. In his two games since being named captain, he has four goals, six shots and has gone 31 for 57 in the faceoff dot. He also has 13 points in his last ten games overall and leads the way for the Giants with 46 points.

An undrafted overager, his performance this season should draw the eyes of pro scouts as he continues to fight for a contract he very much deserves.

Since signing with the Giants, Dylan Anderson has stabilized the blueline and become one of the Giants’ most important players. Whether it is on the first unit power play or the penalty kill, he is able to make smart plays that help rather Vancouver either create offence or get the puck out of their zone. He has become one of the leaders on this team and is a player the team can count on late in games.

Over the past ten games, Anderson has been able to show off his offensive skill set, recording five assists and six points over the stretch. He has also been credited with 25 shots on goal and has demonstrated a strong ability to read the play in the offensive zone. With the playoffs on the horizon, watch for the Langley native to get plenty of ice time and continue his strong play into the postseason.

The 2023 NHL Draft prospect continues to see his stock rise thanks to his strong play and willingness to do whatever it takes to win. Jaden Lipinski now has 33 points on the season, with nine of those coming over the past ten games. To go along with his strong play, it was also revealed that he has been ranked 38th by NHL Central Scouting among North American Skaters on their midseason list. The next ten games will be massive for him as he gets set to participate in the Top Prospects Game at the end of January and show the scouts exactly what he brings to the table.

Brenden Pentecost had a night to remember on January sixth when he not only recorded two assists but scored the overtime winner in a 3-2 overtime victory over the Tri-City Americans. He helped the Giants erase a two-goal lead and showed the importance of just getting the puck on goal with his overtime winner. While the Surrey, BC native isn’t known as an offensive play driver, he has been improving all season to the point where he is being used in overtime and on the power play. It is clear that all the hard work he put in during the offseason is paying off, as he has finally established himself as an everyday WHL defender.

Playing in his first full season with the Giants, Colton Roberts is becoming the defenceman Vancouver hoped for when he was drafted 11th overall in 2021. His defensive game is getting better as the season progresses, and he has nights like at home against Spokane, where he is able to demonstrate the ability to generate shots on goal. Watch for him to continue to develop and play a key role for this team down the stretch and into the playoffs.

That will do it for the Giants’ 40-game update here on the Area 51 Sports Networks. Make sure to keep your eyes peeled right here as we bring you the best WHL coverage all throughout the season.