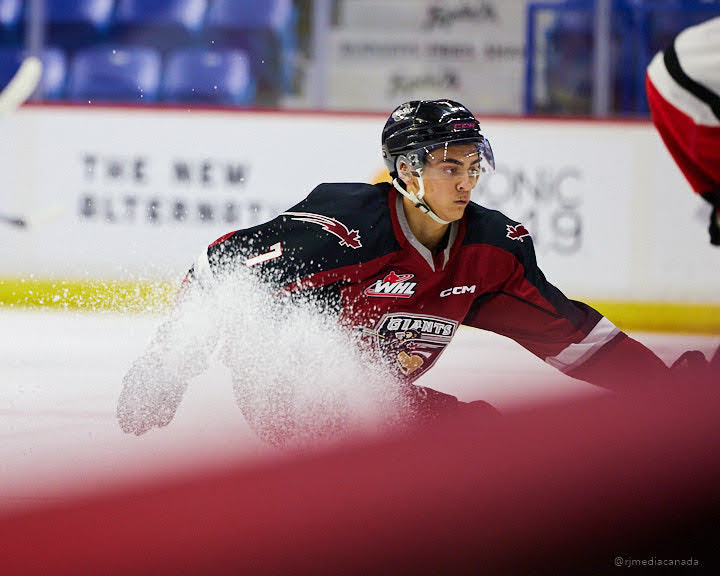 The 2023 NHL Central Scouting rankings are out, and five Vancouver Giants have made the list. Samuel Honzek, Jaden Lipinski, Ty Halaburda, Mazden Leslie and Ethan Semeniuk were all ranked in the top 175 among North American skaters and are projected to be drafted in late June. All five were also included in the preseason rankings.

Despite a severe injury that will keep him out for a few weeks, Honzek was ranked ninth among North American skaters. The Slovakian forward has excelled in his first year at the WHL level with 43 points in 17 games. He was also named to Slovakia’s World Junior team for the second straight tournament in December.

Lipinski’s stock continues to rise as he was ranked 38th among North American skaters. The Arizona-born center has 33 points in 39 games and has taken up a leadership role with the team. He will be the Giants’ only participant at this year’s Top Prospects Game, as Honzek will be unable to attend.

Halaburda is a speedy, versatile forward who is one of the hardest-working players on the ice. He comes in ranked at 61st among North American skaters but could see a rise in the rankings with a big second half of the season. He has 21 points in 38 games and has recorded a shot on goal in every game he has played in this year.

Leslie is the only Giants defender ranked and comes in at 80th among North American skaters. He has 30 points in 39 games and ranks 13th in the league for defensive scoring. A defender who is never afraid to activate in the offensive zone, he has a ton of potential which should garner interest at the draft.

Semenuik is ranked 173rd among North American skaters after missing over a month with an injury. In 26 games, he has 15 points but is currently riding a three-game point streak. He is a very talented forward whose ranking could see a jump if he continues his recent strong play.

You can find the entire list of all rankings here.