The good, the bad, and the ugly of the Canucks season so far 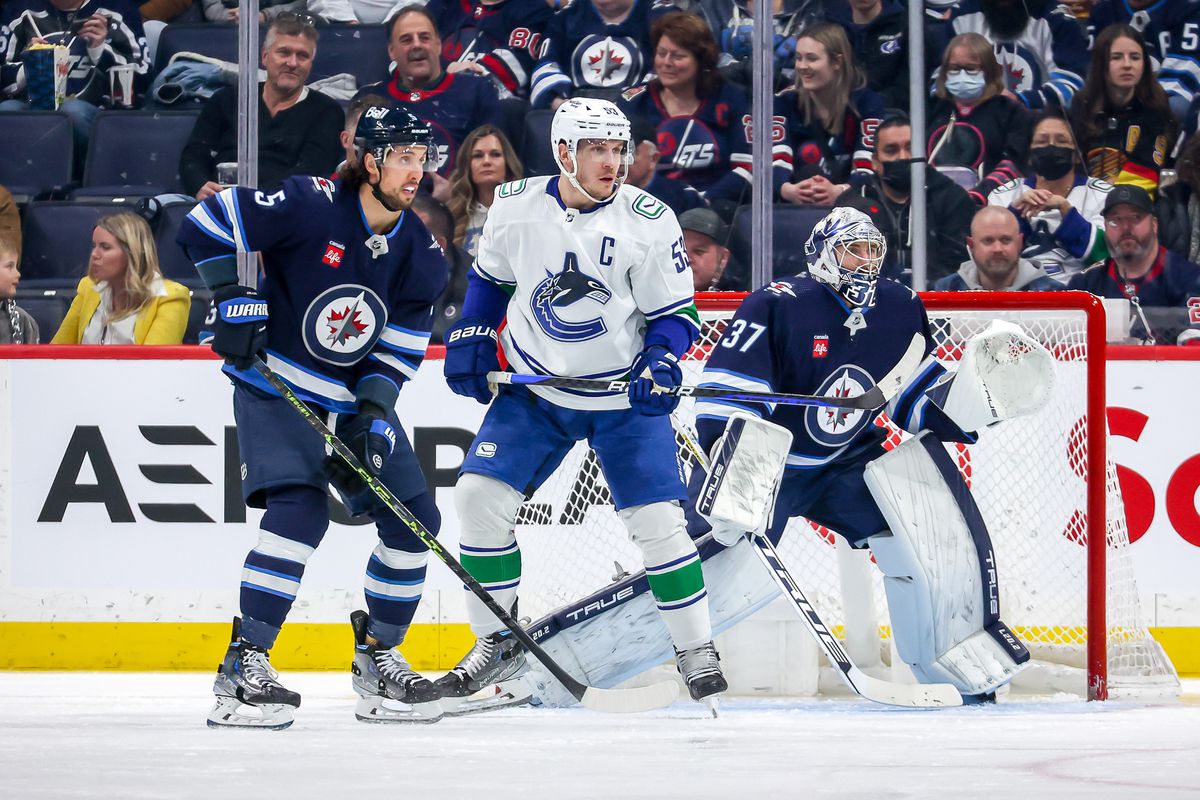 A smile may be good, but if you’re a Vancouver Canucks fan, there is nothing to smile about in your life. (Hope you get the reference, if not it’s linked for a reason.)

The Canucks started their five-game road trip with a 7-4 loss to the Winnipeg Jets on Sunday. The Winnipeg Jets scored more touchdowns than the New York Jets. That’s funny. The football Jets lost 6-11 to the Miami Dolphins as only scored two field goals. As a result, the Jets completed the series sweep against the Canucks.

It doesn’t get easier for Vancouver, up next is the Pittsburgh Penguins. Then it is off the to Sunshine State to play the Tampa Bay Lightning and Florida Panthers. The road trip concludes in Raleigh against the Carolina Hurricanes. The Canucks then fly home to play the Lightning, Colorado Avalanche, and Edmonton Oilers and then the homestand ends when the lowly Chicago Blackhawks come to town.

So I’m saying there’s a chance for Connor Bedard. Once again, he won’t magically make the Canucks a cup contender but that would give something the fans to smile about.

But right now, apathy has set in for Canucks fans. Some have been apathetic for years while some long-time fans are starting to lose interest. It’s hard to blame them, it’s been almost a decade of mediocrity.

While this season has been bad and ugly, there has been some good. Let’s go over those as the Canucks reach the halfway point.

The best part of the Canucks season, Elias Pettersson is easily their best player and has rightfully been named an All-Star for the third time in his career.

Pettersson is also in a three-way tie for fourth in even strength points (28) with Matthew Tkachuk of the Panthers and David Pastrnak of the Boston Bruins according to NaturalStatTrick. The only players with more even strength points in the NHL this season than them are Penguins captain Sidney Crosby, (30) Jack Hughes of the New Jersey Devils, (Also 30) and Tage Thompson of the Buffalo Sabres. (29) Pettersson is in an elite company.

The 24-year-old has been doing it all: Scoring, playmaking, checking, you name it. On the ice, it feels like Pettersson has been everywhere, man.

The captain of the Canucks is having a great season. It seems like he can’t stop scoring. Maybe being in that commercial with Oilers superstar Connor McDavid gave him magic scoring powers.

Horvat scores plenty of goals in the slot, which has become his office. As a result of his scoring, Horvat has entered the top ten list in Canucks scoring, which is wild.

It’s a shame that Horvat is scoring at this rate and the Canucks are still in the bottom ten of the NHL. It’s even more of a shame that he is likely to be traded or walk for nothing. As I’ve said before, trading Horvat would suck, but if the Canucks want to get into Stanley Cup contention it must be done.

It also kind of hurts that JT Miller was signed before Horvat.

New acquisitions have been decent for the most part

Canucks management did not fix the defence last offseason and right away that backfired. (More on that later.) However, they did add a lot of forwards in the offseason and during the season.

Andrei Kuzmenko has settled in a lot quicker than many expected. Playing with Pettersson has helped as he has put up 35 points in 38 games. He’s also bringing good vibes to the team.

Kuzmenko’s fellow Russian Ilya Mikheyev has brought speed, good defensive play and offence with 12 goals and 24 assists. He might be a tad overpaid but he seems like a decent middle-six winger.

The Canucks did boost their bottom six in the offseason by bringing in Curtis Lazar, Dakota Joshua, and Nils Åman and trading for Jack Studnicka early in the season. Ethan Bear was also brought in to help the defence in an early season trade.

Lazar is second on the Canucks in hits behind Luke Schenn with 85. He only has two points but he wasn’t brought in for offence anyway. I think he’s been alright defensively and has shown some good forechecking but I would like to see more physicality from him though.

Lazar’s best hit of the season is when he steamrolled Deven Toews into the Canucks bench last Thursday.

Dakota Joshua was signed to bring some flair into the Canucks lineup. He’s done that but has also provided a bit of offence with six goals and three assists so far this season. Joshua has also been a decent forechecker and has shown a lot of hustle this season.

Before he got sent down to Abbotsford, Åman was quietly doing well. He was making some smart plays and keeping things simple. As for Studnicka, he has shown some good hustle and was solid in the puck battles.

Bear has made some poor mistakes but he is good a breaking the puck out and has often made smart decisions with and without the puck.

Goaltending not up to par

Goaltending saved the Canucks on many occasions last season. This season, goaltending has not been good at all. You could even put it in the ugly tier if you want.

Thatcher Demko played lights out nearly every night last season but this season he looked like a completely different goaltender. His movement looked off and he was giving up goals, he normally would save. Demko is on the road trip but his return from his lower body injury is still unclear. Once he returns, he is going to obviously want to improve his 3.93 goals against average (seventh worst in the NHL) and 8.83 save percentage (ninth worst in the NHL)

Spencer Martin was good last season and did not lose a game in regulation. This season, he hasn’t been getting the job done. His .881 save percentage is eighth worst in the NHL and there have been times when he lets in goals he should have, especially on the glove side.

Collin Delia has only played five games and looked solid until the last game in Winnipeg where he was pulled for Martin after giving up four goals on 13 shots.

Goaltending masked a lot of the Canucks problems last year and this year, the mask has been removed.

Conor Garland and Brock Boeser have been offensive black holes

Conor Garland was one of the hardest-working Canucks last season. He was battling hard on the forecheck and creating plenty of scoring chances.

This season, it looks like he decided to wear the cloak of invisibility. He has six goals and 13 assists this season for 19 points in 38 games. That is on pace for 13 goals and 27 assists for 40 points. At a 4.9 million dollar cap hit, you have to expect more than that.

Garland’s effort seems to be missing too. You barely notice him on the ice. You do notice him spinning and turning the puck over in the offensive zone and that’s about it.

No disrespect to Luke Schenn, he has been a great story. But Schenn is known for being the one-man wrecking crew, not providing offence. If Schenn is creating more goals at 5 on 5 then you know something is wrong with your play.

As for Boeser, it looked like he was determined to have a big year. He got injured in the preseason but hasn’t made a big impact. The shot looks very off, Boeser has been poor defensively (He has been on the ice for 34 5 on 5 goals against, most out of any Canucks forward by the way) and loses the puck a lot.

It’s sad to see what Boeser has become. He has been a far cry from his rookie year where he finished second in the Calder Trophy voting to Mat Barzal of the New York Islanders. Barzal and Boeser aren’t even in the same universe anymore.

Perhaps a change of scenery is best for both Boeser and Garland.

Not going to spend too much time on Miller since I have already covered him here.

Miller did get three points including two at even strength in Winnipeg and that might be his last game of the season. Again, the Pettersson effect is in play here. But he still has a long way to go prove he is still one of the Canucks’ top players.

Once again, Miller needs to show better effort defensively, cut down turnovers and calm down a little. Nothing against passion but taking it out on your teammates isn’t acceptable. Miller needs to also prove he is a good leader for this team and that starts with taking accountability and putting up the points.

You knew this was coming.

There are so many things wrong with the Canucks defence and I don’t know where to begin. First of all, they are terrible at clearing the puck out and keep getting trapped in their own zone and can’t win the battles. Breaking the puck out? Forget it. Anyone not named Bear or Quinn Hughes is bad at it. They also make a lot of bad pinches and have to chase the other team down the ice.

The thing I noticed from the Canucks defence is that they often fail at doing the simple things and try to complicate things when they try to do the simple thing. An example of the latter is that there are times when they just throw the puck up the middle trying to clear instead of using the boards. When they do use the boards, the clearing attempt looks feeble. As a result, they have given up 152 goals this season which is the third worst in the NHL behind the Anaheim Ducks and Montreal Canadiens.

Watching the Canucks play defence is like watching the rebels trying to escape Darth Vader at the end of Rogue One. They try but their efforts are worthless. At least those rebels weren’t getting paid as much as Oliver Ekman-Larsson and Tyler Myers are.

The penalty kill is still bad, if not worse

So the penalty kill is still historically bad and it is arguably worse. The Canucks watch the puck too much, aren’t aggressive enough and are once again bad at clearing the puck. Instead of killing penalties, penalties end up killing them.

Well, it has been a tough season and there are 43 games left. Time to load up the draft lottery simulator.

Bruce Boudreau deserved better and the Canucks should be ashamed