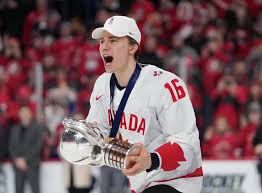 Time for another edition of Avid Thoughts where I write a weekly (not really) column on the Vancouver Canucks, the NHL, the Vancouver Whitecaps, soccer and whatever else is happening in the world of sports.

If you are new here, welcome. In addition to my strong opinions on sports, you’ll get a little bit of pop culture references here and there.

Can the Canucks tank for Connor Bedard?

Connor Bedard won gold for Canada at the World Juniors on Thursday. Dylan Guenther, the Arizona Coyotes first-round pick in 2021 scored the winning goal in overtime. That hurts Canucks fans for reasons that you already know. (At least Connor Garland and Oliver Ekman-Larsson are doing well in Vancouver…Wait.)

The North Vancouver native had an amazing tournament, plain and simple. Bedard had 23 points in seven games at the World Juniors which is a record. Now we can’t judge prospects based on the World Juniors but Bedard is special, there is no doubt about that.

Canucks fans were looking at Bedard’s performances with their eyes lighting up like Garfield the cat when his owner Jon makes lasagna or something like that. Imagine him on the Canucks. A local kid who is a generational talent playing for the team he grew up cheering for in front of thousands of fans at Rogers Arena.

Is it possible for the Canucks to tank for Bedard? Let’s see.

At the time of this writing, the Canucks have the eighth-worst record in the NHL. Due to their win over the Colorado Avalanche, (which was one of the best efforts of the season) they have the eighth-worst record in the NHL. With 37 points, Vancouver is seven points behind the Edmonton Oilers for the final wild-card spot but is 15 points ahead of the Chicago Blackhawks.

The Canucks are tied on points with the Philadelphia Flyers who have won four straight. Like the Canucks, the Flyers are a team that needs to rebuild but refuses to. I don’t think the Canucks can really tank for Bedard unless they really blow the roster up.

The most frustrating thing about the Canucks is that they are not good enough to compete for the Stanley Cup and not bad enough to tank for the first overall pick. They are stuck in no man’s land. Unlike the Jimmy Eat World song called “The Middle“, everything isn’t alright.

Like the Blackhawks, the Blue Jackets have been 2-8-0 in their last 10 games but thanks to Kirill Marchenko’s hat trick they beat the Carolina Hurricanes on Saturday. Then you got the San Jose Sharks, Anaheim Ducks and Arizona Coyotes. They are bad hockey teams too. The Sharks despite Erik Karlsson’s renaissance season are a bad team with not a lot of intriguing prospects in their system. Trevor Zegras is the NHL’s human highlight reel and Mason McTavish looks like a gem. They do have decent prospects but they are still in rebuild mode. As for the Coyotes, it is also full tank ahead for them.

Oh yeah, there’s the Montreal Canadiens. They have lost seven straight and are tied with the St. Louis Blues 2-2 in the second period as I type this.

I don’t know if the Canucks can out-tank the Blackhawks, Blue Jackets, Ducks, Sharks, Coyotes and Canadiens. Maybe if they go on a seven-game winning streak they could but I’m not sure if that will be enough.

Soccer leagues have the shortest offseasons. In MLS, that is no different.

It feels like the last Whitecaps game of 2022 happened last week. Time is as fast as The Flash nowadays, I swear it was 2016 yesterday.

The players have returned to Vancouver and are going through medicals and testing and will train on January 9. The team will head to Marabella, Spain on January 10 and they will be there for 12 days which will include a friendly match against HSV Hamburg of Bundesliga 2 on January 18. I assume there will be at least one more preseason game for them while they are in Spain.

On January 30, the Whitecaps will head to Palm Springs, California for 18 days where they will face other MLS teams such as Toronto FC and expansion side St. Louis SC.

“We need to make sure players are held accountable and come back in shape,” said Whitecaps CEO and Sporting Director Axel Schuster at the end-of-season press conference back in October.

Hopefully, Mathias Laborda will be announced early next week and that will be the domino effect on more signings. Once Laborda is announced, maybe we’ll get more clarity on the plans for a new striker. There is still time but it is ticking.

It is very good that the Whitecaps will face a second-tier Bundesliga side in Spain. This is a good wake-up call regardless of the result. It gets the players ready and Vanni Sartini and his coaching staff can see what needs to be worked on. The same can be said for playing MLS competition in California.

I do hope they livestream the preseason games though. That is a good way to give fans a glimpse of what they can expect in the upcoming season.

The NFL and the sports world were shocked and saddened when Buffalo Bills safety Damar Hamlin collapsed on the field on Monday night against the Cincinnati Bengals. It was later revealed that he suffered cardiac arrest.

It was a very tough scene to watch and that is something you never want to see, it also so really hurt seeing both Bills players and even some Bengals players looking emotional. Hamlin is just a guy who plays football to us but to his teammates, he was their friend and like a brother.

It was also heartwarming to see both Bills and Bengals fans stand outside the hospital seeing prayers.

We also got to learn that Hamlin was a very kind person off the field. For instance, he organizes toy drives in his hometown of McKees Rocks, Pennsylvania. He set up a GoFundMe page for his 2020 toy drive with a goal of $2,250 but many have donated since his collapse and it has 8.2 million dollars as of Saturday (January 2).

Hamlin did awake and is breathing on his own as he recovers in the hospital. He Tweeted on Saturday and we even got to see a photo of him smiling

You love to see it. Let’s all wish Hamlin nothing but a quick recovery.

The Seahawks actually have a chance to make the playoffs

The Seahawks need to beat the LA Rams on Sunday and hope the Detroit Lions beat or tie with the Green Bay Packers. Somehow, the Packers are still in the fight too. They need to beat the Lions to make the playoffs.

With Russell Wilson and the Broncos failing to ride all season, the Seahawks already have a top-three pick. Now they have a chance to make the playoffs. It really is crazy how things turned out.

The Rams are already out of playoff contention and the Seahawks should win, right? It’s not that easy. While Geno Smith can run the offence, the defence still can’t stop the run.

It’s going to be a wild finish to the NFL season on Sunday.