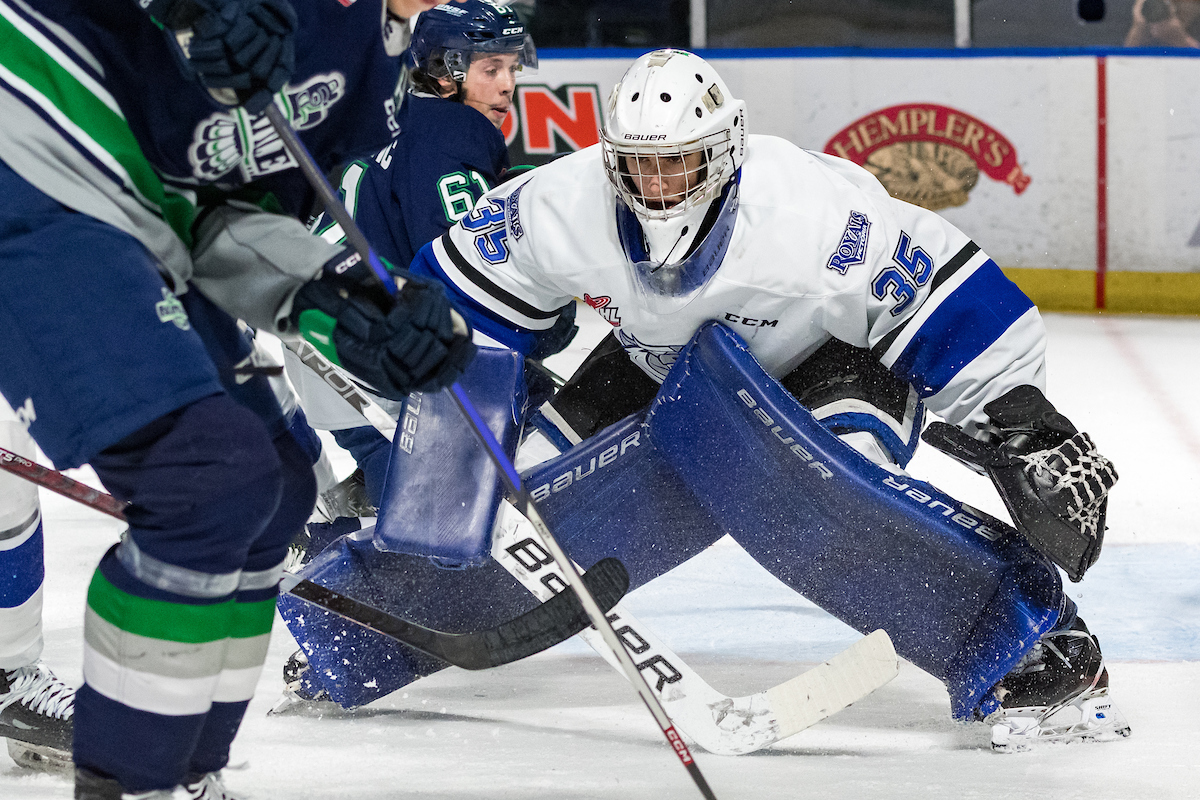 Just one game shy of the halfway mark of the WHL season, the Victoria Royals have had one of the most frustrating first halves to a season of just about any team. Due to injuries, trades (and lack thereof), as well as some growing pains as younger players adjust to the league, the Royals sit with a 7-23-3-0 record at the holiday break.

Hear from Royals general manager and head coach Dan Price on a variety of topics the team has faced in this two-part story, starting with the situation in net.

(Not) In Net – Tyler Palmer

The biggest question with the Victoria Royals right now is focused on what is going on with Tyler Palmer. Having been away from the team since mid-November, sources have indicated to Area 51 Sports Network that Palmer has no plans to return to Victoria. Per Price, there is no definitive plan to trade the 19-year-old. That said, the door has been seemingly left open for a team to make a move and acquire a quality netminder for the second half of the season. Though, nothing truly new was said about a possible move.

“I am comfortable saying this, because I’ve said it on the record before in other interviews,” said Price. “We’re looking at every possible position, as every team does. That’s true throughout the whole year, but as you get close to Christmas and the trade deadline, we’re evaluating the forwards, the defenseman, and the goalies. So I guess, yeah, there are all those different possible scenarios on the table, including potentially a trade if that’s what’s best for the team and that’s what’s best for Tyler, but he would be an active partner in that discussion. We want to make sure that if we were to do that it’s best for everyone involved.”

While Price had no comment on why Palmer requested personal leave from the team, Area 51 Sports Network has been informed that Palmer feels ready to play and is eager to get back to action, it just will not be with the Royals.

All of this begs the question, why have we not yet seen a Palmer trade occur? With two capable long-term netminders in Logan Cunningham and Nicholas Cristiano, moving Palmer for some current assets and/or future picks would no doubt be more beneficial than holding onto a player. There are plenty of teams who are looking to upgrade in net, and Tyler Palmer has more than proven that he can bolster a roster in the crease. Considering a number of moves have already been made, including defenseman Luke Shipley as well as both (F) Anthony and (D) Wyatt Wilson, the trades have been rolling for the Royals. As seen with Mason Beaupit being traded from the Spokane Chiefs to the Winnipeg ICE, there must be a team looking to follow suit and Palmer would be a top trade target for any team looking to make a deep run in the postseason. (Hello, Kamloops Blazers, is that you?)

(Kind of) In Net – Logan Cunningham

Having gone 10 games without a start, Logan Cunningham is seemingly waiting in the wings to show what he can do with a little more confidence.

In nine appearances with the Royals this season, four of Cunningham’s outings have been in relief of either Tyler Palmer or Nicholas Cristiano and he has seen just four full games.

Looked at last season, and even ahead of this season, as the next goaltender coming into Victoria to take a strong 1B spot after the release of OA netminder Campbell Arnold, Cunningham has not quite seen his moment just yet, and you have to wonder if it is coming.

Price commented on the competition Cunningham brings to the position and the mentality he is looking for out of the 17-year-old.

“He’s been doing his work too. With him, it’s like, ‘Hey, as with any goalie, or quarterback, or pitcher, when there’s only one person that can play a position in a given time, your job is to stay sharp, stay ready. When you get in the net, play so well that you can keep it for as long as possible, just like Nicholas is trying to do.’ I think that’s the healthiest way to do it because it allows you to have a good partnership with your goaltending partner, and have a good level of healthy competition in every practice and every game. That’s really what I think Logan is modeling right now is just that healthy competition for that.”

Acquired by the Victoria Royals at the end of November, Nicholas Cristiano has shown that he was a positive addition to the roster already. With four wins in his 10 games with the Royals, Cristiano has essentially taken over as the Starter in Victoria. Though Price noted that he does not like labeling goaltenders as a starter or a backup, with 10 consecutive starts in 10 games on the Royals roster, it certainly seems as though the rest of us can give him that title.

“I feel like he’s definitely earned the next start,” said Price on Monday, Dec. 12. “When it’s his turn to play, which will of course be this week at some point, he’ll have earned that.”

Throughout the week, Cristiano started all three games for the Royals, winning the final two tilts against the Tri-City Americans.

When asked if Cristiano will be looked at as the starter moving forward, Price simply commented: “He has earned the starts that he’s gotten and we have no doubt that he’ll continue to earn more starts in the future.”