Argentina wins World Cup on penalties in best final ever 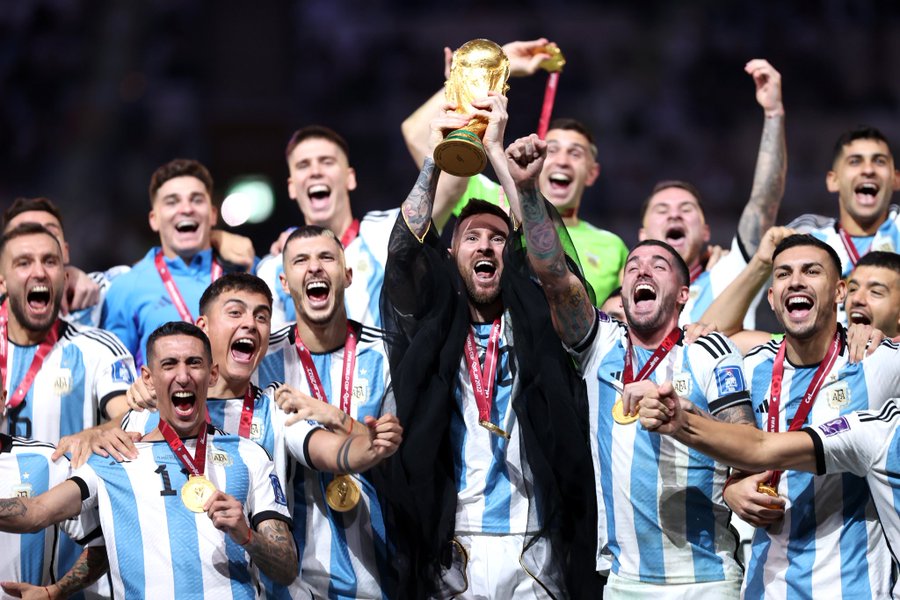 Lionel Messi and Argentina and Kylian Mbappe battled in an absolutely bonkers game. This game was on cocaine. So much happened and I bet you couldn’t keep up.

Don’t worry, let’s go over it all together.

Thoughts on the game

Early on, Hugo Lloris was being tested.

Argentina was playing some beautiful football. They were moving the ball with ease and making good runs. Argentina was putting pressure on the French midfield and back line but Lloris made two early saves.

The Argentines looked very quick on the counter. Messi and Angel Di Maria were leading the charge but they couldn’t find an opening.

France wanted to beat Argentina on the counter as well. However, Argentina looked composed at the back in the early stages. Mbappe, Antoine Greizmann and Olivier Giroud looked isolated.

In the 22nd minute, Ousmane Dembele brought down Di Maria in the box. No doubt about this one, it was a clear trip. Who else but Messi tucked the penalty kick away. He looked calm and composed when taking it. There was no doubt he would score.

The French needed a wake-up call and there is no bigger one than that. By the half-hour mark, they had zero shots on target. I got up at 6 AM for the final and I looked more awake than they did. France needed to listen to System of A Down’s Chop Suey because they needed to do more than just wake up and get a brush and put on a little makeup.

But the Argentines continued their dominance. This counter was a thing of beauty. Messi started it and got the ball in deep for Alexis Mac Allister. At first, I didn’t know why he didn’t just shoot but Di Maria slotted the ball past Lloris and I knew why instantly.

I mean, this is just exquisite football here. France’s defence was torn to shreds.

French head coach Didier Deschamps wasn’t waiting to make changes. Dembele and Giroud were off in the 40th minute for Marcus Thuram and Randal Kolo Muani who made both made an impact in the semi-final against Morocco. I get why Deschamps did that but he should’ve left Giroud on. But Giroud thrives on service and France was getting none of it. Maybe France wanted to beat Argentina on the counter.

Jules Kounde looked bad. He was getting beaten by the Argentinian counters so easily. It also didn’t help he was playing at right-back which is not his natural position. He has played there since the start of the World Cup but he has proven he is not working at right-back at the worst possible time. Kounde is a centre-back and Benjamin Pavard would have been better at that position.

After 45 minutes, it was an Argentine dominance. Will the real France please stand up?

Oh, Yikes. Well, that is what you get with no shots.

But France started to create. It helped that Argentina was sitting back a bit. However, the men in the blue stripes were blocking any passing lane France had.

France really missed N’golo Kante and Paul Pogba in the midfield. Not only can they be reliable defensively but they are also creators. It’s a shame that both of them had to miss the World Cup due to injuries.

Lloris looked like the only French player that showed up. Everyone else was wearing ghost costumes. Lloris made a smart decision to come out aggressively with Mac Allister chasing a loose ball.

I also can’t believe that Mbappe looked invisible. He was making no impact and barely touched the ball. I guess he decided to play the role of Luke Skywalker in The Force Awakens: Missing but shows up for less than a minute. Perhaps Mbappe will show up at the end?

Well, he did. In the 70th minute, Mbappe got France’s first shot that went way over the bar. There he is! Imagine taking 70 minutes to register a shot in the freakin’ World Cup Final. It took them long enough but at the same time, quicker than a delayed BC Ferry on a holiday long weekend.

France got a glimmer of hope when Nicholas Otamendi committed a foul in the box. Mbappe’s pen just beat Emi Martinez. They weren’t done yet.

They clearly won’t and neither was Mbappe. 97 seconds later, Mbappe’s amazing volley beat Martinez and the French were alive. What scenes. I put three bucks on a draw after 90 minutes and cashed out five minutes before Mbappe’s two goals. What the hell man.

Now France was pressing to win it. Maybe Deschamps must have gotten some tactical wisdom from now-ex-Dutch coach Louis Van Gaal. It worked!

There were a few Argentina chances including a Messi bullet that was saved by Lloris but we were heading to extra time. My heart can’t take this.

Both teams looked cautious but determined. They were looking for openings for scoring chances.

The breakthrough came. Who else but Messi. Now it looked like Martinez was offside but it turns out he wasn’t. It looked like Messi’s shot was cleared off the line but it was already over the line. When they needed him the most, he delivered.

But it wasn’t over!

Mbappe got his hat trick with another penalty after an Argentina handball in the box.

There were chances both ways in the box as Lloris and Martinez both made huge saves. But we were going to penalties, it’s a shame because this game was on cocaine. We really had to decide the World Cup by a skills competition.

Mbappe stepped up first and Martinez got a hand on it…but it wasn’t enough. Messi put a cheeky penalty past Lloris. That was a duel of wits.

All pressure on both sides but mostly on the team that misses first.

That was France. Coman’s shot was easily read by Martinez. Then Aurelian Tchouaméni…didn’t even make Martinez make a save. Coman was also stopped by Martinez. When it comes to penalties, he has been among the best at stopping them at this World Cup alongside Dominik Livaković

Argentina made no mistake with their penalties. Saving pens was never Lloris’ strongest trait but Paulo Dybala, and Leandro Parades scored their kicks and Gonzalo Montiel’s winning spot kick will live in the memory of many soccer fans forever.

Don’t cry for me Argentina, you are the Champions of the world!

After a ceremony that dragged and Martinez pretending the Golden Glove trophy was his private part, Argentina was officially crowned champions. I’m not sure why Messi had to wear a special robe. He did look good in it but it was totally necessary. It’s like if you won the lottery and you had to wear a silly hat that said “winner” on it or something.

What a volley this was.

Messi put Argentina on his shoulders for years, often coming up short. Now, he has the prize he has craved for years.

Meme of the day

No disrespect to Cristiano Ronaldo but in my humble opinion, the debate on who is the Greatest of All Time is over. Ronaldo is still the greatest men’s goal scorer of all time. But in terms of overall play, it’s Messi. He is easily the most gifted and smartest player I have ever seen.

Piers Morgan is in shambles as I type this and so is IShowSpeed.

WTF of the day

Yeah, what was Martinez doing here…

L of the day

Well, he got Messi’s age wrong but he was bang on. Now, this guy should tell me the lottery numbers.

Messi is just built different. I’m pretty sure this is the first time the Drake Curse has been broken.

Elias Pettersson knew, he truly is untouchable. Now if only the Vancouver Canucks can extend him long-term.

RIP Grant, you would have loved this game. Hope he was watching from heaven.

Well, this was the best World Cup of all time. This was easily the best soccer game I have ever seen and one I will tell future generations when I’m old.

Thank you for reading our World Cup coverage hear at the Area 51 Sports Network. Nathan Durec and I have worked hard and got up early to watch these games and write these. You can tell who is younger and older in these articles. Nathan likes to do the more traditional approach while I write these in a style inspired by Jason Botchford’s Provies, later Athletties and now called the Stanchies at Canucks Army written by his apprentice Wyatt Arndt.

Botch will forever be my favourite sports writer. He wasn’t a huge soccer guy but he would have been Tweeting his excitement for Sunday’s Final for sure.

As for soccer? It never stops. Club games are back next week and the MLS season is just two months away. That means more articles from Nathan and myself and more episodes of the TerminalCityFC.

What a World Cup. Football is life.