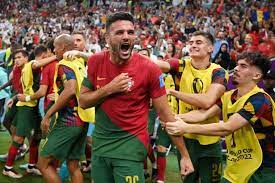 The World Cup Round of 16 has concluded and the quarterfinals are now set.

Now, I get not everyone likes football (or soccer) but if you are not watching this World Cup, you are missing out. This tournament has been amazing and probably has been the best one in recent years. There have been lots of great stories, goals and of course, upsets. That continued on Sunday.

Let’s go over the action.

Spain is no longer the team they once were. Gone are the likes of Xavi Hernandez and Andres Iniesta and in came Gavi and Pedri. Sergio Busquets is the last of Spain’s golden generation that remains.

Spain will be good again but not now. In this game against Morocco, they had all that possession. (77%) and only managed to get one shot on target. Morocco managed two shots on target by the way.

Spain was having problems creating scoring opportunities. That was because of the play of the Moroccan defence and their goalkeeper Yassine Bounou who plays for the Spanish club Sevilla. More on Bounou later, but the Moroccan back line was a brick wall. Morocco captain Romain Saïss was all over the place with his tackles and blocks.

Japan failed to score three penalties against Croatia and Spain should have taken notes from them. Pablo Sarabia, Carlos Soler and Busquets all missed their penalties. They were poorly taken. The same type of shot too, low with not a lot of power.

You got to give credit to Bounou though. He read every penalty like a book. Bounou didn’t even look fazed at all.

Achraf Hakimi scored the winning penalty for Morocco. He was born in Madrid to Moroccan parents, by the way, that is a gut punch for the Spanish

The biggest story heading into this match was that Cristiano Ronaldo was not starting the game.

Ronaldo did not look happy being subbed off against South Korea and many wondered if his attitude did not sit well with Portugal manager Fernando Santos. It turns out, the decision to bench Ronaldo in favour of 21-year-old Goncalo Ramos was a tactical decision and Ronaldo was fine with the decision. Ronaldo did come on as a sub in the 71st minute in place of João Félix.

It also turned out to be a very good decision from Santos.

Ramos only played one game with Portugal before the World Cup and that was on November 17 in a friendly against Nigeria. But after Sunday’s game, Ramos will definitely get more call-ups for his country.

He scored a hat trick against Switzerland and that is the first hat trick of this World Cup. Ramos is also the youngest player to score a hat trick at the World Cup since Pele did it as a 17-year-old in 1958. Both those goals were really well taken as his shot and acceleration were on full display.

Despite Ramos’ hat trick, it was a team effort from Portugal right from kickoff. The Swiss looked gassed by halftime. That was due to Portugal’s fast counterattacks and quick passes. It also didn’t help that Switzerland’s defending was…Swiss cheese. They looked so lost trying to stop the counters and left Portugal open in many areas.

Rafael Leao also scored for Portugal (Chelsea, please sign him) and so did the veterans, 28-year-old Raphaël Gurrereio and 39-year-old Pepe. Pepe is still playing at the World Cup at his age and is still playing well, another example of an ageless wonder.

Portugal’s attack was just too much for Switzerland to handle and they will face Morocco in the quarterfinals on Saturday.

This goes to Ramos’ first goal. It was a top bins banger from a funny angle.

It is quite poetic indeed.

L of the day

Popular Youtuber and Ronaldo fan IShowSpeed flew to Qatar to see his idol. As we all know, Ronaldo did not start for Portugal. What makes this funnier is that this is the third time Speed flew out to see Ronaldo and he did not start all three times.

But Speed might have just tanked his career quicker than Kanye West did on Saturday. This was literally racism from Speed. There is no need for this at a football match or in society.

Portugal beats Morocco on penalties after a 1-1 draw

France beats England on penalties after a 3-3 draw.