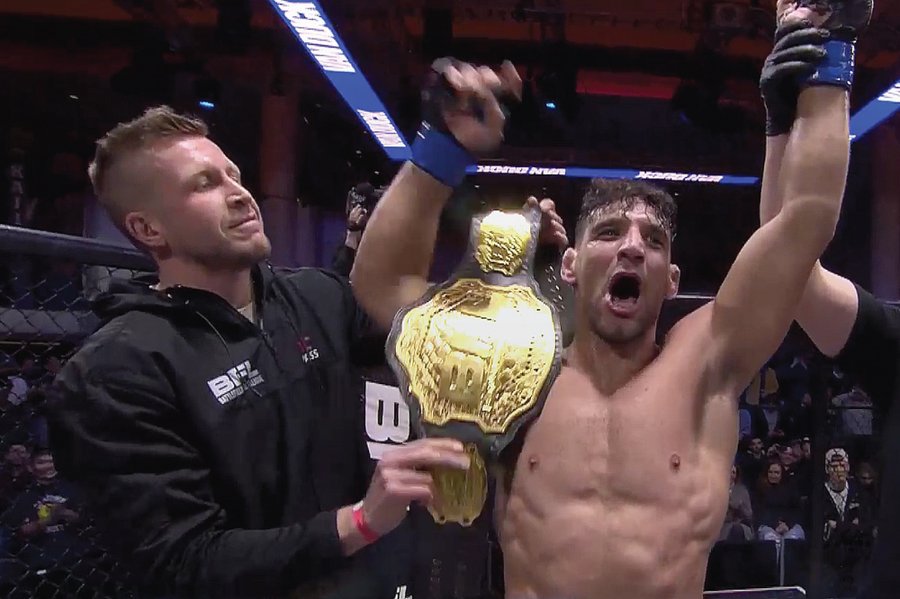 In their landmark BFL 75 card (which took place at the Harbour Convention Centre in Vancouver), Battlefield Fight League showcased another thrilling night of Canadian MMA. Caio Machado was hoping for and appearance on Dana White’s Contender Series this year; instead, he’ll have to settle for an impressive submission win in another title defence.

An interim title was also on the line Thursday night where Christophe Van Dijk took the win. We were also treated to another THREE 1st Round knockouts grabbed by Keanan Patershuk, Gagan Gill and Saeid Mirzaei. All the fights on the BFL 75 main card, along with the BLÜ BONUSES for the night, are described below.

Keanan Patershuk def. Keanan Kellar by TKO in the 1st Round

Patershuk ran in with some heavy striking immediately. Sadly for him, that led to a couple of beautiful takedowns from Kellar. That quickly led to some dominant grappling exchanges for Kellar on the ground. He then slowly made his way to the back of Patershuk, threatening submissions. Kellar eventually got back up a couple times, but was dragged back down multiple times in between some heavy clinchwork. Then, just as it looked like Kellar was going to cruise into the 2nd Round, everything flipped! Patershuk landed some BOMBS on the ground, dropping Kellar onto his back. Sensing blood in the water, he kept hammering him until the ref called him off for an incredible come-from-behind win.

Things started off in the second BFL 75 fight, but things lit up as Yalcin eventually moved forward and grabbed a beautiful takedown. Immediately, there was a clear difference on the ground as Yalcin was smothering him with wrestling and ground and pound. With a DEEP wrap around Sigvaldason’s neck, it looked as though Yalcin was just barely going to snag the finish. Lucky for Sigvaldason, the clock ran out.

With another beautiful trip, Yalcin opened the 2nd Round on top. Sigvaldason wasn’t making it easy this round as he managed to get back up multiple times and threaten a takedown himself. As the round went on though, it seemed as though Yalcin was starting to slow down. He started to get controlled on the ground, possibly down the round. To close out the round, it was Yalcin back on top, really complicating the scorecards.

Interestingly, it was Sigvaldason that opened the round with a takedown, then smothering Yalcin on the ground. It was a slow couple minutes with Sigvaldason on top, but, with about a minute left, he went into 6th gear. He let loose some MASSIVE, very unique strikes on Yalcin, forcing him to give up his back. A finish seemed imminent; amazingly, Yalcin managed to run out the clock. With rounds like that, the BFL judges could have gone either way. Personally, I’d have actually scored it 28-28, giving a 10-8 to Sigvaldason in the 3rd Round. In the end, the judges were split, scoring it 29-28, 28-29 and 29-28 for Yalcin.

Gagan Gill def. Ryan Rohovich by KO in the 1st Round

Both men were landing strikes early, clearly very even on the feet. The momentum then shifted towards Rohovich as he grabbed a HUGE takedown. It got dangerous for Gill from there as he was stuck in a guillotine a few different times. Incredibly, Gill managed to turn it around on the ground, grabbing control. They then moved back to their feet where Gill stole the show. Gill landed a couple of nice combos that had Rohovich wobbled. From there he landed a MEAN left hook, putting Rohovich out clean at the very end of the 1st Round.

Mitch Strazzella vs. Austin Russell ends in a No Contest

Strazzella was the one pressuring early with his striking, backing Russell into the fence. Russell responded with a takedown, on top less than a minute into the fight. From there, Russell controlled him and shredded him with ground and pound for a few minutes straight. Strazzella managed to get back up and eventually threaten a NASTY guillotine, but clearly dropped the round on the cards.

Something strange happened to open the round; a completely illegal up-kick was landed, blinding Russell. Completely unable to defend himself, Russell was then quickly finished by Strazzella. Upon viewing the replay, it was revealed that the shot was indeed VERY illegal. This rightfully led to a No Contest ruling.

Saeid Mirzaei def. Hamza Salim by TKO in the 1st Round

This was the quickets fight of BFL 75. Salim pushed the pace early with his striking, but it was Mirzaei that landed big first. As soon as he landed his first huge combo, the fight was all over with Salim on his back.

Christophe Van Dijk def. Matt Dwyer by KO in the 2nd Round

Van Dijk made the first move, throwing Dwyer straight into the canvas. Van Dijk was dominating from there. Dwyer briefly made it back to his feet, but was then thrown over the head of Dwyer. Dwyer then found himself on top after threatening a NASTY guillotine. Eventually, Van Dijk recovered, finding himself on top and likely taking the round on the cards.

The 2nd Round started off dead-even, then quickly shifted towards Van Dijk as he landed another slick judo trip. The fight exploded from there as both men were unleashing some wild grappling exchanges. With another takedown, this time it looked as though Van Dijk was going to grab the first submission of the night. Dwyer got back up, but was then LEVELLED by a head kick from Van Dijk, putting him face-first into the canvas.

Caio Machado def. Edison Lopes by Submission in the 1st Round

Machado ran in immediately with HEAVY combos. He backed Lopes into the cage, but that’s where Lopes took over, using brute strength to control the defending champ, Machado. The next couple minutes were spent jockeying for position along the fence with Lopes taking the top position. Sadly, Lopes was exhausted when the fight returned to the feet. He was swiftly taken down and smashed by Machado. With 30 seconds left in the round, he was raining down HUGE shots. Giving up on the ground and pound, he switched over to a NASTY armbar. It looked as though Lopes was going to ride it out, then with ONE SECOND left on the clock, he was forced to tap.

Sub. of the Night: Caio Machado

Brawl of the Night: Matt Dwyer vs. Christophe Van Dijk

After another title defence, grabbing a rare submission win in the heavyweight division, it’s still very clear that we’ll be seeing him get a shot on the Contender Series. His last DWCS was cancelled, but with this win, he’ll be sure to get that call next season.