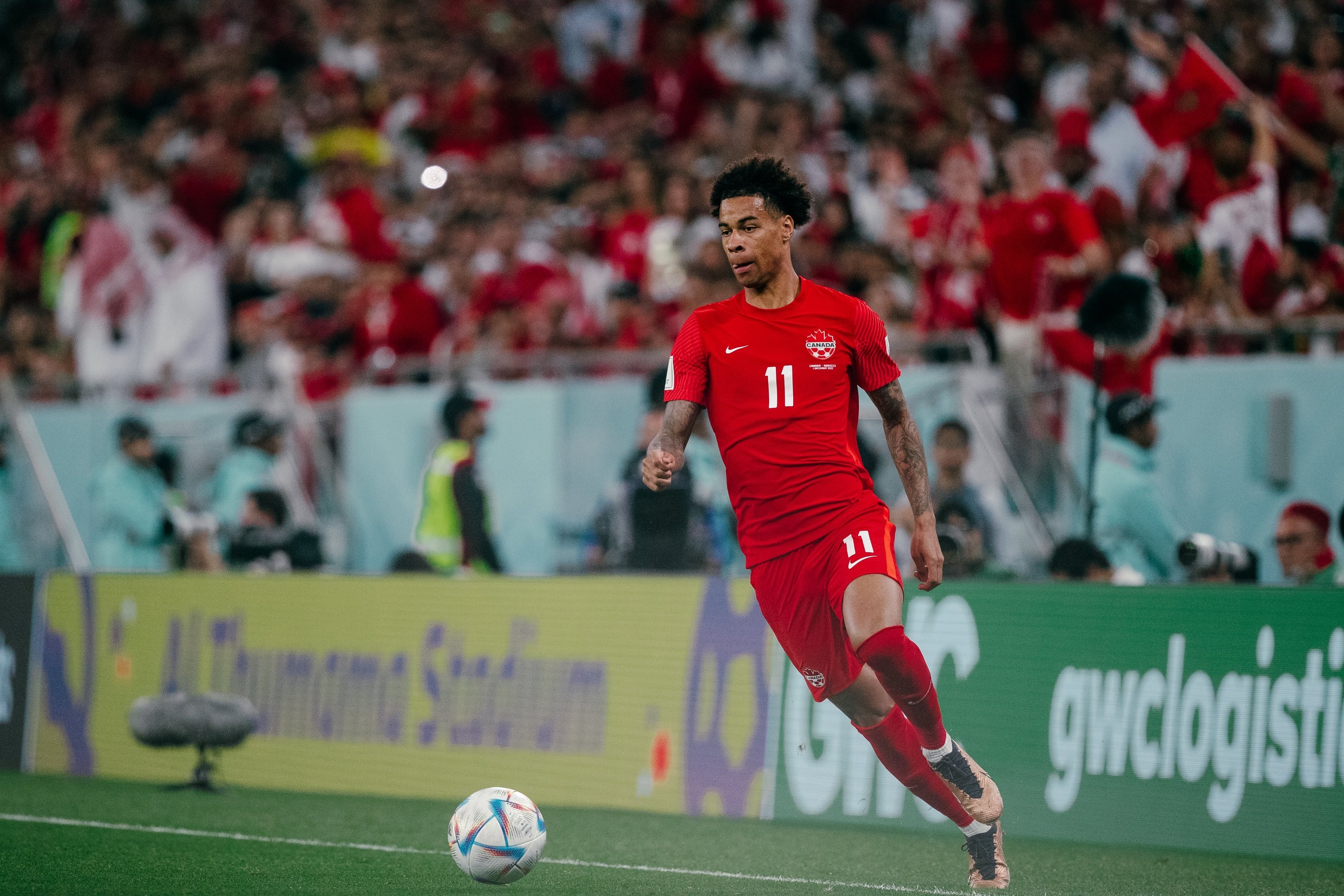 Already eliminated, Canada could prove the spoilers for Morroco depending on the result in the other Group F match. But it was not to be as Canada lost their final match 2-1.

It was not the start Canada wanted. Steven Vitória was caught making a poor pass back to Milan Borjan, but the Canadian goalkeeper did not deal with it any better. His clearance landed right on the foot of Hakim Ziyech. The Moroccan player chipped the ball up and over everyone and into the net, giving the African nation the lead in the 4th minute.

Morocco added another in the 23rd minute off a hard, low shot to the near post. Youssef En-Nesyri broke through the Canadian centre-backs to get on the end of the long, overhead ball. It was a goal that Borjan should have had and will be kicking himself over.

Canada needed a goal before the half to get back into his match, and they got it through a brilliant run by Sam Adekugbe. His cross from high on the left wing confused Nayef Aguerd as his attempted clearance ended up putting the ball past his own keeper in the 40th minute. It was a much-needed confidence booster just before the half.

Morocco thought they had another in stoppage time of the first half, but it was called back for offside. Canada’s defending had been highly suspect throughout the half, and they would be thinking themselves lucky to have gotten back into the match with a goal and only down by one.

Les Rouges came out for the second half much more positive in possession. Morocco was content to sit back with 11 men behind the ball and absorb anything Canada could offer.

But as soon as Atiba Hutchinson and Ismaël Koné came on around the hour mark, Canada began to turn their possession into opportunities. Hutchinson almost had one in the 71st minute, but this effort went off the crossbar, bounced in the line and was cleared. Alistair Johnston had a rebound chance, but his header went just over the bar.

Alphonso Davies almost had a chance in the 87th minute after Yassine Bono mishandled the ball. He was able to recover and get his hands on the ball in his 18-yard box, but it demonstrated yet again the positive play of Canada in the second half.

Canada pressed for chances in the final minutes, but Morocco was able to hold and guarantee their spot in the Round of 16. There were no wins for Canada, but there were invaluable lessons for them to take as they bowed out gracefully in the end.

This is a history between these two nations. They have played three times in friendlies with Morocco winning on two occasions and a draw in the other.

Croatia and Belgium play to a nil-nil final

Belgium had work to do if they had any hope of qualifying out of Group F. But Croatia also had much to play for. In the end, a nil-nil draw favoured Croatia more than it did the Belgians.

Ivan Perišić had an opportunity just seven seconds into the match, but he sent it wide. However, it showed Belgium exactly what they would be up against.

Croatia was awarded a penalty in the 15th minute after Yannick Carrasco took down Andrej Kramarić in the 18-yard box. Luka Modrić, Croatia’s captain, stepped up to take the shot but then VAR stepped in. It was deemed there was offside before the foul would have taken palace and the penalty was overruled.

After the half, Thibaut Courtois was repeatedly tested by Croatia. The Real Madrid goalkeeper was up to the task, sending each one clear of the net.

Romelu Lukaku came on as a Belgian sub and had numerous chances, but he was never able to find his finishing form.

The game would play out to a scoreless draw even though both nations had plenty of opportunities to take the match. With that score, Belgium went out of the World Cup and Roberto Martínez stepped down as the manager of the side.

Belgium and Croatia have met eight times before in their footballing history. They split the series with three wins apiece and two draws.

Germany came out flying in this match, knowing they needed not only a win but also needed help from the Japan-Spain match. But their 4-2 win was not enough as they were eliminated in the group stage for the second World Cup in a row.

They were rewarded for their early efforts. Serge Gnabry got his first of the World Cup with a beautiful header in the 10th minute. The ball came to him unmarked as he hovered near the 6-yard box, and he made no mistake. It was a ball that came by way of disappointing defending from Costa Rica.

Germany did not let up. They kept pushing Costa Rica, finding the spaces behind the line and hitting chance after chance. If not for the efforts of Costa Rican goalkeeper Keylor Navas, this match would have been done in the first quarter of the match.

Costa Rica was forced to deal with the pressure. They did get a decent opportunity in the 43rd minute as Keysher Fuller got in behind the defensive line of Germany. But this shot was palmed over the bar by Manuel Neuer.

The Central American side made things interesting in the second half. Yeltsin Tejeda scored in the 58th minute with a rebound, ending a furious Costa Rican attack. It turned Group E on its head as news of Japan tying and then leading Spain came in.

And they were not finished. Costa Rica scored again in the 70th minute off a free kick. The ball went into the 18-yard box, finding Kendall Waston, who hit it back across. It was eventually put in by Juan Pablo Vargas, giving Costa Rica the lead and a possible way into the Round of 16.

But Germany found life as their dreams were on the line. Kai Havertz tied the game in the 70th minute, giving Spain in the other Group E match a sigh of relief.

Havertz added another in the 85th minute, a brace for the substitute. But while it gave Germany the lead in the match, it was not enough to go ahead out of the group stage. Even Niclas Füllkrug’s headed goal in the 89th minute would not do it for Germany.

Germany will be left with questions about their program, their manager and where they need to go from here.

There is only one match to look at in the footballing history of Costa Rica and Germany. Germany won against the Central American side 4-2 in World Cup 2006.

A win would keep Spain on top of the group, but a loss would see Japan leapfrog over them. And that’s exactly what happened as Japan took the match 2-1, finishing top of Group E.

Spain did get started how they hoped with a goal by Álvaro Morata in the 11th minute. It was his third goal in the tournament for the striker, tying him for the top of the Golden Boot race.

But Japan would get the final laugh. Ritsu Doan found space at the edge of the 18-yard box in the 48th minute. His laser shot was palmed by the Spanish keeper, but it was enough from it to find the net.

Only two minutes later, Doan’s cross found Kaoru Mitoma who played it back across the face of the goal. Ao Tanaka’s knee connected with the ball only a foot out of the net for the easy goal.

Initially, it was ruled out of bounds, but VAR reviewed it and found it a good goal by the slimmest of margins. In just 142 seconds of time, Japan had gone from an elimination spot to leading the group.

And that’s how it would play. Japan stunned Spain and the entirety of Group E to top the group and go on with their Spanish opponents.