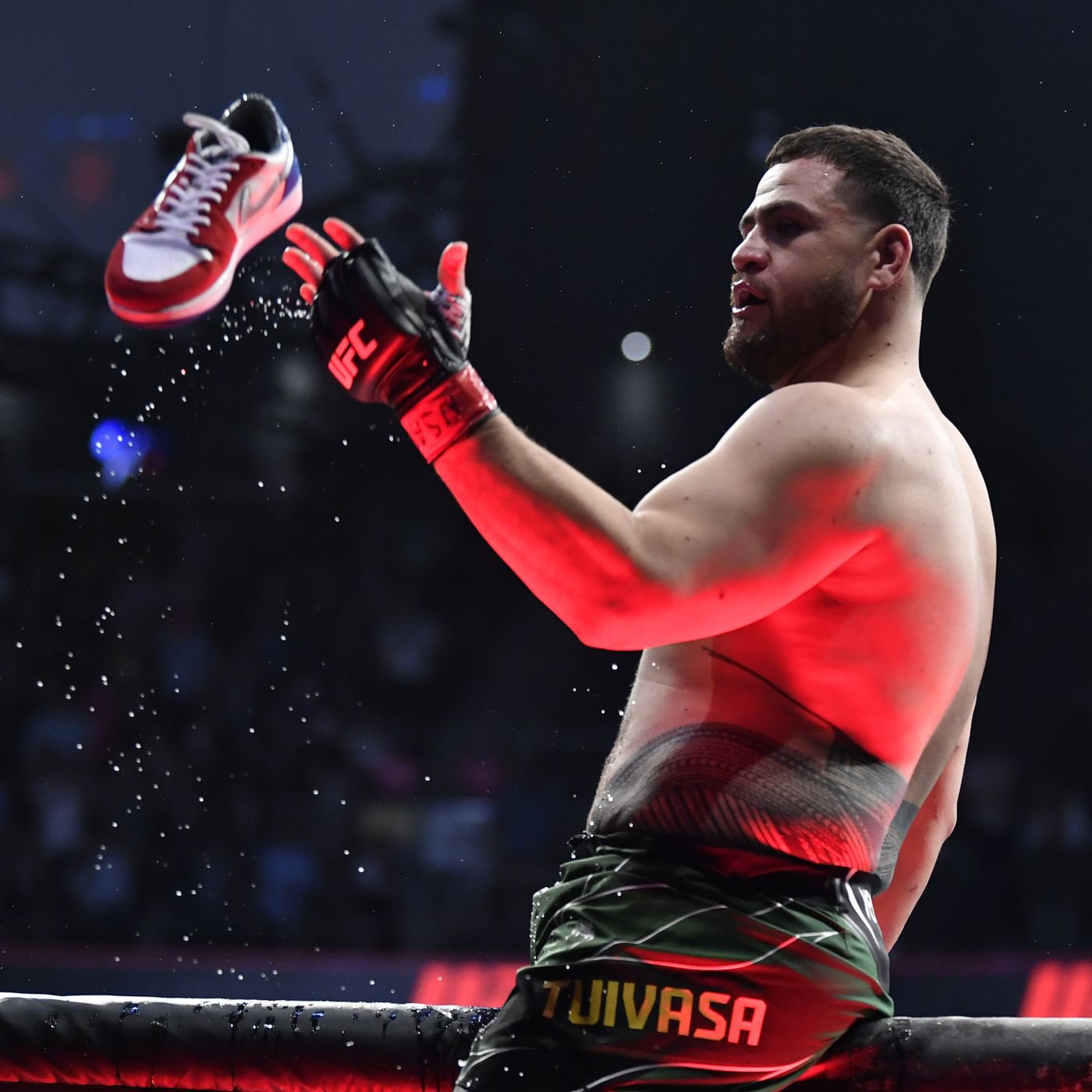 Following a short break, the UFC is coming back strong with a lengthy, talent-filled 15-fight card with UFC Orlando.

The night will ultimately close out with an intriguing striking battle between ‘Wonderboy’, Stephen Thompson, and Kevin Holland. Another striker’s delight will also take place on the main card as a couple of knockout artists, Tai Tuivasa and Sergei Pavlovich, are looking to grab another highlight reel finish.

A couple of entertaining women’s matchups are also looking to steal the show. Yazmin Jauregui and Istela Nunes will open the card with a bang, while Tracy Cortez and Amanda Ribas will clash to climb the top 15 flyweight rankings.

Finally, we’ll see famed UFC veterans like Rafael dos Anjos, Jack Hermansson, Angela Hill and Clay Guida. All of these matchups (plus more) are covered below and feature BLÜ’s predictions along with the Bet99 Sportsbook Odds.

Daukaus got caught in his last one as he got finished by the underdog, Roman Dolidze. Other than that he’s been a pretty impressive prospect. On the other side, Anders is 37 and hasn’t been performing his last few fights. Given their styles, I don’t anticipate a finish from either man. Instead, I’d expect a hard-fought decision win for Daukaus.

Dolidze’s last two wins were impressive. He grabbed two 1st Round finishes in UFC this year. Sadly, Hermansson’s patient, methodical style, will likely completely negate Dolidze’s path to victory. He won those last two fights because his opponents rushed in, not giving him respect. That’s not how Hermansson fights. His win over Chris Curtis showed us Hermansson’s true potential. With that, he should be able to win a close, likely boring, decision.

I think the only way this fight is ending with these two powerhouses is with a KO. Given their recent performances, there also seems to be a clear frontrunner. Tuivasa just came off a fight against the uncrowned champ, Gane, where he was eventually finished. What gives him a clear edge here though is that he knocked Gane down on his back; a feat that even N’Gannou himself couldn’t do.

Meanwhile, Pavlovich hasn’t really made a huge statement. On paper, his win over Lewis is impressive, but a CLEAR early stoppage has destroyed any credibility from that win. Tuivasa is too fast and powerful; he should be able to roll with the punches, grab another KO and slam another beer after his win.

Although this matchup will inevitably lead to a thrilling battle, one man has a definitive advantage. Since getting dropped from the UFC in their purge of the flyweight division in 2018, Nicolau has returned with 5 straight wins. His last 3 wins have been the most impressive by far, beating ranked contenders Manel Kape, Tim Elliott and David Dvořák.

Meanwhile, Schnell has struggled against his ranked opponents, losing to Royval, Bontorin and Pantoja. What do all three of those men have in common? They’re all threats on the ground. Nicolau is yet another threat on the ground. He’ll either grab a submission or a fairly dominant, but exciting, decision win.

This matchup also has a VERY clear favourite. Barberena got lucky in his last two, winning a split decision over Matt Brown, then getting gifted a Robbie Lawler matchup. On the other side, RDA is still a genuine top 10 threat at both lightweight and welterweight. He just fought Fiziev, and seemed to possibly be heading towards a win before his KO loss. This is a mismatch of epic proportions and shouldn’t be close at all. RDA will likely dominate Barberena with his grappling, easily winning on the cards or grabbing a slick submission finish.

Finally, the UFC has given both ‘Wonderboy’ Thompson and Holland a good matchup. They’ve both been thrown at the grapplers and have both somewhat struggled. It should also be pointed out that, although both struggled, Thompson is MUCH better at defending takedowns. This is important because it tells us that, if Holland decides to turn to grappling, Thompson will quite easily be able to shut that down.

All of that indicates this fight will be spent entirely on the feet. At that point, you just have to figure out who will be the better striker. Holland surely has a better chance of finishing the fight with his length and power. However, he has to actually land something BIG to get that done. Given ‘Wonderboy”s legendary movement and striking accuracy, I just can’t see that happening. As the fight rolls on, Holland will lose that finishing ability, allowing Thompson to win on the cards. It’ll be entertaining and, most likely, very close, but over 5 rounds, Thompson holds the edge.

This fight is early in the night, but it’s a matchup that should be on everyone’s radar. Cortez has had an almost flawless MMA career, going 10-1, only losing in her MMA debut. In that time she beat Blanchfield and Agapova outside of the UFC, plus Egger and Gatto since joining the UFC after her win on the Contender Series. Ribas has also been impressive in the UFC, only losing to top contenders Marina Rodriguez and, most recently, Katlyn Chookagian.

If you’d have watched Ribas’ fight against Chookagian, you’d have probably given Ribas the win in the split decision. With her ability to control a bigger striker on the ground, Ribas has a great chance of winning this fight against another striker. That being said, given her track record, plus her recent win over Gatto, I’ll have to give the edge to Cortez. It also helps that she trains with her boyfriend, top featherweight contender, submission expert, Brian Ortega.

In another ranked women’s matchup, we’ve got another close battle. In this one though, it’s a classic veteran/rookie matchup. Ducote just made her UFC debut a few months ago, beating Jessica Penne in a decision. With 18 fights in the UFC before this weekend, Hill is definitely the veteran. Sadly, most of her recent fights haven’t gone her way, going 2-5 in her last 7. What’s worse (for her); three of those recent losses came from a split decision.

Just like the previous matchup, this could head in either direction. Ducote hasn’t really been tested all that much, while Hill just grabbed a surprising win over ‘Loopy’ Godinez. With that recent win, I’d normally be leaning in Hill’s direction. Even though she dominated the last two rounds of that fight, you have to keep in mind that her opponent took that fight on VERY late notice, resulting in some compromised cardio. It’s close, but with Hill slowly closing in on 40 and Ducote still under 30, I have to give Ducote the slightest edge. I wouldn’t be surprised if this was another case where Hill is in a split decision.

Here I highlight some betting lines that you might want to take advantage of for UFC Orlando. These are odds that favour the bettor. Although some of them may conflict with my picks, they offer a fair reward for a slight bit of risk.

The Underdog Clay Guida at +140

Both of these men are near the end of their careers, the only difference is their activity and pace. Holtzman hasn’t been an active fighter the past couple years and hasn’t been winning; Guida has. Guida has also won recently, plus he was robbed in a split decision against the ‘Olympian’ Mark Madsen. I’m sure it’ll be close and WILD, but I’ve gotta give Guida the edge.

The Underdog Tai Tuivasa at +171

When two knockout artists collide, either man could get the finish. This already gives great value to the underdog. That aside, Tuivasa knocked down Ciryl Gane and finished countless other, larger men like his current opponent. With his extra speed and seemingly unavoidable striking, he should be able to get it done.

The Underdog Stephen Thompson at +140

As this seems to be a pure striking matchup, you have to go with the more technical, quick and smart striker. Thompson has the edge in all of those categories. Holland has the power, but that will fade as the fight goes on. As long as ‘Wonderboy’ can avoid the power with his movement, he should win this decision.