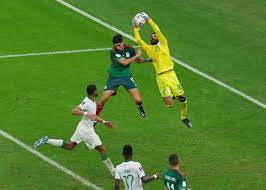 It was a wild day at the World Cup in Qatar.

The fates of Group C and D were decided today. We got to a point where cards could have been used to determine who goes through to the knockout stages.

Well, this is kind of surprising.

However, there is a large Tunisian population in France and apparently, half of the Tunisian squad was born in France. So this win meant a lot to Tunisia.

Despite France playing their B team, they still dominated the possession game. But Tunisia looked better in attack. They got the breakthrough when Wahbi Khazri sped through the French midfield and beat Steve Mandana.

There were a lot of young players in the French squad including Edouardo Camavinga, Ibrahim Konate and Mattéo Guendouzi. Today was a good learning lesson for them.

It looked like Antoine Greizmann tied the game in the dying stages of the game, but VAR disallowed the goal due to offside. I might get hate for this, but that was the right call.

Look at the picture below. As the ball is being delivered, Griezmann, along with what looks like two other French players are standing beyond the Tunisian defenders. Therefore, that is offside.

Despite Tunisia going home, their fans will remember this game for a long time.

They had to beat Denmark, a team that reached the final four of the Euros a year ago. After the run they had last year, it is a big disappointment for the Danish.

No one expected Australians on hopium expected the Socceroos to make it out of the group, but here we are.

Denmark controlled the ball well in the first half. Their passing was crisp and they looked fast on the transitions. Mathew Ryan stood tall in goal and the Australian defenders managed to hold the line.

But Australia came out flying in the second half. They looked quicker than in the first half, especially on the transitions. It looked like they were beating Denmark at their own game. Mathew Leckie etched his name into the Australian soccer record books with an incredible 40-yard dash which saw him nutmeg Joakim Maehle and beat Kasper Schmeichel.

Once again, expected the unexpected at the World Cup.

My hottest take heading into the World Cup was that despite a weaker squad, I thought Mexico would squeak into the knockouts.

I was so close to being Nostradamus.

Mexico was all over Saudi Arabia with 11 shots on target and 26 total. They looked hungry for goals.

Both their goals were off set-pieces. Henry Martin pounced on a loose ball on a corner kick and Luis Chavez scored which will likely be the best free-kick goal of the World Cup.

But Mexico couldn’t capitalize on the rest of their chances. With Argentina’s 2-0 win over Poland, (more on that below) they needed to score three in order to move to the knockouts, as we all know Poland moved on thanks to goal differential.

Mexico had two goals called off due to being offside, missed good chances, messed up in the final third and Mohammed Al-Owais stood on his head.

Salem Aldawarsi put the nail in the coffin on Mexico’s hopes in stoppage time. Mexico barely had to defend all game and that was just Saudi Arabia’s second shot on target.

Mexico won but is still going home and will not play in the knockouts for the first time since 1978. That’s gotta hurt and I’m Mexicans are playing the Sound of Silence (in Spanish) on repeat.

Poland is through to the knockout rounds but they should be ashamed of their performance against Argentina.

Argentina was all over them and they didn’t even register a single shot on target. The only Polish player to show up today was goalkeeper Wojciech Szczęsny.

He stopped his second penalty of the tournament and this time, it was on Lionel Messi.

Robert Lewandowski was nowhere to be seen today as the Argentinian defenders and midfield were all over him. Alexis Mac Allister and Julian Alvarez got the goals for Argentina.

Argentina will face Australia in the round of 16 while Poland will face France.

The goal of the day

To be honest, I thought it was a soft call but good on Szczesny once again.

Fans of the day

I don’t think anyone in Australia went to sleep or work or school after a massive victory.

Emiliano Martínez should have just gotten his phone out and played PUBG or something because all he did was just stand there the whole game.