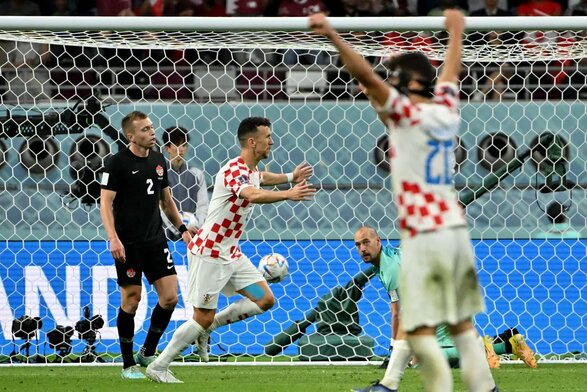 I didn’t have a lot of expectations for Canada heading into the World Cup. I expected nothing and was still let down. *Sigh* But they did score a goal! That’s something!

This hurts but I’ll explain later why you should be proud of our Canadian Men’s National Team. But as we have done here at the Area 51 Sports Network, we are going to go over all the games that happened on World Cup match days.

Costa Rica beat Japan with just one shot on target

Both these teams had something to prove after their first games. Japan wanted to prove they were going to be different in this year’s World Cup after their upset over Germany. A win would see them in the knockout round.

Costa Rica was coming off a historic defeat which was a 7-0 beat down by Spain. They needed to prove that they were better than that and can bounce back.

This game was another example of FIFA in real life. Japan was dominating. They were poised to score. But veteran goalkeeper Keylor Navas and the Costa Rican back line (which included former Vancouver Whitecap Kendall Waston) put on a solid display of defending. Navas was making great saves and the defenders were making huge blocks and tackles.

Players like Takumi Minamino, Takuma Asano and Yuki Soma couldn’t beat Navas or the Costa Rican defenders. It was a late goal by Costa Rica’s Keysher Fuller that got the three points. Japanese keeper Shūichi Gonda should’ve handled the ball better as it went off his fingers.

Japan was the better team but Costa Rica showed you have to be good to be lucky and lucky to be good. That one has to sting for Japan. Getting FIFA’d in real life is just a terrible thing. Time to smash the controller!

The World Cup can be unpredictable and we already have a third upset! Well, four if you count Costa Rica beating Japan, I do.

Belgium despite the win, did not play well against Canada. The second-ranked team should beat 22nd-ranked Morocco, right? Nope.

This match showed that star power doesn’t always win. Hakim Ziyech was named the man of the match and rightfully so. He was creating so much offence for Morocco and led the attack.

The Belgians didn’t look threatening in attack. Michy Batshuayi looked invisible as did Kevin De Bruyne and Eden Hazard. It really does look like Belgium misses a fully fit Romelu Lukaku who did come on late in the game but made very little impact. Lukaku is fast and physical which are two things the Belgian attack lacked in this game.

The Moroccans were creative and fluid as Romain Saïss scored on a free kick from a tough angle and Zakaria Aboukhlal sealed the deal in stoppage time. Morocco was also doing a good job defending Belgium’s attack.

Great for Morocco but not a good look the second-ranked team in the world.

Canada eliminated as Croatia F’ed them up

It was a great start for Canada as history was made. Tajon Buchanan’s cross found Alphonso Davies’ head as he scored Canada’s first goal at a men’s World Cup just over a minute into the game.

If only we could live in that moment forever because it was all Croatia after the goal.

In the Belgium game, Canada came out with high pressure and quick ball movement. They did against Croatia and scored but they couldn’t maintain it. Why? For starters, Croatia are a very good soccer team and the midfield alone of Luca Modric, Mateo Kovacic and Marcelo Brozovic made life very difficult for Canada.

Canada had trouble getting up the pitch because of them and was constantly being pickpocketed of the ball. It didn’t help that there were so many careless turnovers too.

Atiba Hutchinson struggled to stop the Croatian attack and so did Alistair Johnston. I think those two struggled the most. Kamal Miller was working hard trying to defend but he gave the ball so carelessly on Lovro Majer’s 4-1 goal.

Canada couldn’t get burned on the Croatian counter-attack and that is what happened on Andrej Kramaric’s first goal. After that, Croatia had momentum and was all over the Canadians.

I expected more from Jonathan David in the World Cup. Once again, he looked too isolated and his only chance was a shot that didn’t even hit the target. He needed to be involved more.

In the end, Croatia’s experience provided lessons to be learned for Canada. It hurts but it is a good learning lesson. After all, there is the last group game against Morocco still to be played on Thursday.

With our women’s team being Olympic champions and poised to go far in the 2023 Women’s World Cup and the men qualified for the men’s World Cup for the first time in 36 years, it is a golden era of soccer in Canada.

Canada’s men’s national team learned tough lessons but has a bright future. Alphonso Davies, Jonathan David and Tajon Buchanan lead the way. There is also lots of room for improvement and growth.

No one expected Canada to qualify for the World Cup let alone finish first in CONCACAF. They won the hearts of many Canadians and got the attention of the world. The 2026 World Cup will be held in Mexico, the United States and Canada. There is lots of time to build and improve until then.

There are lots to be proud of for Canada’s first World Cup since 1986 and I think they will be fun to watch for years to come.

This loss was also karma for John Herdman’s comments after the Belgium game. They f’ed around and found out.

Germany looked very bad in the first ten minutes as it was all Spain. But they slowly started to get going.

It looked like Antonio Rudiger scored but he was a tad offside.

Spain’s ball movement was great to watch especially from Pedri, Gavi and Ferran Torres. They got the breakthrough with an Alvaro Morata deflection in the 62nd minute. With Germany having already lost to Japan, it looked like they were on the verge of elimination.

But they found a way. That was thanks to Niclas Füllkrug’s 83rd minute. What a story he is. Füllkrug was playing in the German second division last year, is currently the Bundesliga’s goal leader and now has scored an important goal for Germany in the World Cup. Incredible.

That also shows that Germany needs a legitimate striker upfront. Kai Havertz can play striker, yes, but that isn’t his natural position.

In the dying moments, Leroy Sane had a chance to win it for Germany by running down the left wing but he (poorly) attempted to run around Unai Simon but the defender managed to stop him in time. I don’t know why he didn’t just shoot it.

Alarming indeed for the second-best team in men’s soccer. Belgium desperately needs a win over Croatia.

We are going with Füllkrug’s goal because the build-up was so nice.

If this game came into the locker room at halftime and gave the entire team Shwarma, Canada would have won. Or maybe not.

WTF of the day

What in the world was up Hutchinson’s nose? Whatever it is, I hope it helped stop his nosebleed.