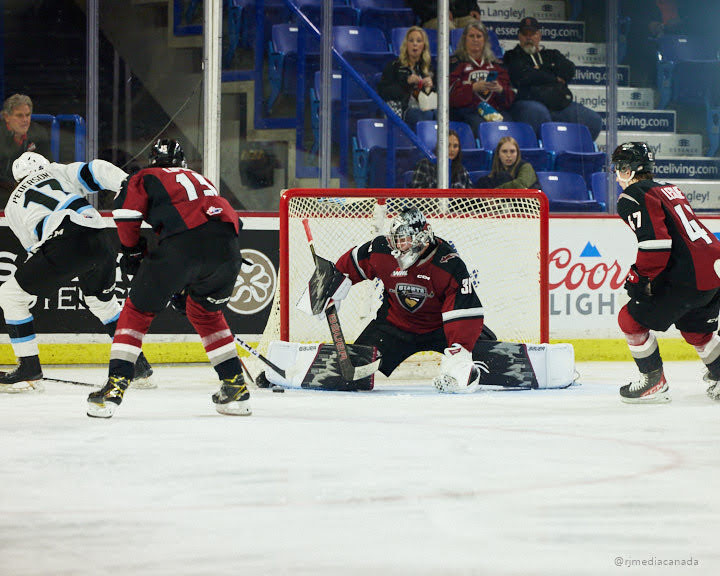 Playing in goal is not an easy task. From the physical toll it takes on one’s body to the mental excursion of bouncing back after giving up a goal, it is one of the hardest positions to play in sports. In this two-part series, Vancouver Giants goaltender Jesper Vikman takes us through what it is like to be a goaltender. Here is part one, which focuses on the physical and mental parts of his game.

Building Up Endurance to Last an Entire Game

“It’s something you have to get used to. From an early age in Sweden, you start off playing shorter games. 40 minutes and then, after a while, 60 minutes. A lot of it is developing physically like everyone else, but also, your cardio has to be top-notch. You are going to play a lot of games during the season and maybe back-to-backs. Also, being able to handle those tougher games with up to 40, or 45 shots, it can be tough. It is not always the shots that is not always the hardest part.

“It’s about being ready at all times. There is a lot of movement, and it is always about preparing for the shot. You do all the hard work before the shot comes, so saving the shot should almost be the easiest part. From a physical standpoint, your legs have to be strong enough to push into new angles and set your feet. That is something I worked a lot on, especially because I am a bit taller. I need to be a pretty explosive goalie, being able to move from point A to point B.

“Having good core and upper body strength and being able to get over and not be compact. Not having your arms falling behind or anything like that. You want to be set and have your body square as much as possible. The whole body has to be strong. From an injury standpoint, you should be able to play a lot of games and not get hurt.”

Stretching and Warming Up

“I don’t do anything special from what the players do, to be honest. I try to focus a lot on dynamic warmups. Not a lot of static stretching because if I over-stretch, I feel a bit sloppy. I feel like my muscles are getting too stretched out, and I want to have that mix of being flexible during the game and also having those explosive muscles firing. It is mostly a dynamic warmup. Other than that, it’s nothing really special. Obviously, I want my hips and groin to feel loose. That is probably the main part, but other than that, I want most of the muscles firing all the time and being as explosive as possible.”

Bouncing Back After a Goal

“For me, that is probably one of the strengths in my game that I have developed over time. It is just a challenge. You have to play your game and focus on the next puck. Don’t get upset if you let in a goal. I’m trying to just play the game and, at the end, try to look up at the scoreboard and see the results. I know that I can’t think of anything that has happened in the past or what is coming. I need to focus on what is there and then and be ready for the next shot all the time. I’m not trying to overthink too much, especially goals that just happen, because I know I can’t control it in that moment.

“That is something I know I maybe struggled with a bit when I was younger, but now that I’m older, I understand what I have to do to bounce back from a goal. Maybe it’s a bad goal or a tough one, but you still analyze it quickly, but you flush it pretty quick too.”

“I would say nothing really changes. You have your pre-scout with your team about on the power play and who is a threat. Who is the shooter, and who is usually passing. We play against most of the games more than one time, so I kinda know who the more obvious threats are on the teams. For me, nothing really changes. Every puck is a new puck, and you have to treat it as a new puck. If he shot glove side earlier, you can’t expect him to switch it up and go blocker side this side. You just have to read and react all the time and not cheat the game.”

We hope you enjoyed part one of this two-part series. Keep an eye out for part two coming out shortly, which looks at on-ice game scenarios.

Dylan Anderson: Happy To Be Home