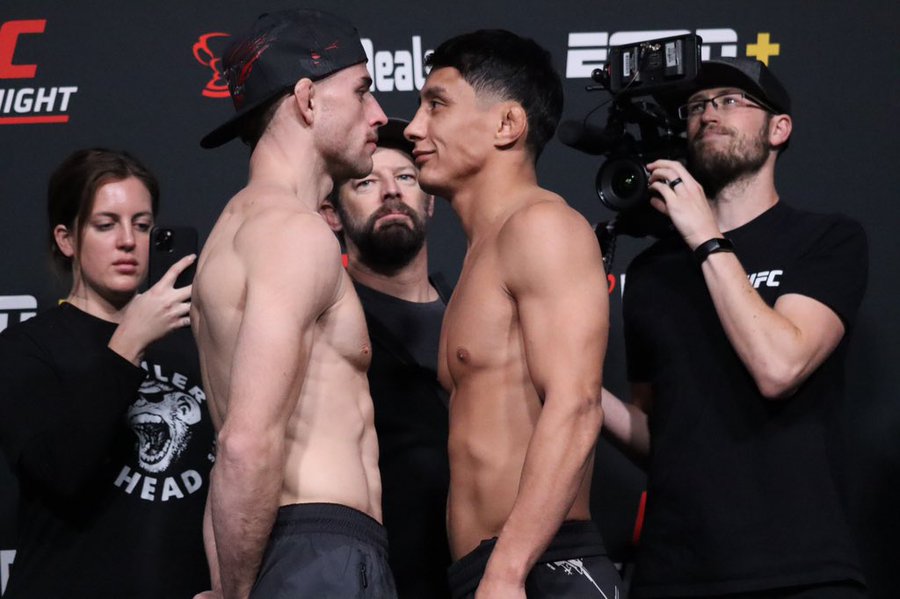 The UFC returns with an early morning card this Saturday for another edition of UFC Vegas.

The main card will close the night with the big men, Derrick Lewis and Sergey Spivak, taking the main event. The rest of the main card is filled with powerhouses like Jack Della Maddalena, Andre Fialho, Ion Cutelaba and Kennedy Nzechukwu.

Interestingly, all the prelims have been taken up by the smaller fighters, all between strawweight and bantamweight. They may be small, but there are some big names early in the card. TUF 29 champ, Ricky Turcios is back, along with fellow finalist, Brady Hiestand. As the card moves on we’ll see the return of flyweight standout, Zhalgas Zhumagulov, as well as long-time flyweight contender Jennifer Maia.

All of these matchups (plus more) are covered below and feature BLÜ’s predictions along with the Bet99 Sportsbook Odds.

Here we’ve got our standard UFC mismatch: A young, rising contender, Della Maddalen is against a struggling veteran, Danny Roberts whose career is near the end. Jack is still a developing 26 year old, but has already grabbed 1st Round finishes in both of his UFC fights. His last was a body-shot TKO over Emeev who, just before that, lost a tight split decision to Danny Roberts. With that in mind, as well as multiple 1st Round KO losses for Roberts, it’d be shocking if Roberts were to make it to the final bell here.

Salikhov was 18-2 headed into his last fight against Li Jingliang, but Li ended up using his speed and power, ended up grabbing a beautiful finish just before the end of the 2nd Round. Fialho is still young in his UFC career, sitting at 2-2 here, still somehow in his rookie year. What he’s shown in that time though is some of the slickest, most explosive boxing in the division. He was doing well early in his last fight, but Matthews shocked everyone with some of the crispest combos I’ve seen all year, finishing Fialho.

Fialho may have been finished in his last, but Salikhov simply doesn’t have the power, especially at his age, to finish a tank like Fialho. Thanks to Fialho’s incredible striking ability, pace and durability, I anticipate another spectacular, highlight reel finish for him in his rookie year.

If Sherman were to be fighting pretty much anyone else in the division, I’d be running towards his opponent, but Cortes-Acosta is a risky, risky pick in this situation. Sherman has been absolutely abysmal against grapplers, but lasts a lot longer against strikers like Waldo.

What should have been a slam-dunk win for Waldo in his last fight, Vanderaa hung in there for all 3 rounds, actually starting to steal the momentum as the fight went on. Sherman struggled with Vanderaa’s grappling, but eventually finished him in the 3rd Round.

This matchup could easily head in either direction, but there’s one glaring fact that is staring us in the face. Waldo literally just fought 3 weeks ago and took quite the beating to his legs. With the leg kicks and pace of Sherman, I’d be surprised if Waldo can keep enough output going to beat Sherman on the cards. Waldo is certainly capable of getting a finish, but Sherman hasn’t been finished by strikes since 2018 against Augusto Sakai. With that in mind, the most likely outcome appears to be a Sherman decision thanks to his frantic pace and wealth of MMA and boxing experience.

On paper, this seems like it could be Ion’s last chance in the UFC. He’s been on the wrong side of a 1st Round finish in 4 of his last 6 fights. Nzechukwu isn’t known for being the most exciting fighter, but he’s been developing his game recently and has always been a MASSIVE physical presence, usually dwarfing his opponents in size. Thanks to that ridiculous size and reach, plus his newfound grappling skills, Kennedy should be able to grab a finish or shut down Ion’s output to win the decision.

One thing for certain here is… we’re definitely going to be seeing a finish in this fight. In his 25-fight career in the UFC, Lewis has been in no more than FOUR decisions, none of which were 5 rounds.

The question is: who will earn the finish? Lewis has had a rocky road with 3 KO losses in his last 4 fights, but we have to keep in mind that two of those were Ciryl Gane and Tai Tuivasa. The last was Pavlovich who, in the opinion of many, was gifted a VERY early stoppage wherein Lewis didn’t even look dazed and had barely been hit. Spivak, although he’s very talented, does not possess the power to finish off Lewis. He may bank a round or two thanks to some takedowns, but if Lewis lands heavy even once, the fight is over.

He may have lost a tough one in his debut, but the UFC seems to be making it up to Turcios with a pretty favourable matchup here. Turcios is the kind of fighter that is in non-stop motion and will relentlessly walk you down. He’s also a ridiculously durable fighter. Natividad has had the exact opposite approach, not really ever getting a whole lot of offence going in the UFC and getting knocked out in both of his fights here. With this gift of a matchup, Turcios should be able to grab his first UFC finish.

If you looked at their recent results, you’d probably be picking Moroz on a 3-fight win-streak. When you look closer though, that 3-fight streak started in 2019. Her level of competition. also hasn’t really been all that high. In contrast, Maia has struggled with a 1-3 record in her last 4 fights… but they were to 3 of the top 4 women in the division: Fiorot, Chookagian and Shevchenko. Being that they’re close to the same age, I’d have to give a clear edge to Maia considering her recent opponents.

This is one of my favourite matchups of the night. Johnson was thrown at Mokaev in his debut which is a rough way to start. That being said, he showed some pretty impressive takedown defence against Mokaev’s unstoppable grappling ability. Other than that though, there wasn’t anything all that special. Zhumagulov has had a similar problem. He’s shown some unbelievable skill against top contenders like Manel Kape and Amir Albazi, but the results never seem to go his way. He doesn’t have the wins to back it up, but I truly believe that Zhalgas will FINALLY be able to grab a nice win here; he’s simply too skilled and well-rounded for Johnson.

Here I highlight some betting lines that you might want to take advantage of for UFC Vegas 65. These are odds that favour the bettor. Although some of them may conflict with my picks, they offer a fair reward for a slight bit of risk.

The Underdog Jennifer Maia at +175

Women’s fights are notorious for underdog wins as it is, but, in this case, the underdog has just fought 3 of the top 4 fighters in the division. Not only that, her opponent hasn’t been all that active and hasn’t been fighting that same calibre of competition. With those fairly significant factors, putting some money on Maia is worth the risk.

The Underdog Chase Sherman at +175

Normally I wouldn’t be putting any money on Sherman at all. In this specific case, I had to put that aside and look at some pretty significant factors that seem to be getting looked over by others. Cortes-Acosta just fought 3 weeks ago and didn’t really look all that impressive against Vanderaa… possibly the worst heavyweight. Not only that, Vanderaa did some NASTY damage to his legs and his cardio was waining near the end of the fight. With only 3 weeks since that last battle, I simply don’t think he’s recovered and learned from his mistakes to beat a veteran like Chase Sherman.

The Underdog Derrick Lewis at +162

If you look at their recent results, you can see why the betting line is skewed away from Lewis. That being said, we have to think about what happened in his fights. He lost to Gane because… Gane is essentially the champ; he’s just too good. He was beating Tuivasa and almost knocked him out, but Tai somehow pushed through and landed a clean elbow to knock Lewis out cold. For his last bout, he was simply never given a shot by the ref. Spivak is good, but he doesn’t have the power or durability to hang with the KO King of the heavyweight division. With no real path to a finish for Spivak, it seems more than likely that Lewis will grab yet another knockout to add to his total.