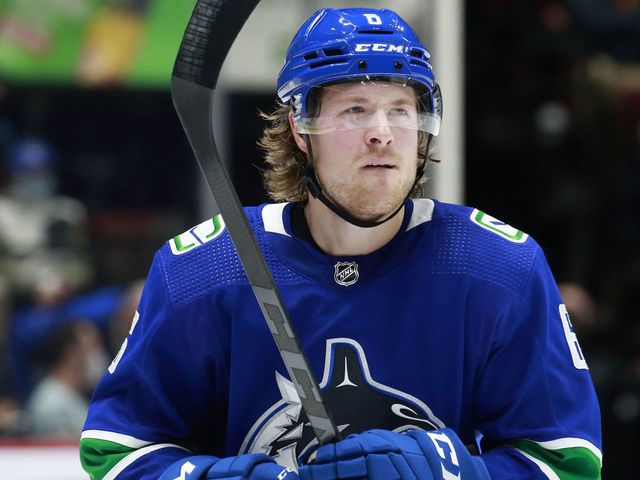 It hasn’t been the start Brock Boeser or anyone in the Vancouver Canucks organization wanted. The goal was the playoffs and at 5-9-3 with over a week until American Thanksgiving, playoffs look unlikely.

For Boeser, this was supposed to be a bounce-back season. Last season wasn’t a good one for him by his standards and was willing to prove a lot of people wrong. The Canucks re-signed the Burnsville Minnesota native to a three-year deal worth 6.65 million dollars per season this past summer. It was a “prove it” deal for Boeser and he was determined to get back to his best. That includes scoring goals.

Unfortunately, Boeser hasn’t scored any goals this season. But he has nine assists in 11 games which isn’t bad at all. He is trying to make things happen out there but he isn’t shooting the puck as much and when he does, the shot doesn’t look threatening. However, he is on a five-game assist streak which is a good sign

There was also a hand injury in the preseason but Boeser returned just before the regular season began. But the scar on his hand opened up and he had to miss games because of it. Injuries have been a big part of Boeser’s career and it seems like he can’t catch a break.

Analytics wiz JFresh put out a chart on expected goals and against for Canucks forwards this season. It did give a good look for Boeser. His expected goals vs goals against numbers are not only the worst on the Canucks, (among forwards) it looks like he is the worst in the league in that category.

There are a lot of reasons why Boeser’s numbers are terrible. For starters, he isn’t scoring. The second is linemates. He has spent a lot of time with JT Miller who was been his centre. Now we all know where I stand with Miller at centre: He isn’t one and his defensive game is very bad when he is in that position and that partially explains Boeser’s large expected goals against.

Boeser’s other linemates this season included Tanner Pearson and Ilya Mikheyev. Pearson has been an offensive black hole while Mikheyev has been all right but works better with Elias Pettersson.

Let’s look at some other numbers for Boeser courtesy of NaturalStatTrick. In terms of Corsi For, he is 277th (out of 368) among NHL forwards who have played 100 minutes or more at 38.79%. Boeser is also 339th in High Danger Corsi For with 36.84%. Yeah. those numbers aren’t good either.

As mentioned, Boeser is trying out there on the ice but he also seems to be mishandling the puck a lot and not winning the board battles.

Perhaps injuries are a reason why Boeser isn’t at his best right now.

With his cap hit, this isn’t ideal. With Canucks trade rumours heating up for the last few days, Boeser’s name has come up.

TSN insider Darren Dreger went on the Sekeres and Price show yesterday and talked about Boeser. What he said isn’t too surprising.

Why is that not surprising? It is because Boeser has no value right now.

If the Canucks are shopping him, they aren’t going to get the offer they want. Who is going to want a player with the worst expected goals and expected goals against combo in the NHL? Boeser’s reputation is a goal scorer and he has scored none.

Sure a fresh start is what he probably needs but he likely won’t be going anywhere soon.

However, we have seen Boeser turn things around in the past. When he is cold, he is freezing cold. When he is hot, he is scorching hot. If Boeser can get back to his old self, then teams could call with enticing trade offers.

If there is a mass exodus of players sooner or later, (they do need to blow it up) Boeser is likely going to be one of the guys that get sacrificed. He is a very likable person and has gone through so many hardships off the ice but maybe it is for the best.

But Boeser is still a Canuck and probably has to be for a little while longer. Trading him now would be selling low and if they do want to trade him, they need to wait to sell high.