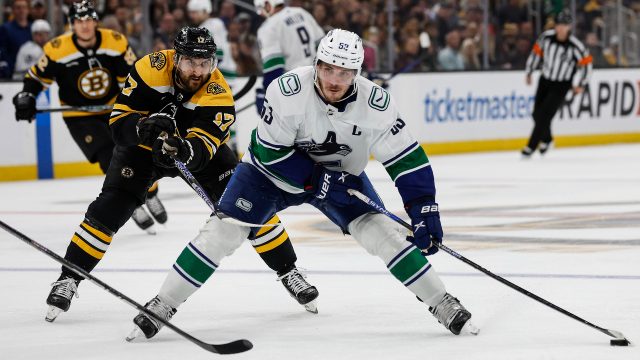 The Vancouver Canucks continue to be a bad hockey team.

Heading into the season, there were worries for sure, but from myself and many other fans and media members, there was also some optimism that the Canucks could reach the postseason. Nobody expected it to be this bad.

At the time of this writing, the Canucks are 4-9-3 after 16 games. They sit third last in the league and are on pace for 56 points which would be their lowest point total in a full season (not counting lockout and COVID seasons) since 1998-99 when they got 58 points. In fact, 56 points would tie them with their first year in the NHL for second worst season point total in team history. 1972-73 was worse as they got only 53 points that year.

Last season’s start was bad as they went 8-15-2 before firing Jim Benning and Travis Green and bringing in Bruce Boudreau. After 16 games, they were 5-9-2. So yeah, this year is worse.

The worst part is the fact that the Canucks have given up three or more goals in 15 of the 16 games they have played. Yikes. The only game they didn’t was the 5-1 win over the Pittsburgh Penguins at Rogers Arena on October 28. All the other wins saw the Canucks hang on for dear life or outscore their problems.

The losses? Well, they have either started very poorly in them or blown a lead. The Canucks have been very painful to watch.

There is no passion, there is no aggression and there is no mindset in this hockey team. The team has no identity. The Canucks are a car with missing tires, a bad paint job, a broken windshield and an almost empty fuel tank trying to get up a hill. Of course, a car driving up a hill like that is destined to come crashing back down and that is what we are seeing from the Canucks.

Canucks fans have no hope anymore. Why should they? Apathy is at an all-time high. Years of trying to take shortcuts have made the path to Stanley Cup contention longer. To put it in the words of Muse, the Canucks are f**king f***ed.

What can the organization do to bring the fans hope? No, it is not firing the coach, healthy scratching a veteran or making another trade for a bottom six player or bottom pairing defenceman. That is doing the one thing the previous management group refused to do: rebuild.

The word “rebuild” has been avoided in Vancouver for too long. You could say the Canucks should have started rebuilding when Rutherford and Allvin were hired, or better yet five, six or even nine years ago.

Of course, there are reports that Canucks owner Francesco Aquilini opposes a rebuild and wants to move things quickly for the Canucks to be a playoff team every year. That explains the “re-tool on the fly approach” Benning tried. Rutherford even echoed the words “on the fly” on After Hours after the home opener against the Buffalo Sabres.

But Canucks fans want a rebuild. Jamie Dodd on Sportsnet 650 a couple of weeks ago mentioned that Montreal Canadiens fans are enjoying life during a rebuild and said that if people in Montreal can stomach a rebuild, Canucks fans can too right?

Canucks fans have suffered a lot over the past decade and are starving for a Stanley Cup. Commitment to a rebuild would mean there is a plan in place to turn the team into a contender. A rebuild would bring hope to the fanbase.

The opening line of Radiohead’s song Ful Stop sums up Canucks fans’ feelings towards Aquilini and the organization:

You really messed up everything

You really messed up everything

If you could take it all back again

Strike up the tinderbox

Why should I be good if you’re not?

This is a foul-tasting medicine

To be trapped in your full stop

Now, what could a rebuild look like? Do they go scorched Earth and trade everyone including Elias Pettersson, Quinn Hughes and Thatcher Demko? If so, that would mean they are waving the white flag for the next five years at least. All three could get a lot of value as it is tempting.

The idea of starting fresh is also appealing considering the 2023 draft class is stacked with talent and is led by North Vancouver’s Connor Bedard.

A rebuild would mean trading away many players. (Bo Horvat comes to mind since his value is at its highest right now) Some will be harder to trade than others but the team needs cap space and the prospect cupboards to be full again.

Yes, rebuilds are painful and take a long time. But to quote The Mandalorian: This is the way. This team is a mess. The only way things will get better is if management takes out the TNT.