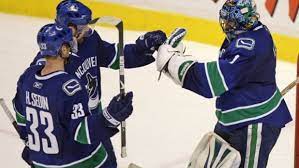 The Vancouver Canucks will have three alumni going into the Hockey Hall of Fame this year. They are Henrik and Daniel Sedin and Roberto Luongo.

They deserve it. All three of them are among the greatest to play in the NHL. The Sedins were something we’ll never see again. Twin brothers, on the same team, on the same line winning scoring titles. Luongo is fourth all-time in the NHL in wins with 489. He won 252 with the Canucks and is the franchise’s all-time wins leader.

These three were massive parts of the greatest era of Canucks hockey. Those were good times. The team was fun and created a huge buzz around the city. My young and naive self thought the Sedins and Luongo were going to take the Canucks to the promised land.

The Sedins took time to become elite NHLers. Imagine if Twitter was around in the early 2000s, the Tweets about them would have been brutal. But they slowly got better and at their peak, were two unstoppable forces.

When many Canucks fans think of the Sedins, they think of “The Shift.” This was just mesmerizing and their cycle game hypnotized defenders for years to come. But “The Shift” was pure magic.

For me, my favourite Sedin memory will always be Henrik’s no-look pass and Daniel’s between-the-legs goal in 2010. This was the final game of the regular season and Henrik was on the cusp of winning the Art Ross. With Daniel a goal away from a hat trick, it looked like the twins wanted to have some fun.

There are so many Sedin memories we could talk about and a whole article could be made on them. For instance, their first NHL goals, Henrik passing the puck through Antti Niemi’s legs in game 4 of the 2011 Western Conference Final against the San Jose Sharks, to their magical final home game against the Arizona Coyotes.

If Luongo did not make that save, Canucks history will look even sadder. It’s sad already but I don’t even want to think of the alternate universe where Sharp scored here.

My personal favourite will always be this out-of-this-world save against Ryan Smyth in the 2010 first round against the Los Angeles Kings. This to me, is also Hughson’s “Great Save Luongo!” call.

While these players gave us so many memories on the ice, there were so many off-the-ice moments that were memorable too.

The Sedins for instance were great ambassadors to their community off the ice. That included donating 1.5 million dollars to BC Children’s Hospital’s new building in 2010. The twins and their wives started the Sedin Foundation which supports children’s health and education. That goes to show how much class they have even off the ice.

As for Luongo, he went through the pressures of the market with his sense of humour.

Who could forget him saying “my contract sucks?”

We can’t forget Luongo needing to go to the bathroom during the 2007 playoffs and of course, his Twitter account.

To this day, his Tweets are still so funny.

The Sedins and Luongo were great players on the ice but better people off it. They gave Canucks fans amazing memories but sadly there is one memory that never happened: A Stanley Cup. 2011 still hurts…

But all three of them deserve their place in the Hockey Hall of Fame and Canucks fans should be nothing but proud.