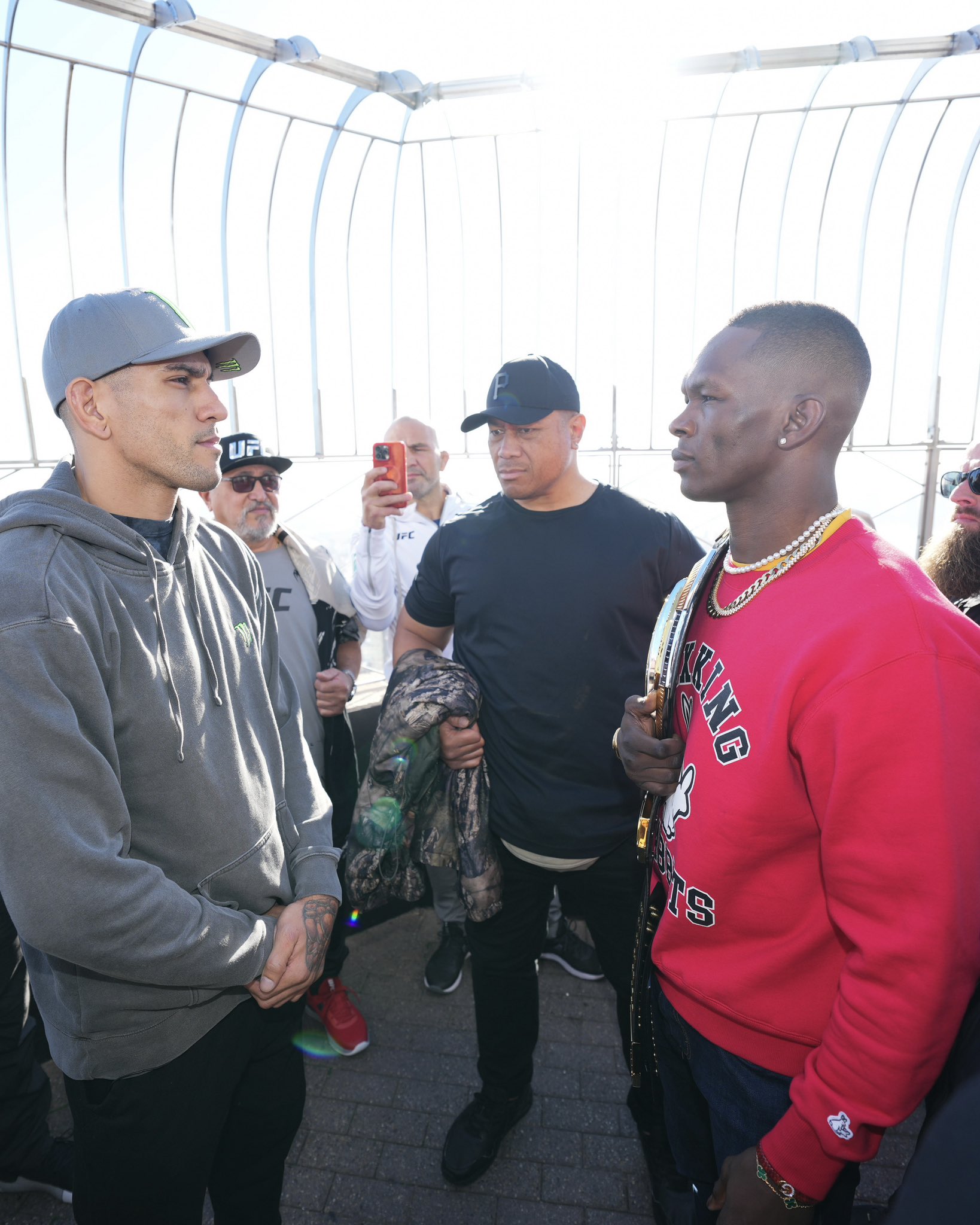 Back at MSG for the PPV, UFC 281 features two titles and one of the most exiting lightweight matchups of the year. We’ll finally see Israel Adesanya try and get his revenge against Alex Pereira for beating him twice in kickboxing.

Just before that, Zhang Weili will try to regain her belt from the current champ, Carla Esparza. Right before the title fights, Dustin Poirier and Michael Chandler will settle their differences in an all-out brawl. The rest of the card is stacked with UFC veterans and fan-favourites like Frankie Edgar, Dan Hooker, Dominick Reyes and ‘Meatball’ Molly McCann. All of these matchups (plus more) are covered below and feature BLÜ’s predictions along with the Bet99 Sportsbook Odds, the official betting sponsor of the Area 51 Sports Network.

It’s no secret that Dan Hooker has been struggling recently. He went from being one of the top contenders, beating Felder and having a close, all-out brawl with Poirier, to now on a BRUTAL skid with not one, but THREE 1st Round losses in 4 fights. Puelles hasn’t been fighting the same calibre of competition. Instead, he was impressing UFC audiences with 5 straight wins and an unusual collection of three kneebar submission wins.

We have to keep in mind that Hooker was thrown to the wolves with his losses to Islam, Chandler and Allen. Puelles simply isn’t on THAT level. With that, it’d be surprising to see Hooker get quickly finished by Puelles. Hooker was able to defend the grappling of Haqparast to win the decision. In this case, Puelles just seems like a much more talented, dangerous version of that. Hooker should be able to defend well early, but, as the fight goes longer, the grappling of Puelles should give him the win on the cards.

Much to the dismay of long-time UFC fans, Edgar has been trending downwards and has found himself on the receiving end of two of the most BRUTAL KOs in UFC history. While Gutierrez isn’t on the same level as ‘Chito’ Vera and Sandhagen, Gutierrez is also a young, elite striker who uses a lot of kicks. I hate to say it, but it seems like the UFC is setting up another KO loss for Edgar, likely ending his UFC career.

Other than the main event, this is the matchup that brought the fans and has all of them wondering what’s going to happen. This is going to be a case of who wants it more, who can take the most damage, survive and come out on top. Poirier, of course beat Conor McGregor twice in a row in 2021, then followed it up with a loss to Oliveira for the belt. On the other side, Chandler has had an equally thrilling journey recently, losing his title shot to Oliveira, having an all-out brawl with Gaethje and knocking out Tony Ferguson.

Given their history, I fully expect this fight to be an all-out brawl as well, just like Poirier/Hooker and Chandler/Gaethje. The question is, who will be able to come out on top. If we make it to a decision, I think Poirier is the clear choice; he’s proven to be better at winning that style of fight. BUT, I actually think Chandler can get a finish here. Chandler has already put Hooker and Ferguson to sleep, fully unconscious. He also wobbled Gaethje pretty bad and almost knocked out Oliveira to grab the belt. The power and the technique is there, he just needs to land a few good ones. Also, let’s not forget how good Chandler’s wrestling is too.

We can argue all day about what happened in Esparza’s last fight, leading to her title win, but she’s got a real fight on her hands now. I’m not trying to be disrespectful to the champ, but Weili is an absolute animal and should win this fight QUICK. We didn’t see a whole lot between Rose and Esparza, but, what we did see, was Rose landing a lot of her strikes (even though there weren’t a lot of them thrown). Weili could easily be the most dangerous finisher in the division with clear one-punch power and equally frightening grappling. Weili knocked Joanna out cold in the last one, I think she’ll do the exact same thing this weekend.

In all of combat sports history, there aren’t too many stories that are as intriguing as the one between these two men. If you’re still somehow unfamiliar with the history at this point, they were both kickboxing legends and Pereira managed to beat ‘Izzy’ twice. Of course, Adesanya then dominated his way to being one of the best MMA fighters in history, while Pereira has now skyrocketed his way into title contention.

We’ve seen this matchup twice in kickboxing, but this is MMA. That’s what makes all the difference in the world. We’ve seen Pereira’s power, but we’ve seen that he hasn’t really grown into an MMA style. It’s because of that simple fact, that you probably have to side with Adesanya. He’s got the MMA fight IQ and and the MMA skills to win this fight in a decision and avoid that knockout power.

I’m all in for supporting ‘Meatball’ McCann; she’s an entertaining and hilarious individual. Sadly, this is an absolute nightmare matchup for her. Blanchfield has looked absolutely unbeatable in the UFC using her grappling to shut down offence and dominate her opponents.

I’ve seen what McCann has to say about that kind of style and I agree with what she’s said. She’s said she’s a difficult person to hold down and submit. I’m not denying that… but when you’re constantly defending takedowns, you’re not getting offence going. I don’t know if Blanchfield can keep her down for a submission, but it’s going to be one hell of a rough 15 minutes for McCann if she can’t land her big strikes.

Reyes, much like Hooker, has had one of the hardest falls in the UFC recently. He went from being the outright number 1 contender, essentially beating Jon Jones for the title… to getting BRUTALLY knocked out twice in a row by Jiri and Jan. Spann has been an unpredictable fighter in the UFC, getting finished in the 1st Round by both Johnny Walker and Anthony Smith, but getting his own 1st Round finishes over Cutelaba and Cirkunov. Given Reyes’ recent troubles, I think the UFC is giving him an “easy” win here. They’ve given him a favourable matchup where he should be able to grab a 1st Round finish and get his career back on track.

Ironically, Riddell has found himself in a similar situation to his teammate, Dan Hooker. He was also considered one of the top contenders and was then finished twice in a row leading up to this weekend. Moicano wasn’t really one of those elite contenders until his last-minute fight against RDA in March. There we saw that he can grapple with one of the most famous grapplers in UFC history, as well as take some big shots.

Here I highlight some betting lines that you might want to take advantage of for UFC 281. These are odds that favour the bettor. Although some of them may conflict with my picks, they offer a fair reward for a slight bit of risk.

This may not be the most enticing line, being a women’s strawweight bout, but this is an unusual situation. Zhang is a finisher and she’s got 5 rounds to work with here. Esparza has been difficult for people to finish, but she also hasn’t faced someone like this since her KO loss to Tatiana Suarez in 2018. With all that power, pace and skill from Weili, it would truly be surprising for this fight to reach the final round.

Although we’ve seen Hooker get finished in 3 of his last 4 fights, they’ve all been by elite, title-contending finishers. Other than that, his fights tend to end in decisions. This was true for his matchup with Haqparast. Since Puelles is a VERY similar fighter to Haqparast, it seems more than likely we’ll see a decision.

The Underdog Michael Chandler at +175

As always, when these fights are dead-even, the smarter money is on the underdog. That aside, we’ve seen Chandler knock down, knock out or wobble every single one of his UFC opponents so far. I don’t think that trend will change in this fight. Unlike Gaethje though, I’m not fully convinced that Poirier can wear that damage and get out the other side. At this kind of price, it’s well worth the risk.