It’s time for the Canucks to free Jack Rathbone 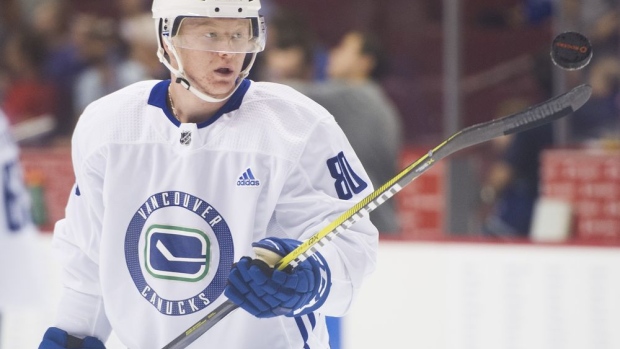 There isn’t a lot to enjoy for Vancouver Canucks fans right now.

Well, other than the fact Bo Horvat is scoring goals, Elias Pettersson is their best player and the draft lottery simulator picking the Canucks to win the first overall pick. Connor Bedard must also be rubbing his hands together at the thought of his hometown team drafting him.
But one guy who isn’t enjoying things right now is Jack Rathbone.

Rathbone has only played four games this season. The Canucks won two of them. Those are their only wins of the season. He sat in the press box for the other seven and the Canucks lost them all.

Now I am not saying Rathbone is the Canucks good luck charm or he is going to be their secret weapon like how Air Bud was for multiple sports teams. (Remember those movies?) But what do the Canucks have to lose by playing Rathbone? Nothing really.

The Canucks defence sucks. You know it, I know it, everyone and their mother knows it. But can Rathbone be worse than the rest of the defensive core not named Quinn Hughes, (though he hasn’t been that good to start the season) Luke Schenn and the newly acquired Ethan Bear?

One of Rathbone’s issues was his defensive game. That was a reason why he barely played in Vancouver last season and spent most of the season with the Abbotsford Canucks.
But this season, he hasn’t looked too bad defensively. Rathbone is also good at making passes and transitioning up the ice.

That is something the Canucks have been awful at. One player who has been bad at the breakouts is Oliver Ekman-Larsson. It is like the puck is a grenade on his stick when he has it and it seems like every pass he makes is a turnover.

Rathbone seems like the only player other than Hughes and Bear that can transition the puck up the ice. Why not give him a run of games and see what he’s made of? Has his defensive game really improved? There is only one way to find out.

Rathbone has potential and upside and he’s not going to develop properly by sitting in the press box. The only people that can grow and develop in the press box are up-and-coming sports writers like myself and Nathan Durec.

Since head coach Bruce Boudreau is not afraid to give veterans a healthy scratch, perhaps he does that to one of the defencemen as well. The obvious candidate is OEL. He could possibly make way for Rathbone. Having two defencemen that are good at transitioning the puck up the ice on the left side does make the Canucks defence a bit better.

Pair him with Tyler Myers, Luke Schenn or heck even Ethan Bear. (Having two puck-moving defencemen on the same pairing isn’t a bad thing plus Bear is decent defensively but that potential pairing is a risk.) Let Rathbone display his smooth skating, and puck-moving and let him display what he can do defensively.

Rathbone is not game-changing but he would help the Canucks defence right now and give fans to cheer about. It’s time to free Rathbone.