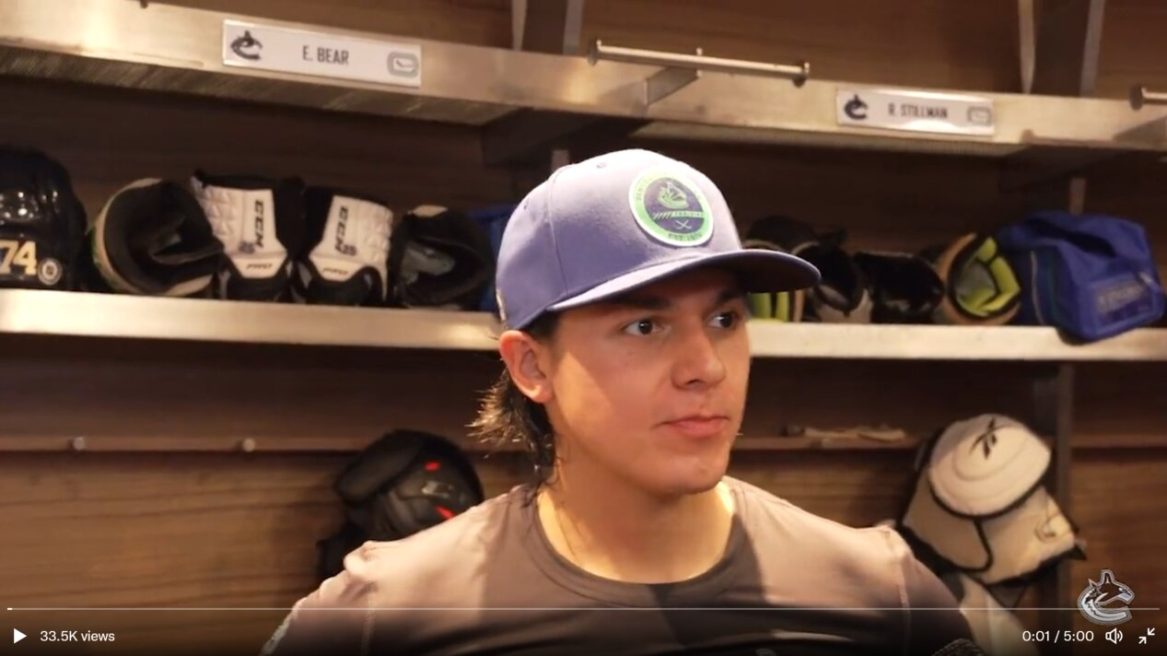 Ok, it is time for Avid Thoughts which is being written and will likely be published on the eve of Halloween. The Vancouver Canucks were a horror movie seven games in. Actually, they have been for the most part of the last eight years.

However, things have sort of turned around. The Canucks got back-to-back wins on back-to-back nights against the Seattle Kraken and the Pittsburgh Penguins. The Canucks barely hung on in Seattle but played by far the best game of the year against Pittsburgh. For once, they also had an excellent third period!

Let’s discuss some Canucks stuff as well as other things happening in the world of sports on this day before Halloween.

The Canucks traded for Ethan Bear! I wanted him in the summer but better late than never I guess.

Vancouver only traded a fifth-round pick for Bear to Carolina. AHLer Lane Pederson was also packaged along with Bear and the Hurricanes retained $399,999 of Bear’s 2.2 million dollars contracts so the Canucks are only paying him 1.8 million.

It was a good trade by Patrik Allvin and company. Bear is a puck-moving defenceman that is reliable on the penalty kill and can block shots. With the Canucks breakouts being very poor, Bear is a welcomed addition. Plus, he can play the top four minutes.

He has not played a single game with the Hurricanes this season and has struggled to fit in with them. When Bear was with the Edmonton Oilers, he was reliable with them. The fact that he is right-handed is even better.

So yeah, I really like this acquisition by the Canucks. Bear makes the right side of the blue line better. Not elite per se, but better. Since Bear hasn’t played all season due to the Hurricanes healthy scratching him, he might take some time to adjust and get back into gear.

The Canucks take on the New Jersey Devils on Tuesday and Bear will make his Canuck debut. Also, I hope Bear gets his jersey spelt out in Cree Syllabics like when he was with the Oilers.

So the Arizona Coyotes had their home opener in their new arena this past weekend. The former Winnipeg Jets were taking on the current Winnipeg Jets. Winnipeg won 3-2 in overtime.

The Coyotes are playing in 5000 seat arena at Arizona State University in Tempe. AHL and junior hockey arenas have bigger capacities. The locker room for the Coyotes looks worse than a minor hockey team’s.

Here is the visitors’ locker room and it doesn’t look much better. So the Canucks will be using this when they visit Tempe.

If the Coyotes were a team in a different sport, they would have moved by now. However, Gary Bettman and the NHL want to keep them in Arizona despite the arena and financial turmoil. The best move for them would be to move to Houston or Quebec but nope, they are still in Arizona.

However, it looks like it was a great atmosphere at Mullett Arena. People got the Mullets out. The arena was named after one of the university’s benefactors by the way. It looked like a great night for students too.

We can make fun of the Coyotes arena situation all we want but it looks like Mullett Arena will give them a great atmosphere.

As you probably know, the Canadian Premier League is giving Vancouver an expansion team that will begin play in 2023. They will play at Willoughby Community Park in Langley.

It also looks like the name and logo of the team has been unveiled this past week.

So what do I think? It’s OK I guess. I wouldn’t have gone with Vancouver FC for a team that plays in Langley. However, I understand why they did that. Langley is part of Metro Vancouver and other teams in the area have Vancouver in their name. Those are the WHL’s Vancouver Giants and the CEBL’s Vancouver Bandits.

Both of those teams play at the Langley Events Centre which is next to Willoughby Community Park. The Bandits were known as the Fraser Valley Bandits but rebranded to Vancouver Bandits a few months ago. I guess the new CPL club wants to connect to not only the people of Langley and the Fraser Valley but the whole Vancouver area. But I would have gone with Fraser Valley FC because it sounds so much cooler.

I expect big crowds for Vancouver FC to be big and the Vancouver Whitecaps will have competition in their own market. Now imagine these two meeting in the Canadian Championship next season. Also, is the logo supposed to be some kind of bird?

Back to the drawing board for Chelsea

The streak of unbeaten games under Graham Potter has come to an end for Chelsea. Potter lost his first game as Chelsea’s manager…against his former team Brighton and Hove Albion.

So Chelsea took Brighton’s manager, some of their coaching staff, and Marc Cucurella, who was their player of the season last year. But they got battered 4-1 by them. Laugh all you want rivals fans.

It was a nightmare of a return to AMEX Stadium for Potter. Right from the start of the game, Chelsea were bad. Brighton were going through the defenders and midfield like swiss cheese and the attack couldn’t convert except for a Kai Havertz header early in the second half. To make things worse, it was Brighton’s first win in five games and the first win for Roberto De Zerbi, Potter’s successor.

There also goes the undefeated streak when Trevoh Chalobah starts. To make things worse, he got an own goal as did Ruben Loftus-Cheek.

I think the back three and wingback experiment needs to end. (Just like with the Whitecaps!) Potter had Raheem Sterling and Christian Pulisic playing as a wingback and they are wingers. Let’s go to a back four and have Pulisic and Sterling play their natural positions.

It also doesn’t help that Chelsea has key injuries to N’golo Kante and Reece James. Both of them will miss the World Cup. But injuries can’t be excused.

Potter has an idea of what he wants Chelsea to be. Despite not having all the right personnel, we have shown glimpses of how exciting Chelsea can be in the last few weeks. The players also have to buy into Potter’s system.

Next up for Chelsea is Arsenal at Stamford Bridge. This to me is a must-win game. Arsenal are top of the Premier League and has only lost once this season. It’s going to be a very tough test and Arsenal have won their last two games at Stamford Bridge.

The Phillies in the World Series and Philadelphia sports success

The Philadelphia Phillies and Houston Astros are tied 1-1 in the World Series.

Literally, everyone who isn’t an Astros fan is cheering for the Phillies in the World Series. Well, maybe New York Mets and Pittsburgh Pirates fans are cheering for the Astros but Houston is the most hated team in baseball due to the cheating scandal.

The Phillies are a great story. They struggled early in the season and fired manager Joe Girardi on June 3rd. Bench coach Rob Thomson became their interim manager and they went 65-46 and clinched a wild-card berth on the third last day of the regular season against…the Astros.

Philadelphia beat the St. Louis Cardinals in the wild-card round, then the defending World Series champions Atlanta Braves in the NLDS and then knocked off the San Diego Padres in the NLDS. Now they are three wins away from winning it all.

My heart wants the Phillies to win the World Series but my head says the Astros.

Check back next week for more Avid Thoughts with yours truly!