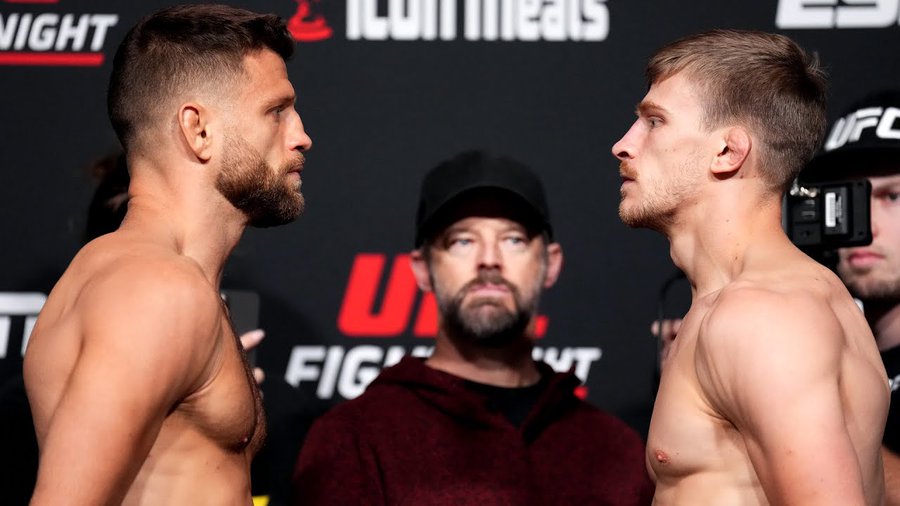 UFC Vegas returns with one of the more intriguing main events of the year. Two of the best strikers in the Featherweight division, Calvin Kattar and Arnold Allen, will face off in the main event, hoping to put themselves in a good spot for title contention.

We’ll also see UFC veterans Tim Means, Max Griffin and Andrei Arlovski return the Octagon. A few other men are looking to propel themselves up the rankings with big wins this weekend. Former Glory kickboxer, Dustin Jacoby, Phil Hawes, Roman Dolidze and Chase Hooper are all looking for that statement win to get the attention of the top 15. All of these matchups (plus more) are covered below and feature BLÜ’s predictions along with the Bet99 Sportsbook Odds.

Now that he seems to back at 100%, Jacoby is back for the third time this year, taking on another powerful striker. Rountree has had his ups and downs since joining the UFC. He’s one of those fighters that either gets a finish or gets finished. That’s led to wins in has last two over Karl Roberson and Modestas Bukauskas. Sadly, that’s also led to early 1st Round losses to Johnny Walker and Cutelaba.

Unfortunately for Rountree, Jacoby is one of those top prospects. He’s a former Glory kickboxer with elite, world championship level experience and is undefeated in the UFC. Given Jacoby’s championship striking pedigree and Rountree’s history of being finished, I’d be shocked if Jacoby didn’t grab an early knockout.

Anything could happen in this matchup. Gore looked as though he was going to be TUF 29 champion, but since joining the UFC, he hasn’t looked like the same fighter. He was dominated by actual TUF 29 champ, Bryan Battle, then was swiftly finished by Cody Brundage in his last bout.

On the other side, Fremd made his UFC debut last time out. Although he wasn’t finished by Anthony Hernandez, he was dominated by a grappling-heavy approach.

With no UFC success on either side, this almost entirely comes down to their styles and their physical attributes. We haven’t seen much of Fremd, but he seems to have an active and aggressive style. Gore has the power to end this fight at any moment, his problem has always been his activity. Fremd, just like Battle, will likely win on the cards by being the more active striker. Like I said though, it only takes one from Gore, so he’ll have to play this fight perfectly.

It’s been a while, but fans will finally be treated to a heavyweight slugfest! Cortes-Acosta recently came off the Contender Series and is looking to make his debut against the struggling Vanderaa. Vanderaa has now lost 4 of his last 5 fights, capping it off with a loss to none other than Chase Sherman in his last fight. Now, I’m not trying to put Sherman down… but he’s not exactly a UFC level fighter. The fact that Vanderaa was winning that fight and somehow still got finished in the third, tells me this fight won’t be close. With Waldo’s quick, precise and HEAVY strikes, I don’t think Vanderaa will be able to survive all 3 rounds.

Much like the main event, these two are very evenly matched and a decision could go in either direction. They’re both near the end of their careers with a similar reach; the only thing separating them are their recent performances. Means just fought Kevin Holland and he did pretty well nullifying a VERY dangerous, long striker. Before that he had won 3 in a row, including Nicolas Dalby who looked to be a promising, young contender.

Griffin also has 3 wins sandwiched between a loss. He lost three split decisions to Magny and Alex Oliveira. Griffin has a history of losing close decisions, losing no less than THREE split decisions in the UFC alone. It’s a weird pattern, but it seems likely that it will continue. While Griffin’s style is faster, Means has a history of shutting that down and playing into his own game. That makes for a close fight. I’d just say that Means’ style is going to win over the course of 3 rounds, grabbing a nail-biter of a close decision.

This is one of the more intriguing and exciting main events we’ve had in the Vegas events recently. Both men tend to work almost exclusively on the feet, enjoying a good brawl. I don’t see any indication of this going any other direction, so it really comes down to who’s the better MMA striker. Kattar was, of course, famously dismantled by Holloway last year. Since then he’s seemed to improve quite a bit which included him dominating Giga Chikadze in January. Sadly, he lost his last one to Emmett in a somewhat strange split decision.

Allen hasn’t had the same problems in his career, sitting at 18-1 with a 9-0 UFC record. Most notably, his last two wins were Sodiq Yusuff and Dan Hooker.

First off, I’d be surprised if this fight didn’t reach a decision. Kattar has proven to have next-level toughness, plus, neither has grabbed a finish over an elite featherweight. Allen reminds me of Giga, but more versatile and strong. Kattar is a VERY good boxer and Allen is going to be challenged, but Allen’s style may be what saves him on the cards.

This is a tough one to judge, but it sure looks like an exciting fight. Dolidze started off his UFC journey slow, barely beating John Allan and losing to Trevin Giles. In his last fight though, he caught a surprise 1st Round KO over Kyle Daukaus. Phil Hawes had a rocky spot, getting finished by Chris Curtis, but is nonetheless a very dangerous contender. He too has a win over Daukaus, but also has wins over Imavov, Malkoun and Deron Winn.

Neither of these men have proven all that reliable. That being said, Hawes seems to have the more impressive performances. He’s had a problem with fight IQ in the past, but he’s got a pretty incredible skillset. With the wider range of skills, it seems likely that Hawes will edge ahead in a decision.

Back for yet another fight, Arlovski is now riding a 4-fight winstreak, sitting at 34-20 in his storied UFC career. His fights have been extremely close the past couple years, beating both Collier and Vanderaa in split decisions. De Lima had some recent success, beating Ben Rothwell and Maurice Greene, but then lost to Blagoy Ivanov in his last.

I’d be surprised if either of these men stepped foot in the Octagon after this. With that in mind, this is a tough matchup to pick, because they’ll both want it that much more before they retire. It’ll be razor-thin, possibly even another split decision. I have to go with the more experienced guy, the one who’s on a bigger winstreak and the one who’s a master of decisions: Andrei Arlovski.

Here I highlight some betting lines that you might want to take advantage of for UFC Vegas 63. These are odds that favour the bettor. Although some of them may conflict with my picks, they offer a fair reward for a slight bit of risk.

Jacoby is one of the best kickboxers on the planet. He’s got multiple 1st Round UFC wins while Rountree has multiple 1st Round losses. Since this fight will likely take place mostly on the feet, another 1st Round finish could be right around the corner.

The Underdog Andrei Arlovski at +190

At this point in his career, there aren’t too many favourable matchups left in the UFC. I’d say this is his chance to grab one last UFC win before riding off into retirement. His style favours long, 3 round decisions and that’s what de Lima has been stuck in on multiple occasions. He’s grabbed 4 wins in a row over much heavier opponents, there’s no reason to believe he can’t get one final decision win.

The Underdog Tim Means at +154

At best, I’d say this fight is 50/50. Based on that alone, there’s way more value on this side. That aside, Griffin has been struggling in decisions. He’s got a bad habit of losing in split decisions, while Means has been winning all of his recent fights by submission. He was also doing pretty well against Kevin Holland for the 1st Round in his last fight.