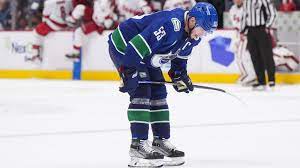 The Vancouver Canucks are bad and I haven’t done an Avid Thoughts column in a few weeks. Why? I’ve been busy and stuff.

So this won’t be another “Canucks are bad and I’m tired” article as we will talk about more positive things in sports below. So let’s get the elephant in the room out of the way first.

The Canucks are a tire fire. What’s next?

Another day, another loss for the Canucks. This time it was a 3-2 defeat to the Carolina Hurricanes.

It was another bad showing in the third period, except they did make it close late. (With some luck as JT Miller’s goal went off Jesperi Kotkaniemi’s face.) I don’t know what it is with this team. They just come out for the third period and look like zombies. It was hard to watch as they had trouble getting the puck. When they did, the Canucks couldn’t string a pass right.

Yes, the effort was better but that didn’t mean they had a good game. The bar is so low nowadays that it is sitting at the Earth’s core. Shot attempts were 69 (nice) to 38 in favour of the Hurricanes. Man, Sebastian Aho and Andrei Svechnikov are good players.

For the Canucks, where do they go from here? No trade or coaching change will make things better. By the way, it looks like Bruce Boudreau’s coaching days are numbered. It’s hard not to feel for the guy, he’s a good coach and a very likable person. However, if someone takes the fall for the Canucks’ disastrous start, it is going to be him. That’s just how things work.

I already wrote about Francesco Aquilini and how this team should rebuild and build around Elias Pettersson, Quinn Hughes and Thatcher Demko. Last summer was a great opportunity to do so and we probably would not have been talking about an 0-4-2 start.

So when is the breaking point for the Canucks? When they go, 0-10? The breaking point should have been years ago. Trevor Linden saw it and wanted to rebuild but he was pushed out or “amicably parted ways” with the club. It’s been almost nine years of hell for this franchise and the fans are fed up.

There has to be tension in the organization right now. What makes things poetic is that Rogers Arena’s roof is leaking.

I really don’t know what the Canucks can do other than start a rebuild and trade everyone not named Pettersson, Hughes, Demko and I guess Vasily Podkolzin. I already got the draft lottery simulator out! Could you imagine if the Canucks draft North Vancouver boy and generational talent Connor Bedard? That would be an amazing story.

But let’s face it, the Canucks have terrible luck when it comes to the Draft Lottery. But it looks like 2023 is a good draft. Adam Fantilli and Brayden Yager seem to be very good prospects as well.

Speaking of fans, fans can cheer for the team in any way they want. If you want to be a cheerleader and accept the team for what they are, that’s fine. If you want to throw your jersey on the ice because you are not happy with the losing, that is also fine. I’m sick of other people telling people how to be a fan. Enough of this, “real fans…” stuff, be a fan however you want.

Caleb (@StuffCalebSaid) has bizarre takes but he can be a fan however he wants. Though he probably should focus on getting shelves stocked at Save On Foods, he and every other fanbase have every right to have blind optimism.

But don’t you want to see a winning team? I sure do.

The BC Lions will host a playoff game

Speaking of winning teams, Vancouver has one. They are the BC Lions. No, I don’t want to hear from the CFL haters right now.

The Lions will be in the playoffs for the first time since 2018 and will play a playoff game at BC Place for the first time since 2016. They have been a fun team all season. From Nathan Rourke’s great passes, the amazing catches from Bryan Burnham and Lucky Whitehead (and his famous stadium entrances) and the defence coming up big when it needs to.

However, the Lions went through their fair share of adversity this season. Rourke has been out since August with a foot injury while Burnham and Whitehead are dealing with wrist and foot injuries respectively.

But the Lions have done well. Vernon Adams came in from the Montreal Alouettes. He needed time to settle in but has done a good job.

The Lions won their last two games over the Winnipeg Blue Bombers at home and sealed a home playoff date with a win over the Edmonton Elks last week. The Elks have lost 17 straight at home which is insane. No wonder the stands at Commonwealth Stadium look so empty.

So the Calgary Stampeders will be the playoff opponent on November 6. These teams last met in the Western Final in 2016 as Calgary won 42-15. The Stampeders went on to lose the Grey Cup to the Ottawa Redblacks. BC and Calgary last met in a playoff game at BC Place in the 2012 West Final as the Stamps beat the Leos 34-29.

This is great for Vancouver sports. The last time a Vancouver team hosted a playoff game was in October 2017 when the Vancouver Whitecaps drew 0-0 to the Seattle Sounders in the first leg of the Western Conference Semi-Final. They would fall to the Sounders in the second leg. It has been five long years.

The Canucks have not played a playoff game at Rogers Arena since 2015. That is bizarre to think about.

Let’s rally behind the Lions. I don’t think they’ll win the Grey Cup as the Blue Bombers seem to be the favourites to three-peat. However, I wouldn’t count them out.

Rourke will start the final game of the regular season against Winnipeg and looks likely to start in the playoffs. It also looks like Whitehead could play on Friday and Burnham will be back for the playoffs.

I’d love to be at the game on November 6. It’s been a long time since I’ve been to a Lions game. I also think there will be a lot of demand for tickets because one, it is a playoff game and two, the team looks good. Who knows? We could see the upper bowl open.

Canadian striker Jonathan David is having an excellent season with Lille in Ligue 1. In 12 games, he has nine goals and three assists. That’s pretty good.

David is also tied for second for goals in Ligue 1 with Neymar of Paris Saint-Germain. That’s pretty good as well.

I really thought David would leave Lille last summer as it looked like he was a hot commodity on the transfer market. A move did not happen but David is still a hot commodity.

He is wanted by pretty much every big club across Europe and that includes a certain team that wears blue from London that I so happen to be fond of: Chelsea FC.

David was reportedly a Chelsea target for the past year or so and it is no surprise they want him. He’s an up-and-coming striker and a player who wants to take that next step.

David is a striker that is great on both feet. He has got some pace, knows how to win aerial duels and one on ones and of course can score goals. David likes to run as quickly as possible to the box on the counterattacks and likes to hover near the six-yard box. However, he can score from outside the box as well.

Potter likes to tinker. We have seen a 4-3-2-1, a 4-2-2-2 and a 3-4-3. David fits into his system because he is a pacy striker that likes to move around in the box and is great at counterattacks. If David were at Chelsea, he would be running around trying to find space for an open ball and when he has it would make quick passes or take the shot himself.

What about Armando Broja? I think Chelsea will keep him around unless he disappoints for the rest of the season. Broja is a year younger than David. (David is 22 and Broja is 21) also has the higher ceiling. However, David can also play as a second striker and as an attacking midfielder. Having two quick strikers up front would really benefit Chelsea. It also seems Potter doesn’t see Pierre-Emerick Aubameyang as part of the long-term plans which makes sense as the 33-year-old is on a two-year contract.

Oh yeah, Christopher Nkunku is in talks to sign a pre-contract for Chelsea, (which means he could join next summer.) so having both David and Nkunku in the attack is stuff dreams are made out of,

At the same time, I’m not sure David is ready for the physicality of the Premier League. It is way more physical than Ligue 1. Also, Chelsea has a notorious reputation for ruining strikers and the fact that they could ruin David’s potential worries me as a Canadian.

There are many other teams after David including Premier League rivals Manchester United and Arsenal. David is valued at 45 million Euros and Chelsea would have to pay higher than that because of the likelihood of a bidding war.

But the pros outweigh the cons. David is a player that fits Potter’s system, has a lot of potential and would be a great long-term solution for the striker position.

However, it looks like David is just a target for now.

It looks like Potter is prioritizing getting Nkunku done as well as other targets such as Rafael Leao of AC Milan and Ivan Toney of Brentford. Those guys are higher on my shortlist than David.

As much as I think it might not work, I would love David to come to Chelsea. It is not just because I’m Canadian, it is because he is the type of player Chelsea really need. Do I think it’s happening? Probably not but things could change between now and the summer. (I don’t think he’ll move in January.)

Whether that is Chelsea or not, I do believe David is ready to take on a bigger challenge in his career. Up first, is the World Cup which is less than a month away.