The WHL Show: Rhett Melnyk and His Move to Edmonton 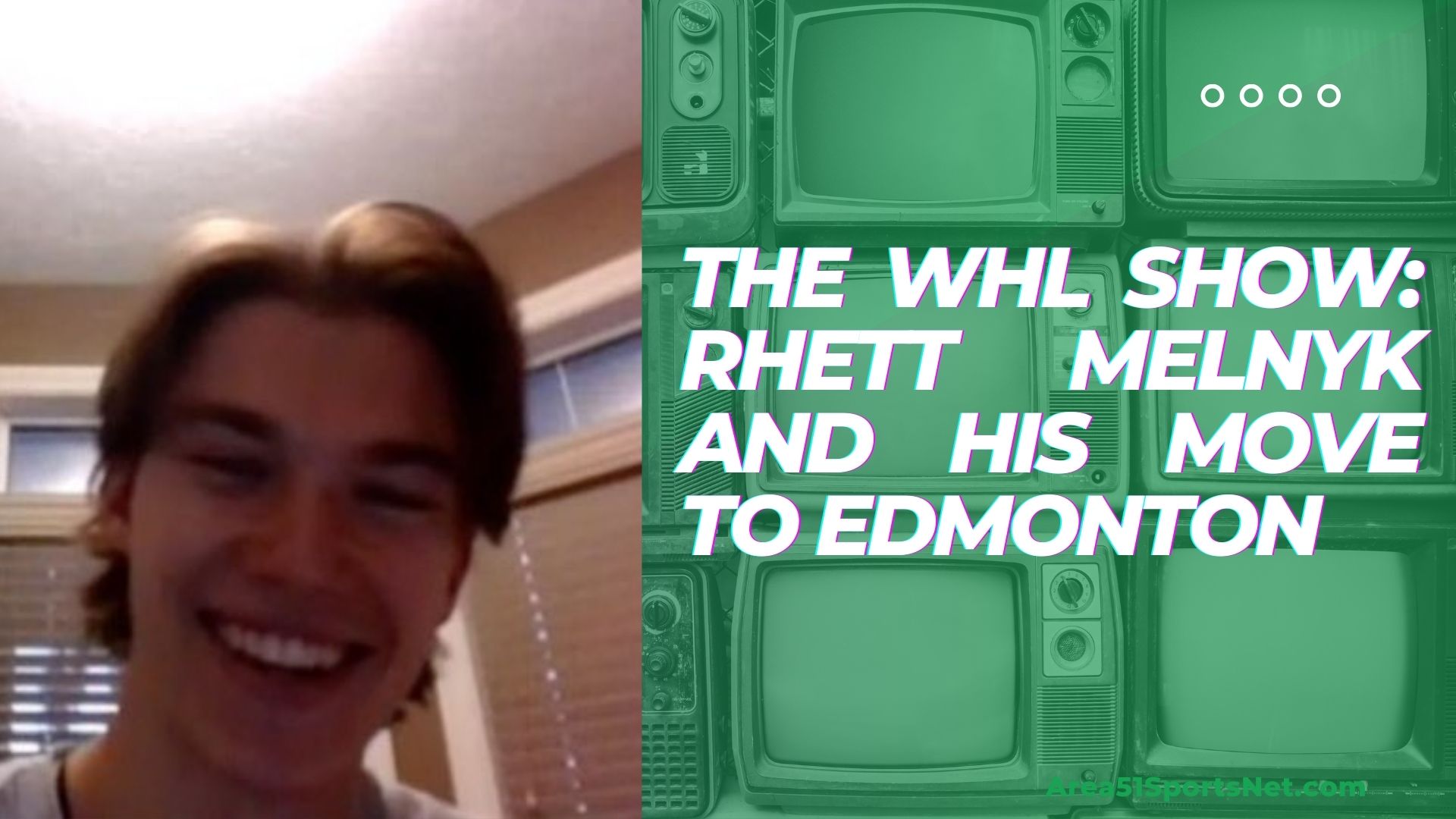 Edmonton Oil Kings forward Rhett Melnyk joined Gabriel Neumann on the fifth episode of The WHL Show. Below is the transcribed interview.

Rhett Melnyk, who wears #27 for the Oil Kings, has six points (3G-3A) in nine games played so far. He scored his first goal on September 24. This is Melnyk’s first year with Edmonton; he was drafted 33rd overall by the Tri-City Americans in the 2019 WHL Draft, and was traded to the Oil Kings in exchange for Jalen Luypen.

Gabriel Neumann: Welcome, Rhett! Thank you for coming on today, I really appreciate it. We’re gonna just jump straight in. What has your mindset been going into this 2022-23 season?

Rhett Melnyk: It’s kinda been a fresh start for me this year. I started with a new team here in Edmonton and it’s been really exciting so far and I’ve been having a lot of fun. Thankful to be here and it’s been awesome.

GN: How has the transition from Tri-City to Edmonton been?

RM: It’s been really good! It’s been awesome. The staff and all my teammates treat me awesome, so I couldn’t ask for more.

GN: Good to hear! What are some of the main differences you’ve noticed, going from Tri-City up to Edmonton?

RM: You know, growing up in Edmonton too, it’s just a hockey town. Great atmosphere here. It’s just a really cool place to play and a cool team to be a part of.

GN: Can you tell me a bit about Edmonton’s rebuild going into this season? What are you guys working on?

RM: Yeah, there’s obviously a lot of new faces here and we just gotta stick to it, trust in each other, trust in the systems kinda thing. There’s obviously always things you gotta work out but it’s really early in the season and I think we have lots of time to figure it out.

GN: Yeah! What are some strengths of your team that you want to highlight?

RM: I think we’re… we work really hard and we’re always trying to make the right plays. Our forecheck is pretty good once we get it behind the defencemen and get it in their zone. I think we strive to do the little things right and I think that if the effort’s there then all the rest will come.

RM: Main thing would be probably to just enjoy it, you know? It’s… you’re playing a sport that you love. Just show up to the rink every day and put in the work. It’s an honor to play in this league and just always remember that.

GN: Of course! Can you describe your game for me?

RM: I’d say I’m a hardworking two-way forward and I’ll make the plays around the net, and when I get the opportunity I’ll put the puck in the net.

GN: Love it, easy! Who’s a teammate on the Oil Kings who you’d least want to play against?

RM: Teammate I’d least want to play against… oh, probably… I’m gonna say Carter Kowalyk. I’ve played against him before, growing up, so yeah, probably him.

GN: Now, who’s a player on an opposing team who you’d want to play on the same team with?

RM: Um… probably gonna say Jordan Gustafson on Seattle because we grew up playing together here and I feel like we have a lot of chemistry growing up, so. That’d be pretty cool to play together again.

GN: Absolutely. So looking back at the Oil Kings, which underrated teammate do you think fans should keep an eye on this year?

RM: I think I’m gonna go with John Szabo. He shows up to the rink every day and puts in the work. He’s a great guy and I think people will definitely have to keep an eye on him.

GN: Now, if the Oil Kings didn’t exist, which WHL team would you most want to play on? Excluding Tri-City.

RM: That I’d most want to play on?

GN: Who are your NHL idols?

RM: I really looked up to Jonathan Toews growing up and I also look up to Brock Boeser. I think he plays a full 200-foot game and he produces a lot, so I really look up to his play.

GN: Do you have any superstitions or rituals?

RM: Yeah, I actually tape my left shin pad always before my right. And in warm-ups, I always get off at exactly 45 seconds. So those are probably my two biggest ones.

GN: Okay! What does an average game day look like for you?

RM: It depends if we’re on the road or at home, but for at home, home games, we usually go to the rink in the morning and have our breakfast and do a stretch and then we get ready. Go back home, maybe have a nap and then come back to the rink.

GN: Yeah! Do you have a go-to pre-game meal?

RM: I usually like to stick with pasta. Fettucini alfredo or spaghetti with meat sauce.

GN: Good choices. Who on the team, going into meeting your new teammates and such, would you say has the best locker room music?

GN: What does he play?

RM: There’s a variety. He kinda switches it up, I don’t mind it.

GN: Who would you say has the worst music on the team?

RM: [laughs] The worst music… oh… sometimes, Shea Van Olm will play some questionable music. So, we’ll make sure to let him know but, yeah.

GN: Amazing. Who on the team has been the most welcoming so far?

RM: It’s hard to pinpoint one guy. I feel like there’s been a lot of people who have. Especially when I first got traded here, a lot of the guys reached out. I knew some guys before I came here as well, from the Edmonton area, so yeah! There isn’t one guy. Everybody’s been treating me awesome.

GN: That’s awesome to hear. If you weren’t playing hockey, what would you want to do with your life?

RM: I’d probably wanna stick with sports. I think being a baseball player would be pretty cool. Golf, probably, would be cool too, so.

GN: Gotcha! Did you play baseball growing up?

GN: What got you into hockey specifically?

RM: I’d say my family’s a pretty big hockey family. My dad played, so, that definitely wanted me to get into it. And I look up to him, obviously, so that’s probably the biggest reason.

GN: Cool! Now, right before this I interviewed your previous teammate, Tomáš [Suchánek], and I asked him to ask you a question and he gave me three. The first one, he said: How did it feel coming back home to Tri-City and losing 7-1?

RM: [laughs] Not very good! That was a tough blow there!

GN: [laughs] The second one was just how does it feel playing in Edmonton? ‘Cause he said he knows it’s your hometown and he knows you’d probably be happy there. He wants to know how it is.

GN: Awesome! And his last question was: How does it feel to have the ability to score in practices now, now that you’re not playing with him?

RM: [laughs] Yeah, I was kind of expecting one like that. Yeah, it’s awesome. [grins] It’s been good. I’ve built some confidence in practice now.

GN: [laughs] Awesome! I bet! Now, we’re just gonna switch over to a couple fan questions for you. Alex wants to know: Could you outrun your favorite animal?

GN: Yeah, that probably would have been a good question to ask first—

RM: Oh! Actually, I think I’d go with a jaguar. I don’t think I could outrun one.

GN: Okay! Hali wants to know: if you were stranded on a desert island, which teammate would you pick to help you survive?

RM: Ooh. That’s a tough one, I gotta think on that one. I think I’d go with Jaxsen Weibe. He’s a farm boy and I think he’d just… he would figure it out pretty quick, I guess.

GN: Which one do you think would get you both killed the quickest?

GN: So, last but not least, what’s a message you have for Oil Kings fans?

RM: Just stay tuned! It’s gonna be a good season and we’ll try to get as many wins on the board for you guys, and yeah! It’ll be an awesome season, so keep watching.

GN: Awesome! Thank you so much, Rhett! I appreciate you coming on, and best of luck this season.

RM: Thank you! I appreciate it, and thanks for the call.

GN: Of course, thank you. Have a good one!

Rhett Melnyk and the Edmonton Oil Kings will next take on the Prince Albert Raiders on Friday, October 21, at 6 PM PST. If you want to watch this interview, click here. Catch The WHL Show live on Tuesdays at 7 PM PST.