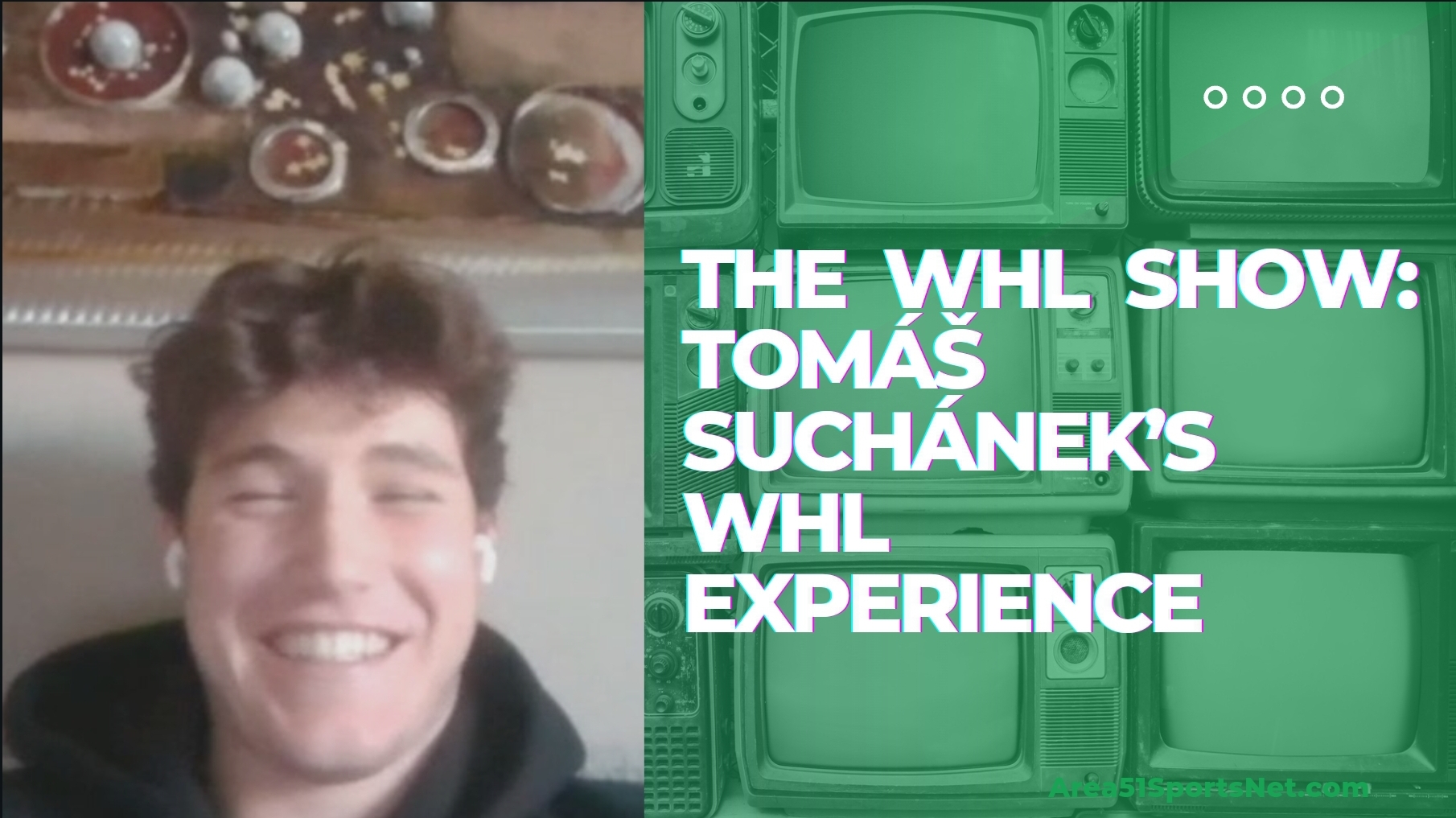 Tri-City Americans goaltender Tomáš Suchánek joined Gabriel Neumann on the fifth episode of The WHL Show. Below is the transcribed interview.

Tomáš Suchánek’s year has been off to a good start. This season, he has a .917 save percentage and a 3.50 goals-against average. The goaltender has played seven games so far, with three wins. His first win this season was on September 24, in an 8-3 victory over the Prince George Cougars.

Gabriel Neumann: Alrighty, perfect! Thank you so much for joining me. We’re basically just going to be going over your season and what we’ve got going on. I’m gonna jump right in.

GN: In your interview with Lizz Child last season, you mentioned that you used to want to play as a forward and not a goalie. Can you tell me more about that?

TS: Yeah, when I was first starting to be hockey player, or just starting skating, I was forward for like first four years. And I always like it, but then I just, for one tournament, we were missing goalie, so Coach just put me there in the net. And I played really good. I think I won best goalie of the tournament, and they told me, “ah, you’re staying there.”

GN: You’ve been stuck there since, yeah? Did you ever try to go back to being a forward?

TS: Oh, I always wanted to be forward, you know? Like, I remember even when I was eleven years old and I was trying to convince my mom and coaches that I want to be forward. But they said, “no, you are too good at goalie, so you cannot go from the net.”

GN: Love it, that’s so great. Did you have a favorite NHL team growing up?

TS: I remember I was fan of Chicago Blackhawks, because that time when I was heard about the NHL or something like that, they were winning Stanley Cup almost every year, so that’s the reason why I was their fan.

GN: Yeah! So, looking at your team and you as a player, what mindset do you have going into this season? What are you focusing on?

GN: Absolutely! What about the team’s mindset? What is the team focusing on?

TS: I think our biggest focus is just to make playoffs this year, you know because we didn’t make it last year, we had a lot of losses, so. It’s something we want to working on and be better team and make a playoff.

GN: For sure. What have you been seeing your team do well this season so far?

GN: Absolutely. Looking at last season, what advice would you give your last season self?

TS: Hm…  I would just say enjoy every day. Season is long, but it’s really short, it’s going by fast, so just enjoy every moment here with the guys. Yeah, just be positive and getting better every day.

GN: I love it. Can you describe your game for me?

TS: I would say my game is really about reading the game well. Just getting there, playing right.

GN: What are you working on specifically this season?

TS: Focusing on just be perfect in everything that I am doing right now, because I’m really good in a lot of things but I need to make it perfect. Just be focusing on doing it at 100%, not 95%, not 99%, just 100%. That’s the biggest thing.

GN: Got it. Gotcha. So, looking at the Americans, who’s a teammate that you would least want to play against?

TS: Uh… it’s a tough question, because I would love to play against everyone, you know?

TS: Like, joking with them about… uh, I would say… ooh, yeah. Who can be like the… I’d probably say Lukas Dragicevic. It would be really tough to play against him because he is always in the front, just going always with the forwards to front. So yeah, I would not like to play against him.

GN: Who is a player on an opposing team that you would want to play with? Any team.

GN: Absolutely, that’d be awesome! Which underrated teammate do you think fans should keep an eye on this season?

TS: This year I really like Andrew Fan. I think he made really big improvement from last season and I really like how he’s playing this year so far. So, I think it will be him.

GN: Awesome! Now, looking at your entire career, which goalie tandem your whole career has been your favorite? Which goalie have you most enjoyed playing with?

GN: Nice! Now, if the Americans didn’t exist, which WHL team would you most want to play for?

TS: I would probably say Seattle Thunderbirds because I really like their fans. It’s always fun to play there, so probably Seattle.

GN: Awesome. Now, tell me about— do you have any NHL goalie idols? Either retired or currently playing.

TS: I’ve got three! It was like, through my whole career, it was always Carey Price. I always love to watch him and everything. And the last few years Igor Shesterkin and Juuse Saros.

GN: Do you model your play after any of them?

GN: Right, of course! So, looking at your gamedays and such, do you have any superstitions or rituals?

TS: I wouldn’t say I have any special rituals. I just like to do every warm-up same, you know?

TS: Every game same warm-up. Same thing. But not, like, any special rituals.

TS: I just roll out, you know, and stretch. And just some dynamic warm-up, throw a few balls, juggle a bit. That’s it.

GN: And what does a typical gameday look like for you?

TS: Like, after the warm-up or with the morning warm-up too?

TS: So on home games we have morning skates too. Eat breakfast, two breads with peanut butter and jams, and… yeah, then just go on the ice. Warm up. And then after the warm-up go to get lunch with guys, most of the team. Going to get sandwich, go home and sleep for like 40 minutes, then eat chicken.

TS: Yeah, I need to sleep for, like, 40 minutes at least. 30, 40 minutes is best. And yeah, then eat chicken and rice and then get ready for the game.

GN: Is it chicken and rice every game?

TS: Most of the games. Sometimes our billets make pasta, but lots of times chicken and rice.

GN: Nice! So, if you weren’t playing hockey, what would you want to do with your life?

TS: I would probably business man. Because I really love to do that. I want to even do it right now when I’m playing hockey, you know, just to create some business or something like that. Something that I love to do and just love learning about it so it’s probably the thing I would want to do.

GN: Yeah! So, in Lizz’s interview last year, you mentioned that Carson Haynes has the best locker room music. Now that he’s moved to the [Vancouver] Giants, who do you think has the best music?

GN: Okay, cool! Who are you closest to on the team?

TS: There is like lot of guys who I’m close to, but I would say it’s Nick [Avakyan]. And then my team player I’m living with, Reese Belton, I think yeah I’m really close to him too.

GN: Awesome! What nicknames did you have as a kid?

TS: I had Suchos, like everybody in Czech call me that, and right now. And in America everybody’s like calling me Tommy.

GN: Tommy. Love it. And that’s the same nicknames you have now?

TS: Yeah, most of the guys call me Tommy. I think it’s my nickname.

GN: I remember in the interview you mentioned also “Tomashi” was another one?

GN: Yeah, I love it, it’s great. So, later on, I’m bringing on an Oil King: your former teammate, Rhett Melnyk. I was wondering, what is one question you would like to ask him later?

TS: Can I have three question?

TS: Because, I have one that will be like bad, but I have to ask him.

TS: [laughing too] That is gonna be the first one, yeah. I had to say it, you know?

TS: And second will be: how he enjoy to play in Edmonton because is his hometown, so. I hope he likes that. And third one will be… if he can finally score in practices now I’m not there anymore.

TS: So that will be the question.

TS: After you ask him, make sure you tell him I like him and I am just saying hi to him.

TS: Because he is awesome guy.

GN: We’re going to fan questions now, some fans sent in some questions for you. Brianna wants to know: what’s your favorite holiday?

TS: My favorite holiday is probably… I was with my family in Maldives. So that was probably my favorite one.

GN: Nice! Hannah wants to know… uh, it’s a little out of the box, but she wants to know: do you think you could outrun a hyper puppy with long legs?

TS: I’m gonna be honest, I really don’t know what is that, but—

GN: She has a dog, and she wants to know if you can beat it in a race.

GN: Cool. I’ll tell her, I’ll be like, “he said yes!” Hali wants to know, how do you feel being a cinnamon roll?

GN: Love it. Here’s a fun one: Michaela wants to know, would you rather fight a hundred duck-sized horses, or one horse-sized duck?

TS: Uh… probably one horse-size duck. It will be easy. So I will choose that.

GN: Especially in your goalie gear, when you’re like—

GN: Awesome. And then, Alex wants to know: out of all the NHL goalies, who do you think you could beat in a fight?

TS: Honestly, I think I can beat everyone.

TS: You know, I believe in myself. You have to. I would like to say I could beat everyone there.

GN: Absolutely, yeah! And, last but not least, what’s a message you have for Americans fans?

GN: Thank you so much! I really enjoyed talking with you.

GN: You have a great day!

Tomáš Suchánek and the Tri-City Americans will next face off against the Everett Silvertips on Friday, October 21, at 7:05 PM PST. If you want to watch this interview, click here. Catch The WHL Show live on Tuesdays at 7 PM PST.