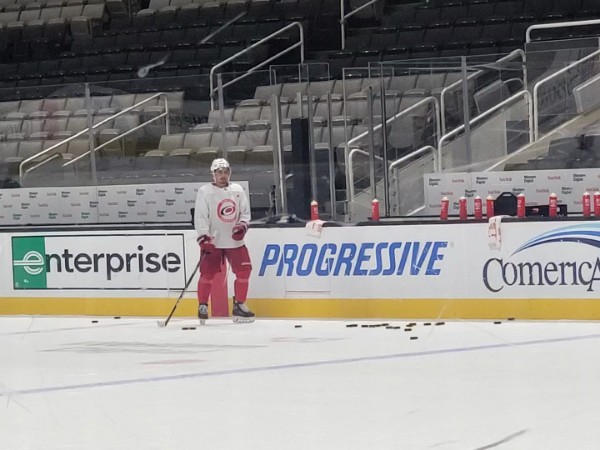 Former Portland Winterhawks star and current Carolina Hurricanes forward Seth Jarvis is no longer a rookie in the NHL. Just under a year ago, on November 22, 2021, Jarvis played in his tenth game with the Hurricanes, solidifying his spot in the NHL. And yes, he is still enjoying every moment.

With a full year of professional hockey now under his belt, the 20-year-old says he still is excited, both looking back on the past year and looking ahead to every game this season.

“I’m still having a ton of fun. I mean, I love it every day and it just keeps getting better.”

As for what he’s learned throughout his time with Carolina, the importance of taking care of himself is at the top of the list

“I’m still young, but you pick up a lot of stuff from the older guys on how to treat your
body right and be sure to be ready for every game.”

Especially with Rod Brind’Amour as a coach and Brent Burns as a new teammate, fitness and making sure the body is in peak condition is something he has great examples to follow and learn from in Carolina.

While Jarvis says that he was pretty relaxed throughout his first year in the NHL, if he could go back and give himself any advice ahead of last season, he’d start by saying to relax and have fun. However, the former Winterhawk went on to add a second bit of advice as well.

“I thought I handled it well, but just know that you belong and you deserve to be there.”

First of the season

Of course, fans who have been following Jarvis and Carolina know that he scored the first Hurricanes goal of the 2022-23 season

While scoring the opening goal of the season for an NHL team in his sophomore season is a big moment, he didn’t realize that the goal was his at first.

“Well, I thought Fishy [Sebastian Aho] tapped it in so I was excited for him.”

Though once he realized that the goal was his, he said it was cool, but as we’ve learned before, Seth Jarvis is a huge team guy.

We don’t need to see it anymore. If you haven’t seen it, a quick Google search will be all you need to find out what Seth Jarvis is talking about.

Over the summer, Jarvis says that taking care of his body after the concussion was the biggest thing he focused on. Though it’s been four months since the hit and the concussion, Jarvis says he still doesn’t remember anything about it.

“That’s the tough part about it, but I mean, just recovering from it’s tough. I never
had to deal with one that was that serious. So just going through trying to get my
memory back, dealing with noises lights, all that stuff was a little annoying,
but I’m better now so that’s all that matters.”

After his recovery, the focus shifted to working on his strength.

“I’m not the biggest guy, so it helps to be a little stronger down low and be able
to handle the big guys up the NHL. [Working on] just being able to be more sturdy
on the ice and not get pushed around as much.”

In Portland, your go-to restaurants were Chick-fil-A and Potbelly, but what’s the place in Raleigh?

SJ: I don’t want to say it on here. It’s… some kind of pasta

What are your top three Halloween candies?

Just as he answered this, the Carolina Hurricanes strength coach walked out and heard him. There was absolutely an unhappy glare and some words exchanged (all funny… mostly). Seth, if you’re somehow reading this, hopefully he wasn’t too hard on you later!

If you weren’t playing hockey, what would you be instead?

SJ: Probably a construction worker or something.

Would you rather play a game on defense or a game with an off-hand stick?

If you were a fruit, what fruit would you be, and why?

SJ: A nectarine because it tastes good.

By the way, Seth Jarvis did have a message for Winterhawks fans:

SJ: Enjoy the year and have fun!