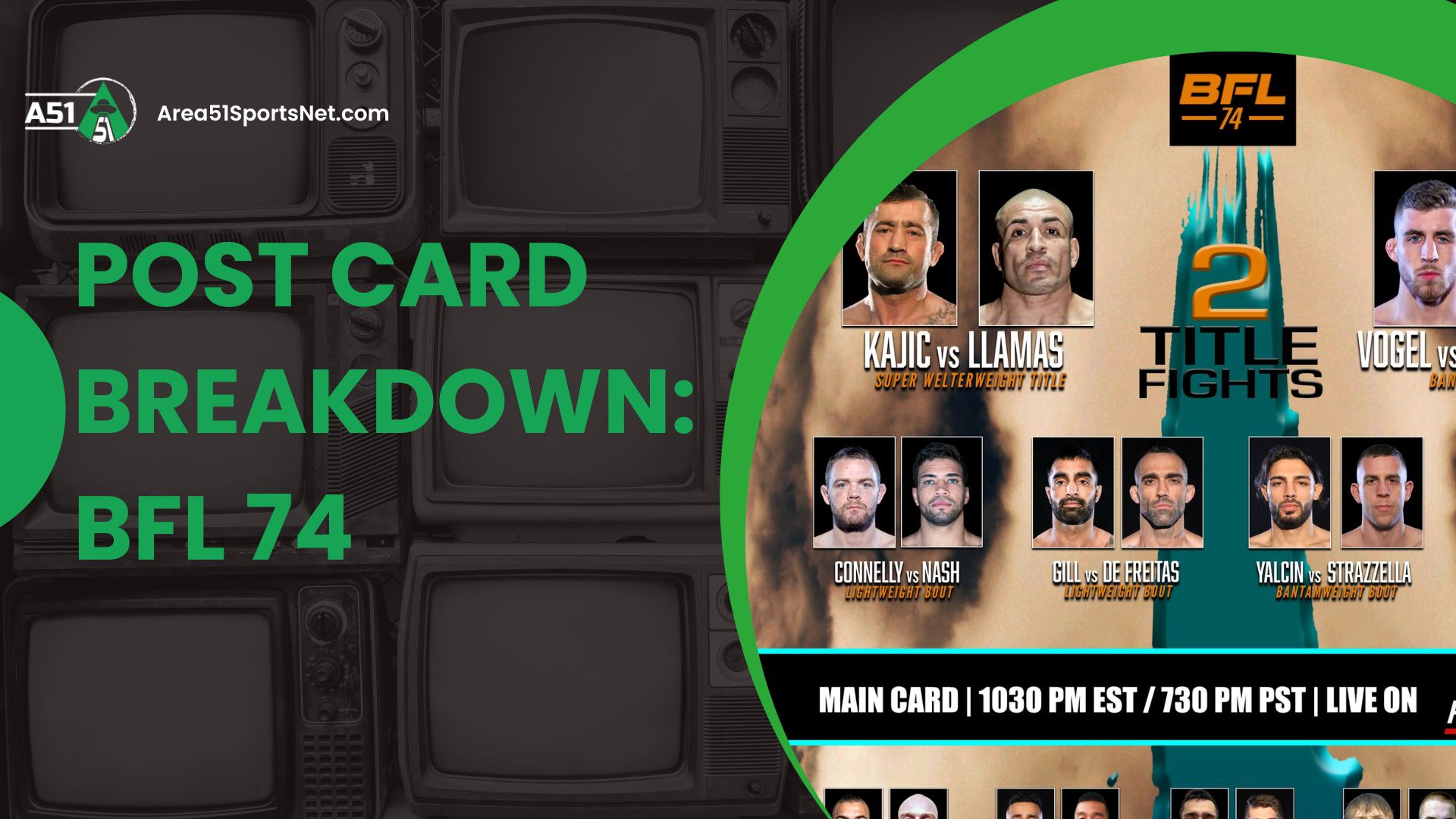 It was another wild night of Canadian MMA at BFL 74 on UFC Fight Pass. The card opened with a bout that was originally scheduled to be an amateur title fight. Instead, it was switched to be the first pro fight in both men’s careers with Sina Maani taking the win. The next 3 fights on the main card, the underdogs stole the show. Makinde Adeyemi, Gagan Gill and Xavier Nash all grabbed wins. The most impressive of the group, Nash, managed to dominate the former UFC fighter, Tristan Connelly. The night then closed with two title fights and both men retaining their titles with exciting brawls. All the fights, along with the BLÜ BONUSES for the night, are described below.

Sina Maani def. David Chen by Submission in the 2nd Round

Chen opened HARD, lunging in for a massive takedown. Only 20 seconds into the fight and he was in dominant control of the grappling. He was controlling Maani well, but Maani was landing some decent elbows from the bottom. Maani eventually got back to his feet but was hit with a HUGE shot that had him wobbling back into the fence. Amazingly, Maani recovered, getting into some WILD exchanges with Chen. Chen then decided to bring the fight back to the canvas, where he had Maani pushed up into the fence.

Chen had clearly snagged the 1st Round, but it was Saani that looked to be the fresher guy in terms of energy. After some decent grappling from Chen, Saani used that extra strength to drag him to the canvas. From there, Maani locked in a DEEP choke, really threatening the finish. Chen slipped out of it, but found himself getting elbowed in the face, then stuck in another couple of DEEP submissions. Sadly for Chen, he just couldn’t defend anymore and was forced to tap.

Both men were a little hesitant early, trying not to get dropped by a huge shot. Finally, it was Adeyemi who landed the first bomb, wobbling the legs of Labrecque. Labrecque landed a couple of good ones, but Adeyemi responded with some big, big shots that had Labrecque backing up. After a decent takedown attempt, Labrecque was then reversed along the fence, clearly losing the round on the cards.

Labrecque’s corners were asking for more output going into the second, sadly, he was quickly pinned into the fence. From there he was shredded apart by a beautiful flurry along the fence from Adeyemi. Adeyemi followed that up with a couple of nice combos. Labrecque had a decent moment along the fence, but never really landed anything significant, clearly down 2-0 on the cards.

Labrecque was walking forward aggressively but was getting lit up pretty badly by some HEAVY combos. Finally, after 2 rounds of work, Labrecque notched the takedown and found himself raining down elbows on Adeyemi. He then maneuvered around to Adeyemi’s back and locked in a beautiful rear naked choke. It was looking rough for Adeyemi, then he somehow managed to reverse Labrecque, finding himself on top. It wasn’t enough to win the round back, but it was pretty clear Adeyemi had taken it 29-28.

Gagan Gill def. Adam De Freitas by TKO after the 2nd Round

De Freitas got his striking going early, rocking Gill with some CRISP jabs. Gill landed a few shots himself, but De Freitas was clearly the more skilled boxer. De Freitas then followed it up with a beautiful takedown. They went to their feet, then it was Gill that stole the momentum, grabbing a takedown of his own. Finishing the round with some nice ground and pound, I’d have actually given the round to Gill.

De Freitas opened with some more crisp shots but was then countered hard, getting ROCKED by Gill. De Freitas then tried to take the fight to the ground but was quickly reversed to his back. That allowed Gill to fight for a finish, slamming elbows into his forehead. With a MASSIVE shot landed from Gill right at the bell, De Freitas crawled back on his knees all the way to his corner. Barely able to sit on his stool, the doctor was forced to call an end to the fight, giving Gill the 2nd Round TKO.

Connelly never stopped walking forward. Although it was Nash that was landing some nice shots, Connelly used his pressure to push Nash into the fence. Sadly for him, it was Nash that found himself on top. Clearly the better submission threat, from the bottom, Connelly locked in a NASTY armbar. Nash managed to defend it well, eventually finding himself on top of Connelly again. With the control time and damage coming from Nash, I’d have given him the opening round on the cards.

Connelly came in hot, but Nash opened with a fantastic takedown. Connelly locked in a guillotine, but Nash retained control, eventually finding himself on the back of Connelly. This dominance continued for the majority of the rest of the round, clearly putting him up 2-0. Connelly opened heavy once again, landing a slick combo and pushing him into the fence. He was reversed… then he slipped in another NASTY guillotine! He had it locked in multiple times, but, each time, Nash shut it down and worked for top control and ground and pound. The final 30 seconds were a whirlwind, but they made it to the final bell, where Nash had clearly grabbed the win.

Mateo Vogel def. Taylor Christopher by TKO in the 3rd Round

Both men were landing some good shots early. It was Christopher that landed a big one first, stumbling Vogel backward a bit. Trying to land from a distance, Vogel was lighting up the legs of Christopher. After getting pieced up on the feet, Vogel decided to get his grappling going. He was close on a couple of takedowns but was shut down. After getting blitzed at the end of the round, he had clearly lost the round on the judges’ cards.

Vogel kept his kicks going early, but was still struggling with the combos of Christopher. It was close for the first couple of minutes, then Christopher started to slow down. Vogel kept up his relentless pressure going, starting to really wear him down. With a WILD flurry at the end of the round, it may have been enough for Vogel to steal the round. Both men opened with some heavy combos, but it was Vogel that landed BIG. He then followed it up with a HUGE takedown, slamming Christopher’s head into the canvas. Vogel landed a couple more bombs on the ground, defending his belt with a 3rd Round TKO.

Llamas opened with a couple of… unusual striking techniques but managed to land a couple of combos. After waiting him out for a couple of minutes, Kajić started to open up with his striking. Kajić was clearly the more skilled striker, but, with all that activity, it seemed likely that Llamas was up 1-0. After finding his rhythm, Kajić was more active in the 2nd Round. That being said, Llamas would have the odd flurry, pushing Kajić back. The fight started to heat up near the end of the round with both men landing a LOT of shots. Llamas’ face was banged up while Kajić was bleeding from a couple of cuts.

After getting his cut reopened at the start of the third, Kajić landed a head kick that cut his opponent open. Llamas switched it up with a quick takedown, but Kajić quickly returned to his feet and knocked Llamas back into the fence. From there Kajić landed a couple more HUGE shots, but Llamas was standing his ground, making this fight the clear brawl of the night.

Kajić landed a couple more CLEAN shots to open the 4th Round. After that though, the striking was back-and-forth with both men landing the occasional combo. With one round left, it was anyone’s guess as to how the judges were scoring the fight. It might’ve been tied 2-2, but anything was on the table.

Llamas looked good early, then Kajić started to land some big shots, backing Llamas up. As the fight was rounding out, Kajić was starting to land some BOMBS. Llamas wasn’t phased though, trying to land combos until the final bell. With all the damage, I’d have probably given the fight to Kajić, but this bloodbath could have gone in either direction. The judges ended up scoring it 48-47, 49-46 and 48-47 for the champ, Dejan Kajić.

KO of the Night: Mateo Vogel

Sub. of the Night: Sina Maani

Brawl of the Night: Dejan Kajić vs. JC Llamas

Most Valuable Fighter: Xavier Nash
This was the result on the main card that surprised a lot of people. He came in 6-5, facing a fighter that just came from the UFC. He didn’t just scrape by with a decision either; he dominated Connelly to get that win. I don’t know if that kind of record is good enough to make it to the UFC, but he can certainly make it to a big promotion with this kind of talent and grit.