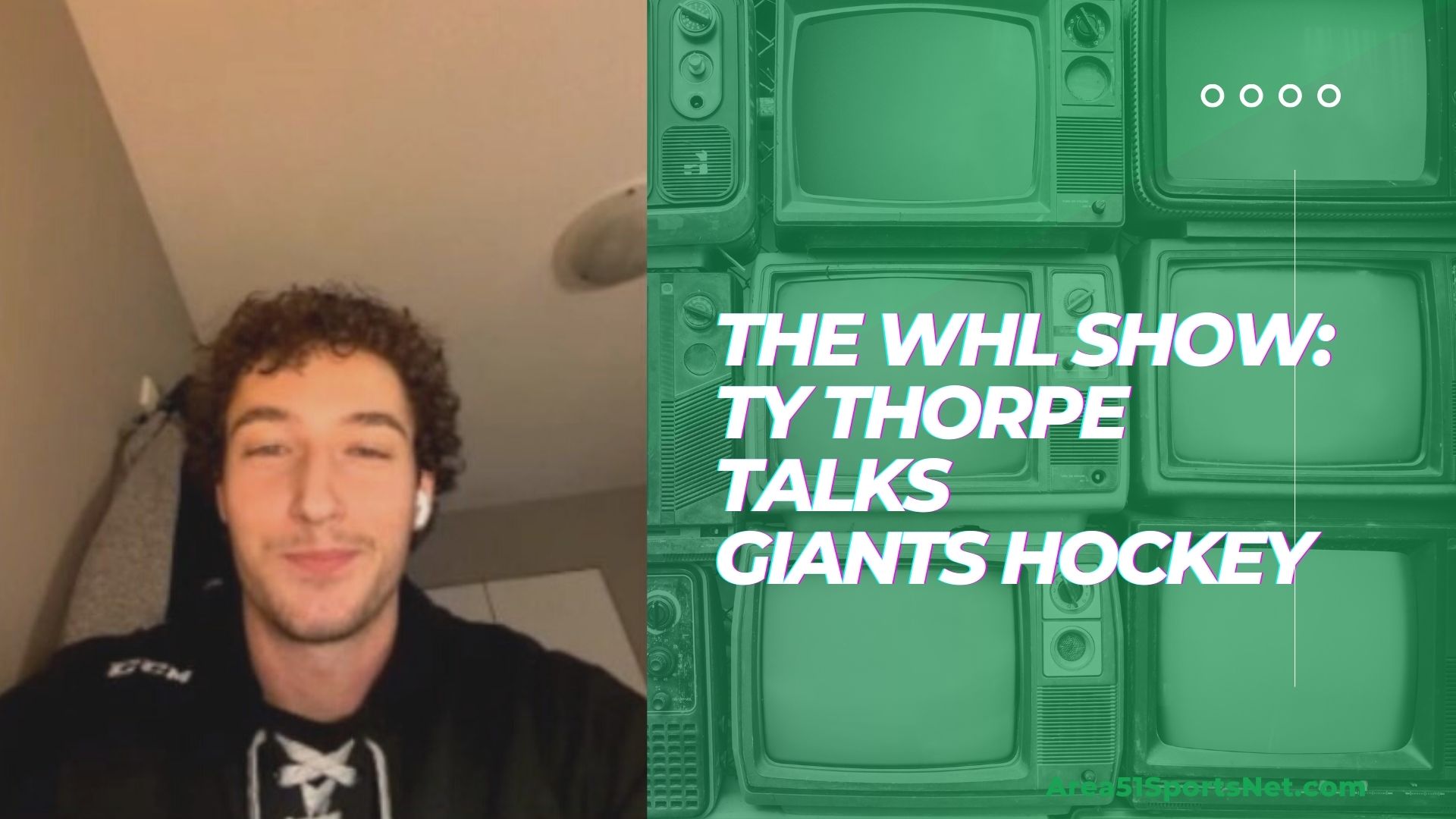 Vancouver Giants forward Ty Thorpe joined Gabriel Neumann on the fourth episode of The WHL Show. Below is the transcribed interview.

Ty Thorpe has had an impressive start to his season, with five points (3G-2A) in six games played. He scored his first goal in Vancouver’s first game this season on September 23. Last season, he had 44 points in 62 games, with 16 goals and 28 assists.

Thorpe was drafted by the Victoria Royals in 2017 and played for the Brandon Wheat Kings for three years before heading to Vancouver.  He is 20 years old, so this year is his last year in the WHL.

Gabriel Neumann: Thank you for joining me today! Jumping right in: The Giants have had some hard-fought games, but obviously, some didn’t have the result that you guys have wanted. What, for you, has been your mindset going into the 2022-23 season?

Ty Thorpe: First off, thanks for having me, I appreciate it. I think that we are starting to form an identity and we know what creates success for us. We need to be a hardworking team, we need to play on both sides of the puck and get pucks behind them and use our forecheck. We’re obviously a big team as well so we use our size, and I think that’s been our key to figuring out who we are and what we need to do to be successful.

GN: Absolutely! What strengths have you guys been developing specifically? Which ones do you want to highlight for us?

TT: I’d say a big one is our systems, especially defensively. Making sure we’re able to lock things down and, like, when we start running around, being able to return to our systems. I think that’s been a big key because we’re going to have to rely on our defensive game, not just from our defensemen but our forwards as well. On the flip side, getting in on the forecheck and playing below the goal line. Being able to keep teams hemmed in and creating zone time and net pressure. That’s a big key for us.

GN: Awesome. So you’ve played really well this year so far. What advice would you give your last season self?

TT: That’s a good question. I’d say to stay consistent. You know there’s always going to be ups and downs and sometimes the pucks gonna go in and sometimes it’s not. Being able to return to the things that make you successful as a player is key so you can overcome the sort of ebbs and flows of the season.

GN: This season specifically, can you describe your game in 30 seconds or less?

TT: For sure. I’d say— my role has obviously grown over this year and I’m a solid two-way forward. I play on both sides of the puck. I work hard, I compete, I win battles. I’m a good playmaker. And I’m kind of relied on in every situation in the game, including faceoffs. For me, it’s being good on both sides of the puck, making good plays, moving my feet, winning battles. And also contributing offensively.

GN: You mentioned your role this season; would you consider yourself a pest on the ice?

TT: At times, yes, definitely, I’m not afraid to go to the hard areas and battle. That’s definitely a big element of my game and it’s one of those things that kinda makes my game tick, so I definitely stay true to that identity.

GN: Love it. Who else on the team would you say is [a pest]?

TT: Hm… we’ve got a few guys for sure. I’d say [Damian] Palmieri can get into it. Not just on the ice but also, like, chirping guys or getting under a guy’s skin. [Colton] Langkow is another guy. And then [Nicco] Camazzola, so. We’re definitely not short on guys who like to play on the edge.

GN: Speaking of your team, who’s a teammate you would least want to play against?

TT: I’d have to say Jesper Vikman. He’s a really good goalie. I’d be hard-pressed to get any past him.

GN: Of course. And on the flip side of that: Who’s a player on an opposing team you would like to play with?

TT: I’d say one guy that—I don’t really know him but I have a lot of respect for—Jared Davidson on Seattle [Thunderbirds]. He’s a really solid player. I see similarities in my game, but he’s hard to play against. He’s really good in the faceoff circle, he can score, he kinda plays in all situations as well. That’s one guy I’d like to have on my team.

GN: Love it! Now, which underrated teammate should fans keep an eye on this season?

TT: I would say [Kyren] Gronick, Grony. I think he’s a really solid player. Thinks the game well, can move well, has a great shot. I think he’s gonna have a really good season this year.

GN: Awesome! I look forward to seeing it! So, if the Giants didn’t exist, if they were never formed, which WHL team would you want to play on?

TT: Brandon, my old team, just ‘cause obviously back in Manitoba I know everyone there. That’s probably my answer, just Brandon, even though I’ve already played there.

GN: That works! This season, who are you most excited to have the opportunity to play against? I know Brandon, because they were your old team, but besides them, who would you say?

TT: Yeah, obviously Brandon because I played there and they’re coming here soon so I’m excited for that one, but maybe Regina. It’s another good team out east and I have a friend on that team. They also Bedard, obviously, so I love playing against high competition.

GN: Branching out, looking at the NHL now— who would you say are your NHL idols?

TT: Probably McDavid and Draisaitl. Being an Oilers fan, I obviously always watch them. They’re two of the best in the world, so I’d say those two.

GN: Great choice! Now, would you say you have any superstitions or rituals?

TT: Not really. I mean, I try and stay away from too many superstitions, but I do have a lot of routines. I like to keep a journal that I write in before the game, just kind of coming into the game with a mindset and how I feel. It’s just something I’ve found, at least, over the season it’s a thing you can come back to and reflect on. It definitely helps.

GN: I love that! What does an average game day look like for you?

TT: So at home, normally we’ll go to the rink in the morning. Hop on the bike, go on a walk, stretch out, and then we’ll have some video, just going over our opponent for the night and some of the key things to watch for. Go home, maybe have a quick snack, you’ll take a nap for a bit and then you’ll have your pre-game meal and then after that you gotta head to the rink. It’s kind of a long drive, but you leave in the afternoon and get ready for the game at the rink.

GN: Do you have a go-to pre-game meal?

GN: If you weren’t playing hockey, what profession would you want to go into?

TT: That’s a good question. I’d definitely be in school right now. I’m taking a few classes actually. I enjoy writing, but it’s something I kinda do in my spare time. I’d like to stay in some academic field.

GN: Yeah, of course! What do you like writing?

GN: Yeah! So later on today we’re going to be bringing on goalie Brett Mirwald. What’s a question you would like to ask him?

GN: Sounds good, I’ll ask him that for sure. We’re gonna go ahead and move to some fan questions, where I asked people to send in questions for you. So Matt wants to know: Where did your passion for hockey sprout?

TT: So, I kinda started playing right away when I was like, four years old. My dad at our old house back home built a rink in the backyard, so I’d always go on there and skate with my brother. He was a goalie, he’s older than me, so I’d go out there with him. And also playing mini sticks with him in the basement, that sort of thing. So I kind of just grew into it.

GN: Awesome! Theo wants to know what your Starbucks order is.

GN: Smart, good choice. Brianna asks, are you more of a crocs or Birken person?

GN: Tracy asks, if you could pick a personalized goal song, which one would you pick?

TT: That’s a good question. I forget the name of it, but the Chicago Blackhawks used to have a goal song that I really liked in the early 2000s, 2010s. I think it was Chelsea Dagger? Something like that, yeah.

TT: Well, now my main one is just Thorpey, pretty standard. But one, it’s kind of random, but I used to get called Skippy as a kid. I don’t where it even came from but I guess it just kinda stuck. A lot of my old friends used to call me that.

GN: Sidebar18 on Twitter said: “It’s hard to believe an NHL team hasn’t picked up Thorpe yet. Best faceoff guy in the WHL, relentless on the puck. How does he like playing for the Giants?”

TT: I love playing for the Giants. I’m super grateful I was able to come out here. I really got into a fortunate situation and everyone in the organization has been good. Everyone I’ve met here has been great. I’ve fallen in love with the city and I’m super grateful.

GN: Awesome! We’re glad you’re in Vancouver! Last but not least, what’s a message you have for Giants fans?

TT: I’d just like to say thank you guys, we really appreciate your support, and we’re gonna be battling hard all season and I’m excited to see you all at all the games this year.

GN: That’s it! Thank you for coming on today, Ty! I really appreciated it, really enjoyed talking with you.

Ty Thorpe and the Vancouver Giants will next face off against Thorpe’s old team, the Brandon Wheat Kings on Friday, October 14.

If you want to watch this interview, click here. Catch The WHL Show live on Tuesdays at 7 PM PST.