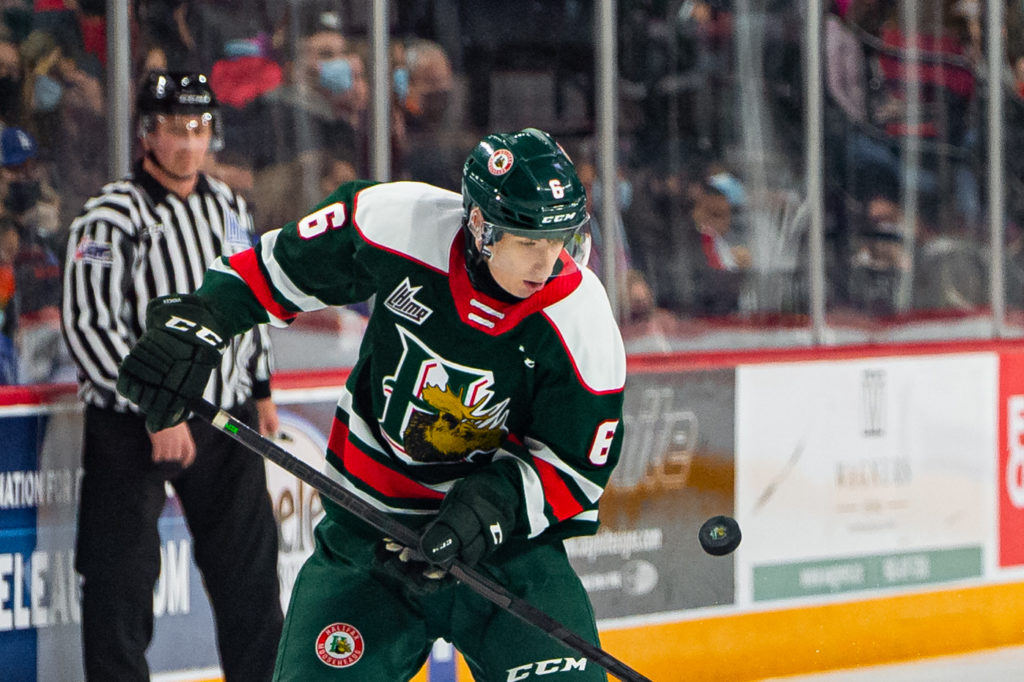 What a difference a year can make. The Halifax Mooseheads were the youngest team in the QMJHL in 2021-22 and took a step forward as a team. Their 3-0-1 start to the 2022-23 season indicates this team might be ready for a much larger leap into the realm of contention, not only in the wide open Maritime Division, but across the QMJHL.

Starting the season without Zachary L’Heureux, the Mooseheads had to adapt without one of their top players. They did that by acquiring 20-year-old forward Stephane Huard from the Sherbrooke Phoenix on the eve of their season opener.

The acquisition has paid immediate dividends with Huard finding the net at a critical moment in a 6-4 victory over the Acadie-Bathurst Titan last Wednesday which eventually stood up as the game winning goal.

“He had 19 goals in Sherbrooke last year and he had to work for each one of them,” said Head Coach Sylvain Favreau. “We know he can bring scoring to our hockey club, and not only that, the experience of a 20-year-old addition helps the team.”

The addition of Huard also helps the team add depth and allowing the electrifying trio of Jordan Dumais, Markus Vidicek and Mathieu Cataford to stay together for the foreseeable future.

Recording 25 points through their first four games of the new season, the trio is poised to continue their scoring ways with the newfound depth in the lineup.

“Things are going very well, and our line has been playing with a lot of chemistry.” Said Dumais. “We’re playing very fast out there and that’s what has been working so we want to be able to keep that going.”

Dumais is looking to build on his 109-point draft-eligible season in 2021-22 and is well on his way to doing that with 11 points to kick off this season.

The veterans and stars are not the only ones thriving either, with rookies Owen Phillips or Brody Fournier already making strong impressions on Favreau.

“He’s been so poised with the puck and so early in the season at 16-years-old, he’s already making great plays,” said Head Coach Sylvain Favreau of Phillips. “We really wanted to ease him into the lineup, but for me he’s solidified himself in our top-four.”

The 16-year-old Phillips found the back of the net for the first time in his QMJHL career, marking a milestone for the native of Hammonds Plains, Nova Scotia.

Fournier, meanwhile, has found ways to contribute when he is not scoring goals.

“Fournier is 19 but he’s still in transition from junior A to major junior,” Favreau said. “He’s got a ton of speed and he’s gotten better every game. So even though it’s an empty-net goal, you still have the skill to knock the puck down like that and then put it in.”

Fournier scored 37 goals last year in the Central Canadian Hockey League for the Smiths Falls Bears, indicating his role could be best suited by putting him in a position to score.

“He’s a guy at the junior A level was first or second in scoring in the CCHL last year so he’s used to scoring goals.” Said Favreau. “He was itching to get one and now he has it so it’s a huge relief.”

Despite a blip on the radar Friday night versus the Victoriaville Tigres, the Mooseheads bounced back Saturday, spoiling the home opener for the Charlottetown Islanders with a 3-1 win.

The key for the Mooseheads this year will be growth and maintaining focus. While there have been points of concern in each of the first four games, they have found their way out of precarious moments, earning the benefit of the doubt to start the season.

Halifax will hit the ice again on Thursday night at 7:00pm when they host to the Drummondville Voltigeurs at Scotiabank Centre.