Whitecaps end their season with a 2-0 loss in Minnesota 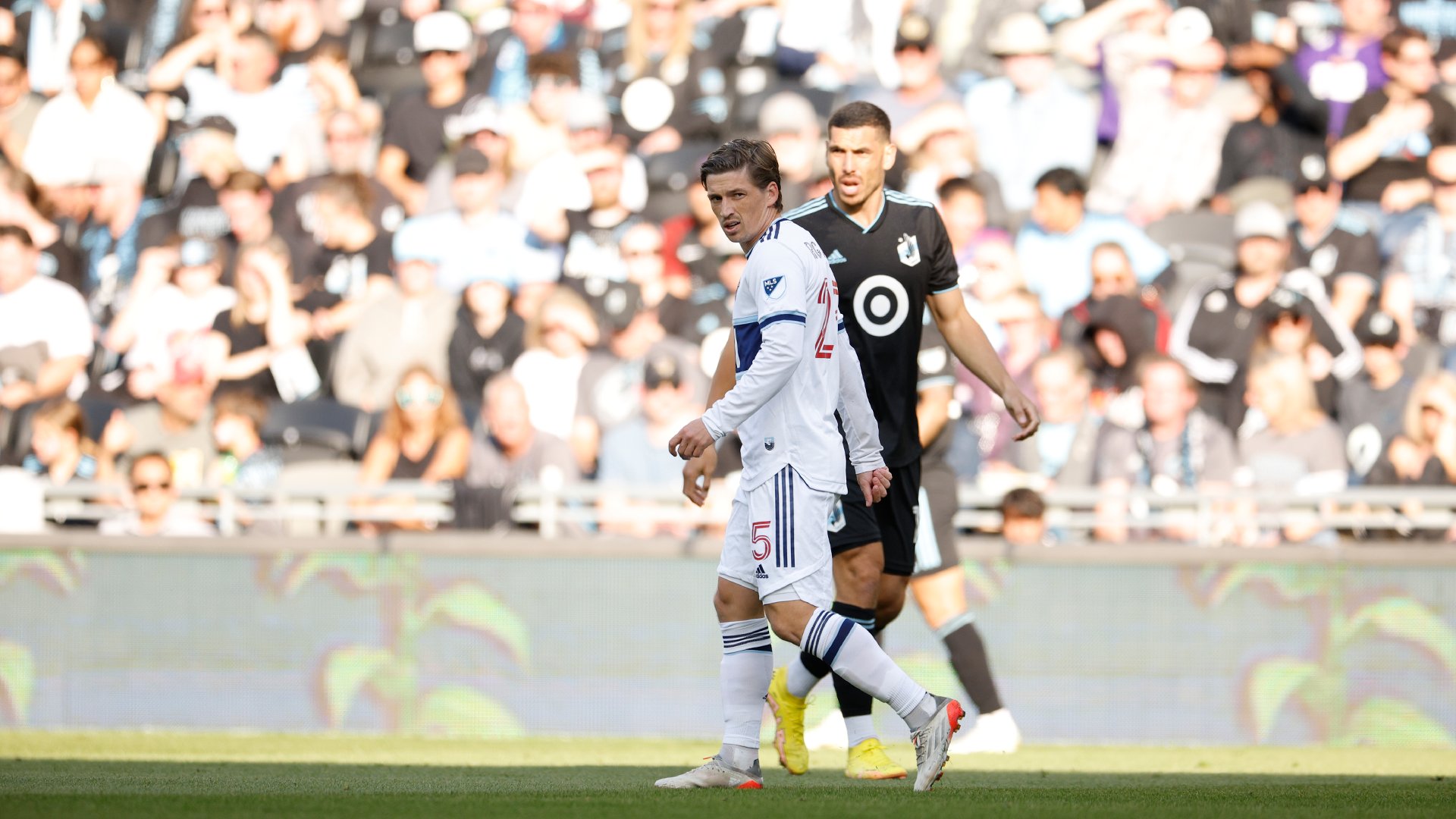 The Vancouver Whitecaps went into their final match of the season with everything to play for but came out the end with a loss to Minnesota United.

The loss marked the end of their unlikely playoff push over the past month. However, many will now look back at the entirety of the season and wonder, without those first eight matches, what if?

If anyone was expecting Vanni Sartini to tinker with his lineup for this final regular season match, they would be sorely disappointed. The head coach opted for the same lineup that beat Austin FC last weekend and the Seattle Sounders before that.

But for a coach that is well known for tinkering, having the same lineup in back-to-back-to-back matches is almost unheard of.

However, Sartini has found a tactical system that not only is working but is also showing signs of quality football.

The back 4—something more than a few people were calling for months ago—remains. The centre-back pairing of Ranko Veselinović and Tristan Blackmon has been stellar, helping the Whitecaps to two clean sheets in the last three matches.

But that is not to discount the playing of Thomas Hasal in the net. He has returned from his injury with a renewed confidence level and is playing with a maturity that few young goalkeepers possess. True, it would have been nice to have seen this at the beginning of the season, but that can also be said for almost any of the players on the pitch during those first eight matches.

Luís Martins is enjoying a bit of a renaissance in his career at left-back. He has found space along the left flank to run with the ball if he chooses given Ryan Gauld tends to roam into any free space during the attacking phase. Martins does tend to play a bit too much with his back to the attack, which can limit his passing options, but in the past few games, he has started to open his body up and let the ball run across him, which has given him more options. As he has opened up, so has the space in front of him, the benefit of his playing ability and his teammates.

Gauld, Pedro Vite and Julian Gressel have become an attacking trio that is comfortable in the fluidity they have been given. While Brian White will always remain at the top, the other three attacking players seem to instinctively understand their respective movements, which has benefitted the Whitecaps well over this three-match run.

The midfield pairing of Andrés Cubas and Russell Teibert has been effective as well. Cubas’s ability in winning balls is one of the best in the league. But it also lets Teibert run higher up the pitch, something no other proper central midfielder on the Whitecaps’ roster does. Yes, the hope is that Alessandro Schöpf will take over that role, but it has not happened yet. Interestingly, the Austrian is also not named to the bench.

The Whitecaps are in the in-form team between them and Minnesota United. But the Loons will recognize that losing entry into the playoffs will be not only a failure of their season but it would also be regarded as a monumental capitulation given their position a couple of months ago.

The Whitecaps have also ridden on luck to get where they are right now. They headed into this match hoping that their luck was not over just yet.

The Whitecaps began the match playing more compact than in their previous few matches. Gone was the hard press, trying to push the defence into making mistakes. They were playing the smart game, sitting lower and waiting for Minnesota to make their own mistakes.

But it was the Whitecaps who had the first pair of quality chances. Cubas took a hard shot from outside the 18-yard box, which was parried well by Dayne St. Clair. However, he was not able to hold onto it, and the rebound went out to Gressel. The German’s shot was low and hard, but St. Clair was able to regroup and tip it over the bar.

Emanuel Reynoso was showing why he is the dangerman for Minnesota. He was trying to pull the string in the Loons’ attacking half, but Blackmon and Veselinović kept the box clear, giving their goalkeeper room and space.

However, it was the home team that got on the scoreboard first. Reynoso stole the back from Cubas and dished it out to Franco Fragapane. He moved to the top of the 18-yard box and beat Hasal low on the right side to put the Loons up by one.

Minnesota was playing comfortably after the goal. There had no reason to move with urgency as a win or a draw guaranteed them a playoff spot. But Vancouver’s game plan of compactness was giving the Loons the space to be comfortable.

There was a possible penalty in the 42nd minute on White. The striker went down from a tackle that came in from behind, but nothing was given.

Minnesota controlled the remainder of the half easily as the ‘Caps weren’t pressing them into changing their plan. It left a lot to be desired for the second half.

The Whitecaps started the second half with no changes to their line. But there also did not seem to be any changes to the game plan either.

Minnesota was still being given space to operate, while Vancouver sat back and absorbed the pressure.

Vite has an opportunity in the 57th minute. His run onto the flick-on from White beat all of the defenders, but the shot was directly at St. Clair.

Lucas Cavallini and Leonard Owusu came on in the 62nd minute and instantly made an impact. Cavallini had a good chance only a minute later, which led to White hitting the crossbar. The play was offside, but it was a welcome change in the level of intensity from the Whitecaps.

The final nail in the coffin came in the 77th minute. The ball was crossed into Vancouver’s box, but a bad bounce off the defender ended up with it finding the foot of Jonathan González. The Minnesota player had just come onto the pitch and tapped it in with his first touch to make it 2-0.

Gauld had a free kick in the 81st minute, one of the better chances for Vancouver. But St. Clair made the excellent save, keeping the Whitecaps off the scoreboard.

That’s how it would end, with St. Clair playing for the clean sheet and the Whitecaps missing out on the playoffs, ending their unlikely run of the last few games.

Sartini said he felt the players did well, but that the bounces did not go their way this afternoon.

“I think that, tactically, we did well today. We did well in terms of number of chances are the same at the end with them, if not more than them. St. Clair made a couple of good saves where we could have finalized better,” he said.

He did not believe the weight of the playoffs had suddenly come back to the players; it was a matter of not capitalizing on the chances they had.

Gauld said the chance of the playoffs did not play a role in the game either.

He called the game a frustrating one, and he said that Minnesota lined up well defensively against them

“I think not as good as we could have been. I don’t think you can look at the game and say that we deserved to win, which is frustrating. Not that we necessarily had a bad game, just don’t think we’d done enough to win.”

Teibert, on assessing the entire season, chose to look at the positives.

“We won the Canadian championship and that’s a huge accomplishment and achievement for this club. Anytime you win a trophy, you can be super proud of that. We went through a lot this year. Highs and lows and we stuck together. That’s what I’ll remember.”

Minnesota managed their two goals with an xG of only 0.9. In comparison, the Whitecaps had 0.5 xG.

That wraps an end to the season for the Vancouver Whitecaps. They finish in 9th place in the Western Conference.

They will now turn their attention to assessing their current roster of players and looking towards the off-season to bolster areas where they believe need attention.

We can look back at the disastrous beginning of the season, those first eight matches, as what hindered the Whitecaps from pushing further this year. There were changes to both the tactical system and roster throughout the year that brought positive changes, but it remains to be seen what those changes could achieve with a full year.

With Sartini heading into a final contract year, people will be watching.