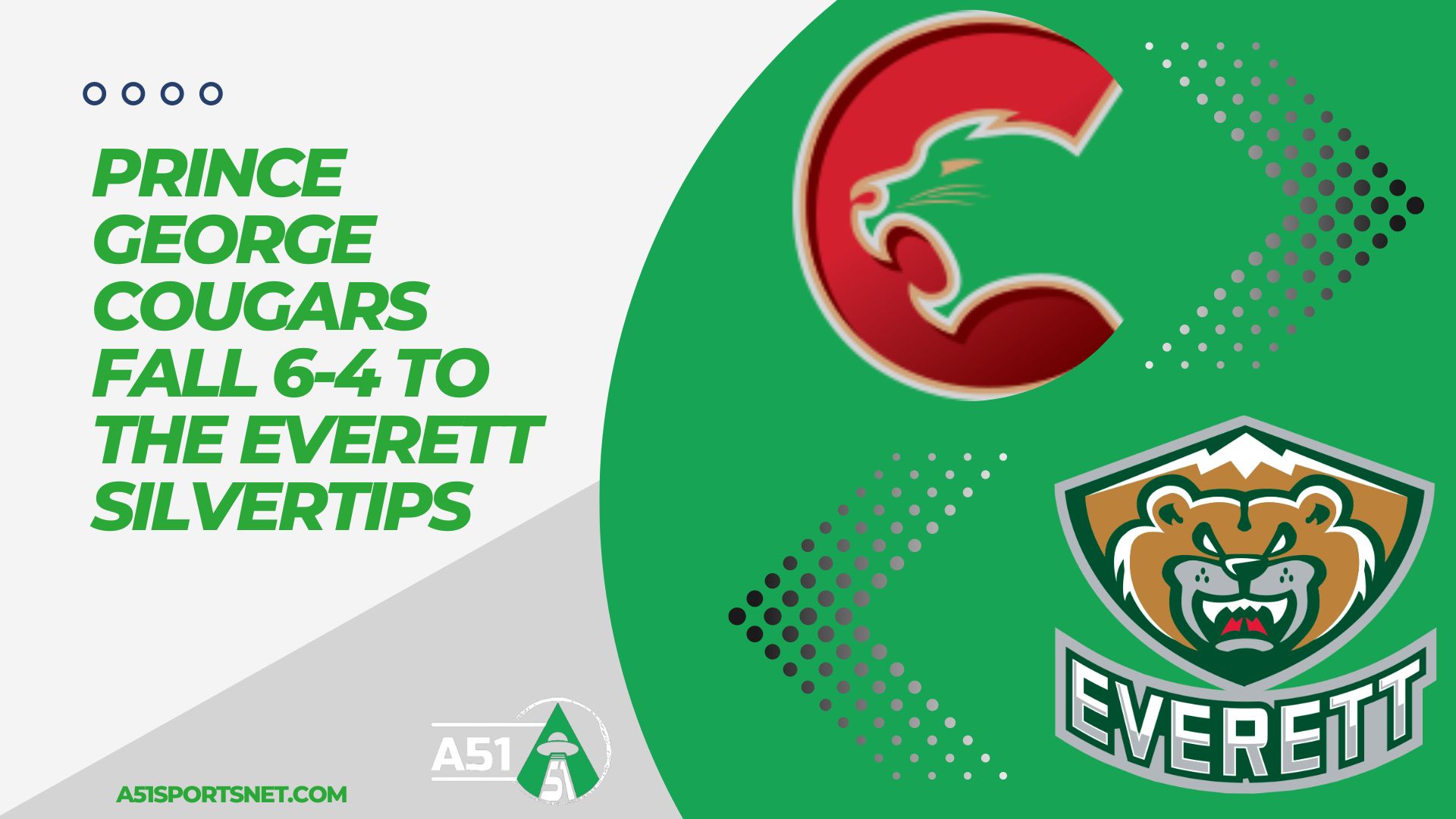 The Prince George Cougars took on the Everett Silvertips for the first time in the 2022-23 season, losing 6-4 in an exciting second half of a back-to-back.

The Cougars were coming off a 4-3 shootout victory against the Vancouver Giants the night before. Their season so far has been a strong one, with three wins and two losses. They have a strong roster, with Chase Wheatcroft, Koehn Ziemmer, and Hudson Thornton being notable names.

The Everett Silvertips had a tough 6-3 loss against the Medicine Hat Tigers on Friday. The game was an exciting one, with over twenty penalties and too many fights to count. The Tips, who more than likely underestimated the Tigers last night, were expected to come back swinging against the Cougars, and that they did.

The first period was less than fortunate for the Cougars. The Silvertips came out the gate swinging, keeping most of the action in Prince George’s zone. The first goal of the game came only 54 seconds in, scored by Jacob Hoffrogge and assisted by Ryan Hofer. It was Hoffrogge’s first WHL goal.

Andrew Petruk, number 26 for the Silvertips, earned the first penalty of the game at 4:32, when he was called for a check to the head. Although Prince George were on the power play, they didn’t manage to score, and Everett killed their penalty successfully.

From the way the Cougars were playing, it was clear they weren’t expecting Everett’s bloodthirst. They didn’t have a lot of time with the puck, playing as if they were hesitant and unsure of themselves, and their shots on goal reflected that.

At 14:19, Prince George picked up their first penalty when Chase Wheatcroft was called for hooking. Everett capitalized on their power play, scoring shortly after at 15:52. Dominik Rymon was credited for the goal, assisted by Beau Courtney and Ty Gibson.

The Cougars’ defense needed more confidence going forward, as every time the Silvertips got close to the net, all defensive strength seemed to wane. Goaltender Ty Young saw a lot of action in the first period, saving 19 of 21 shots, while Everett goaltender Braden Holt had it easier, saving all nine shots that came his way.

The second period brought a lot more action. The Cougars were more active with the puck, although the Silvertips still saw more time in the Cougars’ zone. Barely two minutes into the game, Cougars captain Ethan Samson was called for cross-checking, sending Prince George to the penalty kill, which they successfully killed.

At 10:56, Silvertips captain Jackson Berezowski was sent to the box for an embellishment penalty, much to the distaste of the Everett crowd. Forty seconds later, Aidan Sutter joined his captain in the penalty box for cross-checking.

Chase Wheatcroft scored Prince George’s first goal on the power play at 12:09, assisted by Hudson Thornton and Koehn Ziemmer. This lit a fire under the Cougars, who scored again at 13:11, this time by Ziemmer, who was assisted by Riley Heidt and Ethan Samson.

Caden Brown was called for roughing at 14:13, and Jacob Hoffrogge joined him for unsportsmanlike conduct. Again, the Everett crowd was not happy about this particular call.

Keaton Dowhaniuk joined Brown in the box at 15:28, called for roughing.

When Brown got out of the box, he did not hesitate— he scored the Cougars’ third goal at 16:21, short-handed and unassisted.

The first two power-play goals from the Cougars motivated them, and they were more aggressive with the puck and in general had more confidence. On the obverse, the Silvertips floundered for a few minutes and struggled to catch up.

Going into the third period, it was expected for the Cougars to draw as many penalties as possible. As the second period progressed, they were getting desperate. They were breaking up plays, but not enough, and their defense still lacked.

Coming into the third period, the Silvertips had their spirit back. The Cougars did too, and it seemed like they continued their strategy from the second period: Draw as many penalties as possible, and throw the Tips off their game.

At first it worked: Ben Hemmerling was called at 2:09 for slashing, and the Cougars went to their sixth power play of the game. They didn’t do much with it, however, and did not score.

Shortly after, Ryker Singer was given a two-minute minor for roughing, and Prince George successfully killed the penalty.

The Cougars’ special teams were not as strong as desired. Although they did have the short-handed goal in the second period, it was an outlier, and the Cougars continued to struggle to maintain a core strength on both the power play and the penalty kill. Most power plays were scoreless; most penalty kills were scored on.

The Prince George skaters were absolutely using their bodies, but they weren’t making many smart hits. Although it was a very physical game, it felt like the Cougars could, and maybe should, have done more, either by smarter physicality or being more precise with the hits they did make.

Stats-wise, the rest of the period didn’t see a lot of action until 15:41 when Riley Heidt scored, assisted by Koehn Ziemmer, bringing Prince George up 5-4.

Although Cougars fans were hoping they could tie it and force overtime, Jackson Berezowski took advantage of their empty net (Young having been pulled earlier for an extra attacker) and scored the Silvertips’ sixth goal of the game.

To start the game, the Cougars’ special teams were, to put it kindly, a mess, but as they progressed, they did improve and get tighter and more carefully executed. Overall, though, they needed more defensive strength and more confidence with the puck.

“I think we just gotta play an all-around game,” Koehn Ziemmer said after the game. “I think we’re offensively skilled, our team, but in the d-zone we need to work on some stuff.”

When asked about the team’s strategy going into the game, Ziemmer was confident with his answer. “Obviously we had a big win last night in Vancouver, and we were just gonna build off that. We knew they were gonna come out hot here so we were just trying to contain what they had to show.”

How did your mindset change going from period to period?

“Obviously we were down 3-0 after the first so we just had to play our game and we knew what to do. They’re obviously fast, a good team. It was hard but we pushed back, tied the game there and it just slipped away from us.”

The Cougars will next take on the Brandon Wheat Kings on Wednesday, October 12 on home ice.