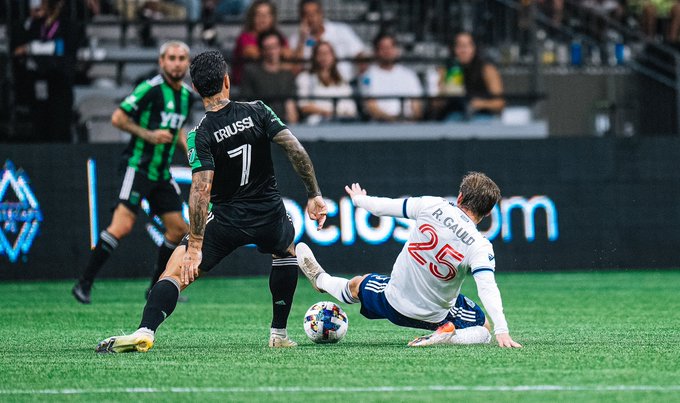 The Vancouver Whitecaps needed a win over Austin FC (and out town scoreboard help) to keep their playoff hopes alive. They did the job against one of the highest-scoring teams in MLS.

For the first time ever, Whitecaps head coach Vanni Sartini went with the exact same lineup for two games in a row. It worked two weeks ago against the Seattle Sounders so why not?

Plus, Lucas Cavallini and Javain Brown just got back from international duty on Thursday. Brown played against Argentina and Cavallini did not play for Canada’s games against Qatar and Uruguay. So it is no surprise that they started the game on the bench.

Ryan Gauld, Pedro Vite and Julian Gressel were the stars of the show against Seattle. All three showed off their creativity in that game and it makes sense that Sartini started them again. It’s been two weeks, after all.

Andrés Cubas was once again starting alongside Whitecaps Russell Teibert in the midfield. Cubas left the game against the Sounders with a left abductor injury but used the break (he was initially called up for Paraguay but couldn’t go due to the injury)to recover. It looked like he was in good shape in training and was ready to start his engine against Austin.

It has been a disappointing year, to say the least for Brian White. Two games left in the season including tonight, and I would like to see him get on the scoresheet again. He just needs the confidence to end the year and that will make him look forward to next year.

Same lineup but will the same result happen?

It was chippy from both sides to sides to start the match. However, there was a nervy moment when Hasal almost gave the ball away to the Austin attackers but managed to turn around the defender. Hasal had all of BC Place holding their breath.

Just after that. Vite managed to give a beautiful through ball to Gauld and he made no mistake beating Brad Stuver. The 20-year-old from Ecuador’s confidence continues to grow and his chemistry with Gauld. It looks like the 4-2-2-2 formation suits him really well. He has talked about homesickness and it seems he has gotten over that. As for Gauld, not only does he have creativity he has got some pace as well.

A pretty good start for the Whitecaps and another first goal for them. Now, imagine telling someone that a month or two again.

The Whitecaps wanted more. There was another nice pass from Vite but this time to Gressel but his pass was too hard for Gauld to catch up to. That is what you like to see. Vancouver looks dangerous on the counter-attack and the creativity of Vite, Gressel and Gauld gives Whitecaps fans a beacon of hope when they enter Austin’s half.

There was a scary moment in the 18th minute when Blackmon collided with a bunch of Austin FC players. The trainers were out quickly and the former LAFC player was down for a while but later managed to continue. As a result, Jhohan Romana of Austin got a yellow.

Blackmon didn’t look fazed. He made two clearances in a row shortly after. He is an important part of the Whitecaps and even though it is very late in the season, losing him would not be good at all. Clearances and passes that kickoff the counter are what he does best. So far in this game, that is what he was doing.

Every time the ball was around White, he was doing his best Cubas impression. He just wants the ball like a dog wanting a bone.

Austin was mostly using the flanks to create something. There wasn’t much because the Whitecaps defended well for the most part. Whenever Austin tried to create from down the middle, it resulted into nothing.

Gauld was feeling it. The Scotsman was dancing by defenders and winning races to the pitch. He tried a shot but Stuver managed to save it. Too bad, that would have been two straight games with a Whitecaps highlight reel goal. Gauld is the Little Engine that Could. Wait, he’s the Flying Scotsman, which is another famous steam locomotive.

There was no way Gauld was done for the night. He continued to lead the attacking charge and almost picked up an assist but White shot it right at Stuver. The Whitecaps paid money for Gauld last year because he is a dynamic player. That’s exactly what he is.

I think that was another solid half from the Whitecaps and it has just been as good as the first halves against the Sounders and LA Galaxy. They were doing a great job of stealing the ball and the defending and goalkeeping looked solid. Every player on the pitch was displaying a high work rate. This Whitecaps side was showing a lot of fight in them.

The Whitecaps nearly got off to a perfect start to the second half. Gauld managed to cross the ball to White who for some reason, was given a lot of space but Stuver managed to save it.

Sure, White needed to finish that but that was a remarkable save from Stuver. The thing with White is that he needs even just a little bit of space to make things happen. That time, he got a ton but Stuver took away a golden opportunity. But that was the ball for White to finish.

In the 59th minute, White was taken off for Cavallini who was playing for the first time since stopping on Nashville SC’s Alex Muyl’s head on August 27.

It was good to see Sartini make an attacking change even though the Whitecaps were up 1-0. They cannot sit back. As the old saying goes: It ain’t over until it’s over. That is very true, especially against Austin FC.

Austin got their best chance of the game as star player Sebastian Druissi tried to one time a low cross but somehow missed the net. A player of his calibre should be burying that.

Austin’s loss was the Whitecaps’ gain as Gauld once again led the counterattack and found Cavallini sprinting to the box and he slotted it past Stuver. That was a beautiful display of a build-up. Martins has really been improving the last few matches and that was his third straight game with an assist. (Bring him back next year?)

Much like the first half, one thing the Whitecaps were doing great at was winning balls back. It feels like every player on the pitch, minus Hasal has won the ball at least once tonight.

Speaking of Hasal, he hasn’t made a ton of saves but he has done well when relied on. It seemed like he was in a good position to make saves. He also was really letting his voice be heard during set pieces, that’s what you like to see.

Austin FC was pressing in the final minutes but the Whitecaps were going on the counter as soon as they go the ball. Again, they got to keep their foot on the gas pedal.

There were some hostilities near the end of the game. Tempers flared after a foul and Cavallini and former Whitecap Felipe got fouls. How fitting.

But the Whitecaps played a solid game in attack and the back and as the Bee Gees song goes they are “Stayin’ Alive.”

Sartini was very happy with the performance and had his phone out and was scoreboard watching during the press conference.

We destroyed them, we played much better than them, lately, we have been playing very well,” he said. “It’s an amazing feeling.”

Sartini had very high praise for Gauld and rightfully so.

“The beautiful thing about Ryan is that he is a team player,” he said.

The Whitecaps head coach still believes in his team but looked back on the season for a bit.

“If we don’t make the playoffs, it was because of two reasons: Our start of the season and our record,” said Sartini.

Gauld was the man of the match.

“I think all around we were very good against a very good side,” he said.

Gauld also believes the team is better than they are on paper.

“We’ve always known we are better than what we showed and we are finally getting the results,” he said

Cavallini talked about coming back from his suspension and making an impact.

“I needed to prove a point,” said the Canadian striker. “It was tough to watch the last four games from the stands.”

Tackles were 10-4 in favour of Vancouver. The Whitecaps had 22 clearances which were double over Austin who had 11.

It really did take a lot of resistance from Cavallini. He can’t be suspended for Decision Day.

Speaking of Decision Day, that is next Sunday. The Whitecaps will travel to Allianz Field in St. Paul to take on Minnesota United. Kickoff is at 2 PM.

Vancouver has 43 points which are ninth place and are two points behind Minnesota for the final playoff spot at the time of this writing. Minnesota lost Saturday night to the San Jose Earthquakes which saw former Whitecap Shea Salinas score. But LA Galaxy drew to Real Salt Lake and RSL is one point ahead of Vancouver.

If the Portland Timbers lose on Sunday to LAFC and Seattle draws or loses to Sporting Kansas City, the Whitecaps will control their own destiny on Decision Day in Minnesota.