What’s in store for Conor Garland’s second year with the Canucks? 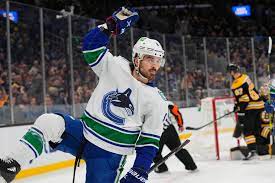 Conor Garland and Oliver Ekman-Larsson both were traded to the Vancouver Canucks in a draft-day blockbuster.

You probably know my thoughts on that trade (Still not good) and we are not going to revisit that. As you can tell by the title, we are talking about Garland.

I’ve always been a big fan of him. Not just because he’s a short guy (still taller than me) but he is a guy who is entertaining to watch.

What are my expectations for Garland’s second year with the Canucks? Let’s take a look back at his first year in Vancouver first.

Garland’s first year with the Canucks

Garland brought the spins. In fact, he did it show much that if you did a push-up every time he did one you would be jacked by now. Take the over on 50 Garland spins next season.

Garland got off to a good start. He got ten points in his first ten games. ( Three goals and six assists) In fact, from the start of the season until December 31, Garland has 22 points in 33 games (Gasp, Sedin numbers!) and that was third on the Canucks behind JT Miller and Quinn Hughes.

Unfortunately, Garland’s production died down. From January 1 to April 1, Garland only had five goals and nine assists (14 points) in 31 games. But he did finish the season on a strong note. From April 2 to the end of the season, he managed 16 points (five goals and 11 assists) in 13 games. Only Elias Pettersson and Miller had more points than him in that period.

During Garland’s funk, the effort was still there. However, there was nothing to show for it. Consistency was an issue for Garland last season.

Let’s take a look at his underlying numbers.

According to NaturalStatTrick, Garland was third on the Canucks in Corsi for with 53.05%. He was the first on the team in expected goals for percentage at 54.52% and third in high danger Corsi with 50.26%.

That means Garland was good at creating shot attempts and scoring chances last season. Despite his big drought, it was a good season for the Massachusetts native. Garland got 19 goals and 33 assists for 52 points. The assists and points were career highs.

There is no doubt in my mind that Garland could reach the 50-point mark again.

Last season was full of ups and downs for him. Garland spoke about that to Harman Dayal of The Athletic near the end of last season.

“I just haven’t felt like myself all year,” said Garland. “I haven’t played a game from start to finish where I felt like myself. My coach in the American League used to say ‘When you play with a clear head you play well’ and I haven’t been able to play like that all year. I don’t know why but it just has happened. But I’ve had some good games, some really, really baf games and there hasn’t been much consistency this year so it’s been a frustrating year but we’re in a chance where we can run the table or go 7-1 and make the playoffs and it can be a great year so that’s what my focus is on.”

Garland was also part of many trade rumours in the second half of last season and the summer. While it was tempting to do so, I’m glad the Canucks kept him. If the offer was really good, (as in can really help the Canucks now) I would have pulled the trigger.

There will be more spins from Garland this season. The guy is a human spinning top or a human Beyblade. He loves to spin and then likes to let his shot rip.

Garland has already settled in with the Canucks. Like any player, he knows he can be better.

My biggest criticism of Garland is that there are times when he holds onto the puck for too long. He tries to do too much with it and just needs to pass it (or shoot if he’s in the right position.) Sometimes, you got to simplify your game I guess.

But he also needs consistency. That means I don’t want to see him going on big offensive droughts.

Garland is on a decent contract and is 26, which is in his prime. He’s a good forechecker who plays bigger than his 5’8″ frame. Garland always plays with energy and I think we can see a big year for him. He’s settled in with the Canucks and he may get more power play time this season.

One thing Garland is good at is going to the net. Canucks fans should want more of this when the regular season begins.

Expect to see more twists and turns from Garland as well as more offensive production.