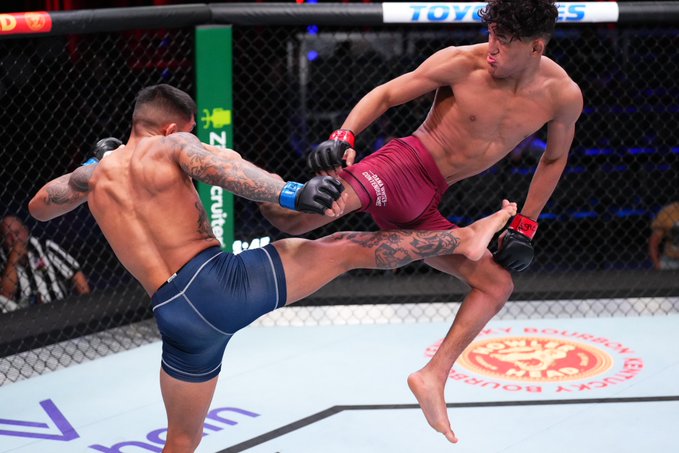 Just when you thought you’d seen it all on the Contender Series, a 17-year-old and a 21-year-old come in and steal the show. Five contracts were handed out once again, but none more significant than the one given to Raul Rosas Jr., the 17-year-old that was absolutely sensational over 3 whole rounds. Nurullo Aliev also made some headlines, not just because he grabbed a contract at 21, but also because he’s now the first UFC fighter from Tajikistan. We were also given a couple of 1st Round knockouts, courtesy of Brunno Ferreira and Austen Lane. Finally, Jafel Filho grabbed a finish of his own over an impressive, undefeated prospect. All the fights, along with the BLÜ’s Power Rankings for the night, are described below.

Jafel Filho def. Roybert Echeverria by TKO in the 3rd Round

Contrary to most flyweight fights, both men took a slow, patient approach to the early stages of the fight. Filho made the first big move, pushing Echeverria into the fence, trying to drag him down to the canvas. It took him quite a while, but Filho grabbed the takedown. Echeverria got back up quickly but was dragged down a second time. From there, Filho locked in multiple DEEP submission attempts. Amazingly, Echeverria got out of them and moved back to his feet. He made it out of the round safely, but likely lost the round, not really threatening Filho with a whole lot of offence.

Echeverria made the first move in the second, wobbling Filho with a big shot. Filho wasn’t phased by it, waiting patiently to land some strikes of his own. Once again, Filho switched it up and threw Echeverria straight into the mat. He had a couple of scary moments though, locked into a nasty heel hook from Echeverria. Both men were cautious to finish off the 2nd Round, but Filho landed the heavier shots, probably taking another round on the cards.

Filho showed no signs of slowing down, lighting him up with a couple of beautiful combos. After a couple more nasty leg kicks from Echeverria, Filho was starting to stumble across the Octagon. Then, just as it looked like Echeverria was starting to land some nice shots and take the round, Filho dodged a beautiful head kick and dropped him on his back. From there, Filho swarmed in to grab the late finish.

It may have taken him until the 3rd Round and he got hit with a lot of leg kicks, but Filho was a clear contract winner. He’s extremely well-rounded, never slowed down, and beat an undefeated prospect.

Nurullo Aliev def. Josh Wick by TKO in the 1st Round

Wick ran straight in and SLAMMED heavy leg kicks into Aliev. Aliev responded with a classic, sambo takedown attempt against the fence. Sadly, Wick wasn’t careful and scraped the eye of Aliev. After a short break, Aliev came in and finished that takedown. Aliev was just using his wrestling pressure to hold Wick down but really started to heat up with his ground and pound. After a flurry of elbows and fists, the ref called it to a stop, giving Aliev a VERY impressive 1st Round finish.

Whenever there’s a 1st Round finish, a contract is coming. Not only that, it’s the way he grabbed the win. He came in, dominated a tough and… honestly kind of dirty fighter (lots of hands in the eyes), and easily grabbed the 1st Round finish. Just like other VERY successful, usually Dagestani, fighters, he uses combat sambo to pressure and control his opponents. This is one of those styles that has always been successful in the UFC.

Austen Lane def. Richard Jacobi by TKO in the 1st Round

Lane was trying to get the action going early, but he got too close and was hit by a heavy counter. After a BRUTAL low blow, the action restarted and Lane landed a couple of decent shots. Once again though, Jacobi countered well. Interestingly, the kickboxer, Jacobi, moved the fight to the ground. Jacobi was in clear control for a while but was actually reversed by the former NFL player, Lane. From there, Lane let loose with his ground and pound, trying to grab the finish. Jacobi was throwing out some submission attempts but never threatened a finish. Lane kept throwing out the ground and pound and eventually got the win in the opening round.

It wasn’t the cleanest win, but Lane grabbed the early finish. This was also his second time on the DWCS, which tends to mean an incoming contract. He’s already put a lot of work in since his loss to Hardy, if he puts in more, he’ll be a great addition to the heavyweight division.

As expected, Rosas threw out the first takedown. Gutierrez fought HARD to not get thrown down there, but Rosas eventually got what he wanted. Thanks to their size, Gutierrez stood back up, but Rosas then took his back, looking for submissions. Gutierrez was doing everything not to get stuck in a submission, but he was getting rolled, twisted, and folded in every way imaginable. After a few minutes of nasty control from Rosas, Gutierrez found himself on top. Rosas then reversed him but ended up getting stuck in a guillotine. In spite of that, it was a CLEAR round on the cards for the youngster, Rosas Jr.

Gutierrez opened the 2nd Round with some combos but was quickly launched into the canvas by a relentless Rosas. Once again, Gutierrez was doing well to defend but was still getting absolutely dominated on the ground. Rosas continued to be absolutely relentless, locking in submissions and giving Gutierrez all he could handle. Gutierrez managed to reverse him and take his back briefly, but Rosas quickly got back on top and went back to work, easily solidifying a second round on the cards.

Gutierrez opened the final round with some nice combos that landed clean, but then, against the advice of everyone, decided to take Rosas to the ground. That was a clear mistake as Rosas reversed him pretty quickly and started to get to work for a finish. The pressure and intensity of Rosas were absolutely relentless, forcing Gutierrez to defend for almost every second of the fight. He never grabbed the finish, but that was one of the most dominant grappling performances I’ve ever seen regardless of the fight promotion.

Like most people, a part of me expected to see a developmental contract for Rosas. But, as I said with Bo Nickal, he’s clearly already at the point where he can do some real damage in the UFC. There have been some talented prospects to come off of the Contender Series, but he could turn out to be the most dangerous in the future.

Brunno Ferreira def. Leon Aliu by KO in the 1st Round

Ferreira opened with the offence first, landing some decent shots. Aliu was countering with some HEAT, really threatening a finish. Then it was an all-out brawl from both men, with both landing wild shots. It was Ferreira who landed the big ones first, putting Aliu on his back multiple times. After a couple of knockdowns and a HUGE power shot, the ref had seen enough and called the fight.

Once again, another clear contract winner. It may have been a short fight, but we saw huge power, an aggressive pace AND durability. He was right in the trenches with Aliu, getting hit hard, but he stayed there and got the job done. He’s also kept his undefeated record intact.

The only contract that most of us were worried about was Rosas’. Dana didn’t question it at all though, making it VERY clear that he was already UFC ready. He said it was an incredible fight and that Raul was clearly very high level and always active and looking for a finish. The other fighters were obvious, all grabbing quick contracts thanks to their finishes.