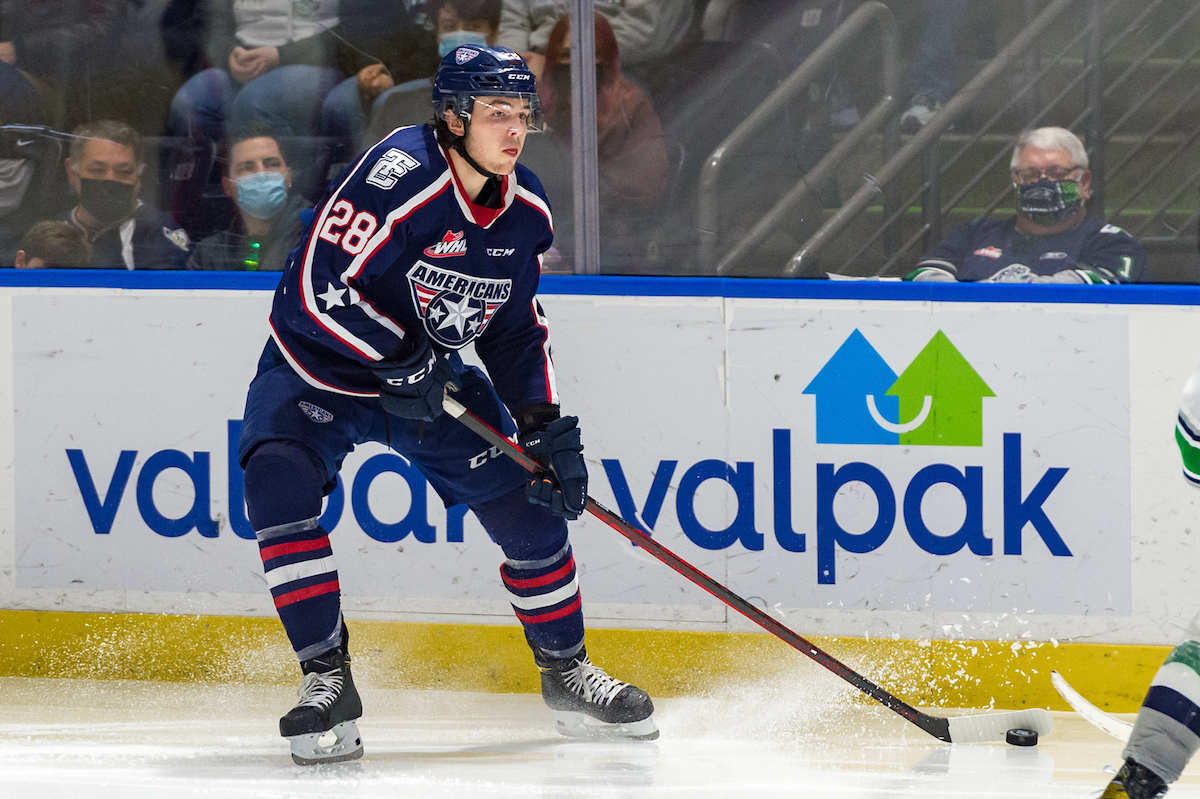 Tri-City Americans defenseman and current captain Marc Lajoie grew up skating on a backyard rink that his grandpa built. It’s where he learned to skate and found his start in hockey.

“I fell in love with the game and just kept on playing,” said Lajoie. “Growing up through St. Albert, and then I went to NAX to play midget. Then, I got drafted here [to the Americans] and here I am now.”

Where he was over this past weekend was in San Jose, Calif. for the 2022 Rookie Faceoff as a rookie camp invite of the Los Angeles Kings.

Lajoie noted that the speed of the games at the Rookie Faceoff was faster than he was used to, but that it was going well.

“The guys are great and I felt comfortable.”

While with the Kings, Lajoie said he’s spending a lot of time with the other WHL players attending camp with the organization. While they are “usually competing and not the greatest friends on the ice,” he said it’s been nice being able to meet everyone “on the other side”.

Being paired with Swedish defenseman Helge Grans, LA’s 2020 second-round draft pick, to start the weekend, Lajoie named him as one guy who had done a great job of helping him learn and feel comfortable, despite the pair having a bit of a language barrier.

Lajoie and the Kings had one day off in San Jose and went out to play some bocce, a game he said he wasn’t too familiar with, but was looking forward to trying.

The rookie camp with the Kings was the first NHL camp Lajoie has attended, and he hasn’t taken the experience for granted.

“I was kind of disappointed, not being able to go to a development camp, but when LA called, I was super excited. It’s a great opportunity to just come here and learn and then try to bring as much as I can back to Tri-City.”

The call from Los Angeles was an unexpected one and wasn’t without a setback:

“I was actually walking my dog and got a call, it cut out halfway through, so I had to wait to call him back. It was unexpected, but like I said, I was excited and it’s been really good so far.”

For those wondering, Lajoie’s dog’s name is Hailey (not sure if that’s the correct spelling…) and she’s a German Shepherd/Bernese Mountain dog cross. After joking that she’s big enough to keep up with the 6-foot-5 defenseman, Lajoie laughed that she’s actually the one pulling him around.

Bringing plenty of new experiences and lessons back to the Americans when he returns, Lajoie is set to captain the team in his fourth season.

“It’s an honor to wear the ‘C’ and lead this group,” noted the blueliner on being entrusted with the leadership responsibility.

Named captain quickly after the end of the 2021-22 season, Lajoie said it was a good feeling and that he was really excited when he found out he would be the next captain.

“I’ve been fortunate to have some really good leaders in my time with Tri-City and learn from them. I’m excited to pass on the knowledge that I gathered from them to the young guys.”

While the Americans went without a captain last season, Lajoie has had plenty of leaders to look up to in his time with Tri-City.

“Especially going back from even when I was 15 and [Nolan Yaremko] was a captain at the time. Just what he taught me about everything — from preparing for games to how to carry yourself away from the rink and even on the ice. The right way to play. Even [Kyle Olson], my first year, taught me a lot.”

As for how he’d describe this year’s team in one word? It’s not quite that simple.

Lajoie and the Americans have a clear goal for the season, and it isn’t just to improve on last season.

“We’ve been doubted the last couple of years and struggled and we’ve been really young, but I think we’ve got a team that’s definitely capable of making the playoffs. I think we’re going to prove a lot of people wrong this year and push hard for the playoffs and then make a push from there.”

While Marc Lajoie’s decision to be a defenseman was slightly influenced by his dad, who also played at the back end, the real reason Lajoie wanted to be in the position was for the ice time.

“I just felt, as a kid, that you get more ice time if you play D, and it kind of just stuck from there. I’ve never really played forward. From a young age, I’ve always been a defenseman, so I’ve just kind of stuck with it.”

Of course, speaking of his father, Serge Lajoie is entering his first season as an assistant coach with the 2022 WHL Champion Edmonton Oil Kings.

With the Americans hosting the Oil Kings in their home opener on Oct. 8, the younger Lajoie says it will be weird to see his dad on the other bench.

“He’s coached me all the way through since I’ve been a kid and taught me everything — how to be a good player and how to be a good person. It’ll definitely be different, going up against him, but I’m excited. I didn’t have the chance to do it when he was with Kamloops. For it to be in the home opener makes it that much more special.”

Get to Know Marc Lajoie

Walk us through your gameday routine:

“Well, last season I’d get up and go to FreshPicks with Connor Bouchard before morning skates. Obviously, he’s not going to be here, so I’ll have to find someone else to go with me, but we’d go get a smoothie. Then we’d come here, do morning skate, and after morning skate we’d go straight to Graze. After, I’ll go home, sit in the NormaTecs for a little bit, and then I’ll take a nap for about an hour/hour and a half. Then I’ll go for a walk, eat my pregame, and then I like to get to the rink about three hours and 15 minutes before the game. I’ll tape my stick. I’ve got a stretching/mobility routine that I go through and then I love to play sewer ball with the guys. We’ll do our dynamic warm-up and video after that, and then it’s on the ice for warm-ups.”

Do you have any superstitions or routines that you have to do?

“No, not anymore. I had to get away from that. When you go to away rinks and stuff, everything’s different and you might not have access to the same thing. There’s nothing for me in my warm-up routine where if I don’t do it, I won’t feel the same or think I’ll have a bad game. I used to be like that when I was 16, so I made sure to get away from that as soon as possible. It’s another thing one of the older guys tried to tell me, so I’m not superstitious at all.”

Are you a pre-game coffee guy?

“Yeah, I’ll get a coffee on my way to the rink. I actually forgot that. I’ll stop at Starbucks and get a cold brew, just black. I have to have a coffee before every game.”

“Honestly, I like to take my days off and not really do anything. Try to sleep as much as possible. If the guys want to go for lunch, I’ll go for lunch. If not, I’ve got a pretty packed billet house. We’ve got four little kids, so I’ll go hang out with them or play video games. When the season gets long and you’re playing every other night, you’re trying to take advantage of the days off. I’m not a big golf guy or anything like that on my off days, so I just kind of like to take it easy and hang out at home.”

Did you ever get a nickname from the team? (Watch this)

“I have not got one. I’ve never even really had one, so I guess Marc is what it is for now. It’s just never really been a thing, a nickname for me. If someone could come up with one, it would be nice, but I’ll just have to stick with Marc for now, I guess.”

“Definitely Ferguson. Ian Ferguson and then paired up with Tyson Greenway. They’re always trying to pull something. Definitely have to be careful if you’re going to take a nap and they’re around.”

Which three teammates would you want on your zombie apocalypse team and what would the roles be?

“I would take Drago [Lukas Dragicevic]. He would be the medic for sure and just hold on to all the stuff we need. Then, I’d go with Serge [Alex Serraglio]. He can attack the zombies, he can fight them for me. Then I’ll go Tommy [Tomáš Suchánek], just because he’s a beauty. He’ll keep us company, make us laugh, and try to keep the mood light.”

Would the group survive?

“Probably not, no. At least it would be fun with those guys.”

“Yeah, or let’s just hope it doesn’t happen at all.”

If you were a fruit, what fruit would you be, and why?

“I’ll just go with maybe a banana. For the reasoning? I don’t know. To be honest, it’s the last fruit I ate so it’s the first one that came to mind.”

Who’s a teammate to watch this season?

“We’re super excited to be back and we’re headed in the right direction. We’re going to have a lot of fun this season.”