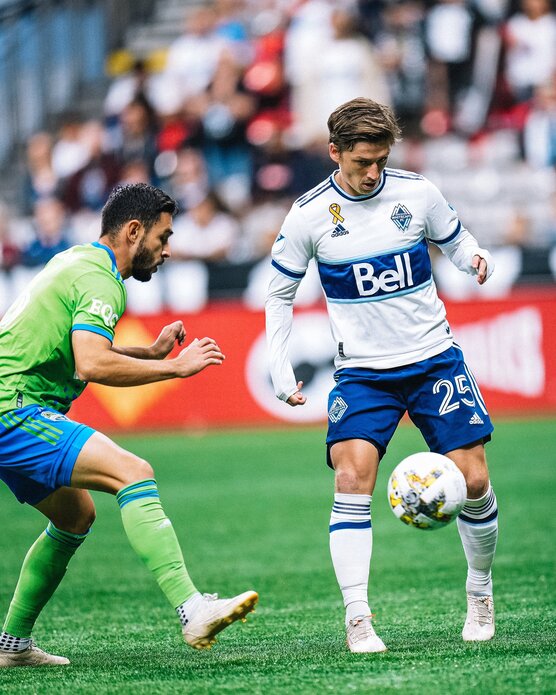 The Vancouver Whitecaps came into their match against the Seattle Sounders having not beaten them in over 15 matches. And yet, they found a way as they took the three points with a 2-1 win, leapfrogging their southern rivals.

Vanni Sartini chose to keep his 4-4-2/4-2-2-2 formation that worked midweek against the LA Galaxy. The back line was also the same and as expected given the performances of Ranko Veselinović and Tristan Blackmon, especially in the first half on Wednesday.

The notable changes were in midfield and the wing. Russell Teibert drew in with Leonard Owusu taking a rest on the bench. Andrés Cubas slotted beside Teibert. Cubas will miss the next match as he travelled to join with the Paraguayan national team.

Julian Gressel took up a more favourable position at the right wing. Gressel has been a bit of a Swiss Army knife since joining the Whitecaps, playing in a few different positions. However, his excellent assist on Tosiant Ricketts’s goal in the last match was enough to warrant a more attacking role tonight.

In all, it was a strong lineup for the Whitecaps and one that should give them chances on the counter against a strong Seattle Sounders side. But given the shellacking they took in the away match on June 14, a 4-0 affair for the Sounders, the Whitecaps had reason enough to believe that nothing about this game would be simple.

Both teams had everything to play for as they were out of the Western Conference playoffs, 9th for Seattle and 12th for Vancouver. Only two points separated the two clubs, further emphasizing just how tight the battle was for the final playoff spot.

What began as a nervy match as both sides played to suss each other out, quickly turned into a positive start for the Whitecaps.

Martins took the first crack on goal, hitting a hard ball into the face of Stefan Frei. The ensuing corner kick from Gressel found the head of Ryan Gauld, but it just went over the crossbar. It was a decent couple of chances in the first five minutes for the home side.

The strong start gave the home side confidence as they press high up the pitch, forcing Seattle to hold the ball as they struggled to get out of their end.

But the match settled back down into a more even affair as time wore on. The Sounders found themselves pushing forward, winning several corners. But the Whitecaps were able to clear and keep their defensive shape as they attempted to transition quickly forward.

And that attacking finally paid off in the 29th minute. Martins got the ball from Blackmon on the left and quickly transitioned it up to a running Gauld. The Scotsman broke with pace, dribbling past his man and into the box. His cross was low and found the feet of Vite. The Colombian made no mistake as he slotted it into the back of the net for his second goal in back-to-back games.

Unfortunately, Cubas had to be subbed off in the 33rd minute due to an injury. Owusu came on for the Paraguayan, which would surely change the makeup of the midfield.

But the change did not hurt the Blue and White as they grabbed a second goal in the 37th minute off a Teibert corner kick. The kick was headed out to apparent safety, but instead found the foot of Gressel. His midair volley from the edge of the 18-yard box beat Frei and gave the Whitecaps the 2-0 lead.

Seattle struggled to find space within Vancouver’s lines. The Whitecaps continued to frustrate their visitors to the end of the half.

Seattle started the second half bringing on Fredy Montero, the former Whitecap, in an effort to increase their attacking pieces. He started early with a low shot in the 47th minute, but Thomas Hasal was able to easily hold it.

The Sounders continued to push forward, however, testing Hasal again and again. For a goalkeeper who had little work to do at all in the first 45 minutes, he was quickly brought into the match and had to be alert.

White looked to have a third for the Whitecaps in the 60th. His shot squirted under Frei, but the goalkeeper was able to reach behind him and pull it off the line. Although it looked as though it crossed the line, VAR ruled it had not, and the score remained 2-0 in favour of Vancouver.

Not to be outdone, Owusu attempted a shot from a long distance. His 30-yard try beat Frei, but not the upright as it pinged off the bar and wide.

Veselinović came up big with his own volley, albeit one for defence. Seattle’s shot in the 75′ minute beat the reaching Hasal, but the Serbian centre-back kicked it clear in midair to keep the clean sheet.

But the clean sheet would not last. Will Bruin got his head on the end of a cross from Montero in the 89th minute, making the remaining minutes some nervous ones for Whitecaps’ players and fans alike.

They were able to hold on though as the Whitecaps beat Seattle at home for the first time since April 14, 2017. The win lifted Vancouver above the Sounders into ninth place overall in the West, three points behind the LA Galaxy in seventh.

For his part, Sartini was ecstatic with the win.

“The performance was amazing, we should have won 4-0,” he said.

He also described Vite’s goal as a “soccer orgasm,” stating it was executed exactly as what had been practised in training.

Gressel said they were aware of the fight the Sounders would bring and that it played a role in their preparation.

“It is what kind of expected in terms of intensity…we didn’t let them walk over us…we didn’t break until the very end.”

Of his goal, the midfielder said, “It wasn’t about picking corners, it was more about getting a clean strike and getting it past Frei.”

Both Gressel and Sartini commented on the crowd at BC Place as well, noting the passion and surge the nearly 20,000 fans gave the team.

While not a team known for its finesse, the Whitecaps are growing into a hard team to play against. Much of that comes from their fearlessness on the ball as well as in recovery.

Take tackles, for example. The Whitecaps massively outpaced Seattle with 15 tackles to the visitors’ one.

White’s unexpected block may have come at a cost.

It’s a bit of a rest for Vancouver as the international break comes around yet again. They will play on October 1, facing Austin FC in their final home game of the season. Kickoff is at 7 p.m.