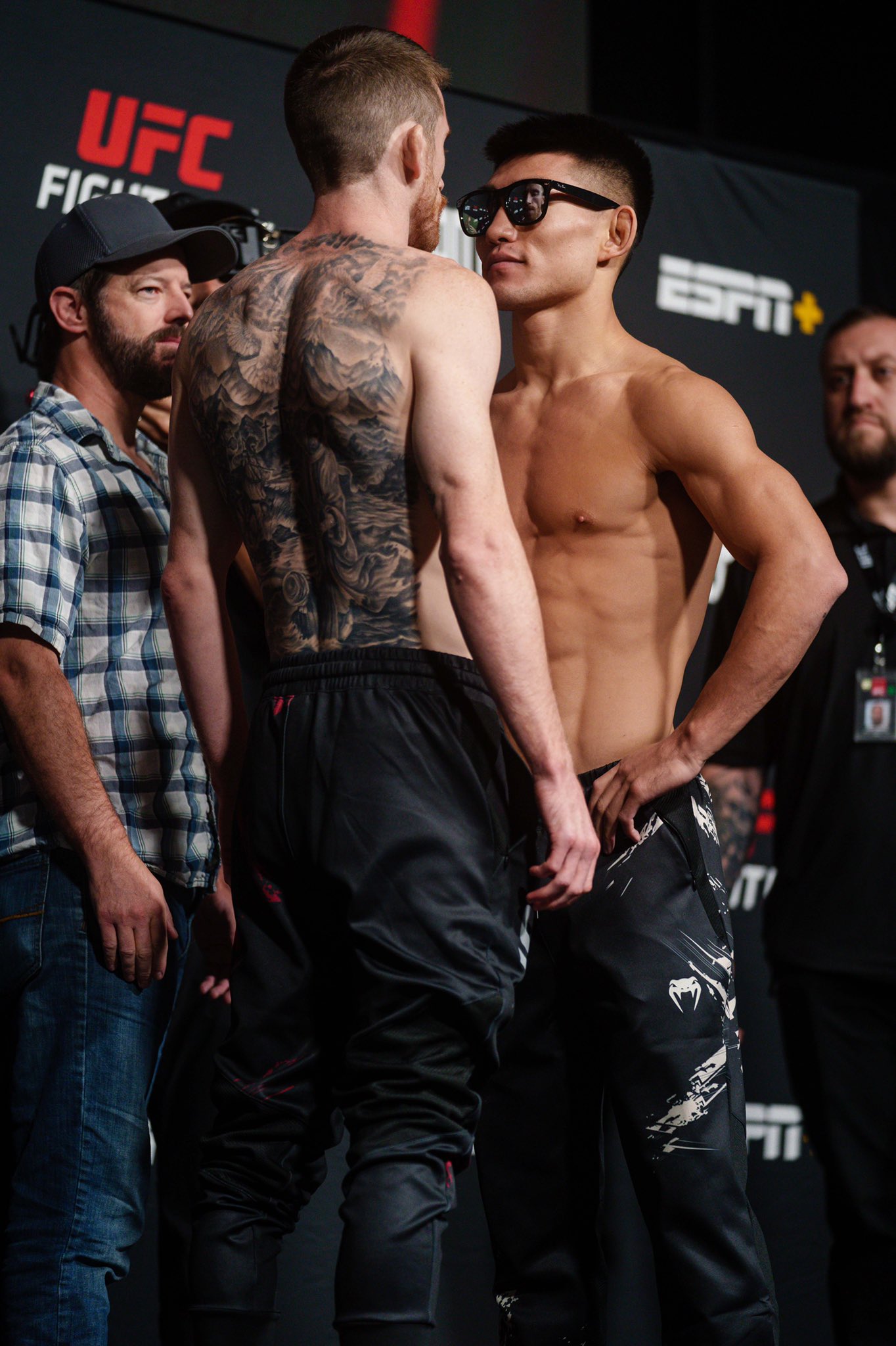 Before the UFC takes another break next week, they’re taking the show back to Vegas for a huge card. The night will be headlined by two of the most exciting names at bantamweight: Cory Sandhagen and Song Yadong. Being that we’re in Vegas, we’ll be seeing quite a few Contender Series contract winners this weekend.

Among others, we’ll see Chidi Njokuani, Anthony Hernandez, Daniel Zellhuber, Tony Gravely, Javid Basharat, and the recent winners, Denise Gomes and Joe Pyfer. Continuing the parade of Canadian fighters we’ve seen the last few weeks, we’ll see the return of a couple of our most promising prospects. Gillian Robertson, Marc-André Barriault and Tanner Boser will all be trying to grab some much-needed wins for Canada. All of these matchups (plus more) are covered below and feature BLÜ’s predictions along with the Bet99 Sportsbook Odds.

It’s an incredible start to the main card for Canada with TWO fights in a row featuring Canadians. Barriault will be representing Canada against another impressive middleweight contender in Hernandez. Both men have had a similar record lately and should have a close, tightly contested fight.

Since grabbing his contract on the Contender Series, Hernandez has gone 3-2, submitting both Jun Yong Park and Rodolfo Vieira, but getting finished by Kevin Holland and Markus Perez. Barriault has gone 3-4 (with another win that was changed to a No Contest) in his last 8 fights. He’s grabbed a couple of good wins over Jordan Wright and Lungiambula, but lost to Jun Yong Park, Jotko and Njokuani.

Barriault is talented, but Hernandez has been VERY impressive. The fact that he managed to submit one of the most accomplished BJJ athletes on the planet, Rodolfo Vieira, is a clear testament to how good he is. He also managed to submit Jun Yong Park who’s someone that Barriault has lost to. Hernandez certainly has a chance to finish Barriault, but he’s never been submitted before. Instead, I’d say that a decision is more likely.

Boser had a couple of rough decisions on the cards with the judges kind of screwing him against Ilir Latifi and Andrei Arlovski, but he came back with a finish against St. Preux in his last one.

Nascimento’s UFC journey has been a lot shorter, but has been just as interesting. He opened with a finish on the Contender Series and followed it up with a finish over Mayes. He was then brutally KO’d by Chris Daukaus and was then stripped of his win over Baudot due to PEDs.

They’ve both got great potential in the UFC, but Boser has clearly found more success against the tougher opponents. He’s reached close decisions with Latifi and Arlovski and finished OSP and a couple others. At heavyweight, there’s always a chance for Nascimento to grab a finish, but Boser is more likely to grab the highlight.

Pyfer may be making his UFC debut this weekend, but he’s already made a huge statement to UFC audiences. He grabbed his contract on the very first week of this season’s Contender Series after finishing Ozzy Diaz. It should also be said that he was beating Dustin Stoltzfus, a current UFC fighter, in his first Contender Series appearance but was then injured in a bizarre grappling sequence.

Amedovski found incredible success outside of the UFC with an 8-0 record and sensational finishes, but was finished very early in the 1st Round of BOTH of his last two fights.

This is one those matchups where they’re giving a Contender Series alum. an easier fight against someone who’s about to get cut. Pyfer has clear power and talent while Alen has lost all three of his UFC bouts. It seems exceedingly likely that Pyfer will grab a beautiful, early finish.

Fili has been around the UFC since 2013, but has struggled immensely in his last few bouts with 1-3 record and a No Contest in his last five. Although those were some tough losses, they were also against top contenders Yusuff, Mitchell and the dangerous Joanderson Brito.

Algeo is still early in his UFC journey with a 3-2 record. That being said, he dominated Herbert Burns in his last fight and managed to beat Joanderson Brito in a decision before that.

They’re both fairly evenly matched and this is certainly deserving of a spot on the main card, but Algeo holds the slight edge. Physically, they’re almost identical, this comes down to the fact that Algeo has been much more impressive in his recent fights. Brito finished Fili in 41 seconds while Algeo beat him in a decision. Already, that should tell you that Algeo holds the edge. Considering both men tend to end up in decisions, I’m predicting a convincing win from Algeo by decision.

Chidi is still in his rookie year, but he’s made a huge statement already, He notched TWO 1st Round KOs this year over Barriault and Todorović. Rodrigues also made an appearance on the Contender Series, but lost in the 1st Round to Jordan Williams. Since then though, he’s only lost once in a split decision to Armen Petrsoyan (that was questionable at best).

Rodrigues is a VERY dangerous and durable fighter, but Chidi has been on a tear. Rodrigues was finished in the 1st Round on the Contender Series and went to a decision with Todorović while Chidi grabbed finishes in his last 3 fights, including Todorović. With his edge in reach and most likely, power, he should be able to grab a finish.

In a matchup that’s sure to bring the excitement, title contender Sandhagen will try and defend his spot against the surging Song Yadong. After succumbing his first UFC loss to Sterling, he followed it up with two of the most spectacular KOs in bantamweight history. From there he went to a split decision against the current title challenger T.J. Dillashaw and decision against former champ Petr Yan. Song has been just as impressive recently, earning early finishes in his last two bouts after losing to Kyler Phillips and beating Casey Kenney in a split decision.

Song is a VERY talented young prospect, but Sandhagen is a clear top contender with a lot of 5 round experience against former champions… where he was winning those fights. It’ll be thrilling, but I have to give the edge to Sandhagen who may be grabbing another title shot off of this win.

Agapova is a fairly recent UFC addition, going 2-2 so far. In that time she’s submitted Hannah Cifers and Sabina Mazo, but was finished by both Shana Dobson and Maryna Moroz. On the other side, the submission artist, Robertson, although still very young, made her start on TUF back in 2017. Since then, almost all of her wins have come from submissions. She’s submitted Emily Whitmire, McCann, Cortney Casey and, most recently, Priscila Cachoeira.

Robertson has been struggling against the much larger and well-rounded fighters like Barber, Santos, Maverick and Aldrich, but has done VERY well in these kind of matchups. With Agapova already getting submitted by lesser grapplers, it seems likely that Robertson will be able to grab another finish here.

Here I highlight some betting lines that you might want to take advantage of for UFC Vegas 60. These are odds that favour the bettor. Although some of them may conflict with my picks, they offer a fair reward for a slight bit of risk.

Boser has been in some decisions, but you can’t forget that we’re still talking about the heavyweight division. These fights tend to be much shorter on average, especially when there’s a huge gap in experience level. At +105, there’s a lot of value in believing this fight will end in true heavyweight fashion: an early finish.

The Underdog Bill Algeo at +105

Both these guys are talented, but all of the momentum is in favour of Algeo. Fili is on a losing streak, Algeo is on a win-streak. Algeo beat Brito in a decision while Fili was finished in less than a minute. With all the momentum on Algeo’s side, it’d be silly not to capitalize on a +105 betting line.

The Underdog Denise Gomes at +171

This betting line is purely a reflection of UFC experience. The oddsmakers are saying that Loma will win this fight because she’s grabbed a couple of UFC wins. Sadly, that’s not the entire story. Gomes just won her fight on the Contender Series a few weeks ago and looked absolutely spectacular. She’s a WAY more well-rounded fighter than Loma who’s a pure striker. I’m not saying Gomes will dominate this fight, but she’s certainly got the more well-rounded toolset and the characteristics of a winning fighter.