Terminal City Thoughts: The state of fandom for the Vancouver Whitecaps 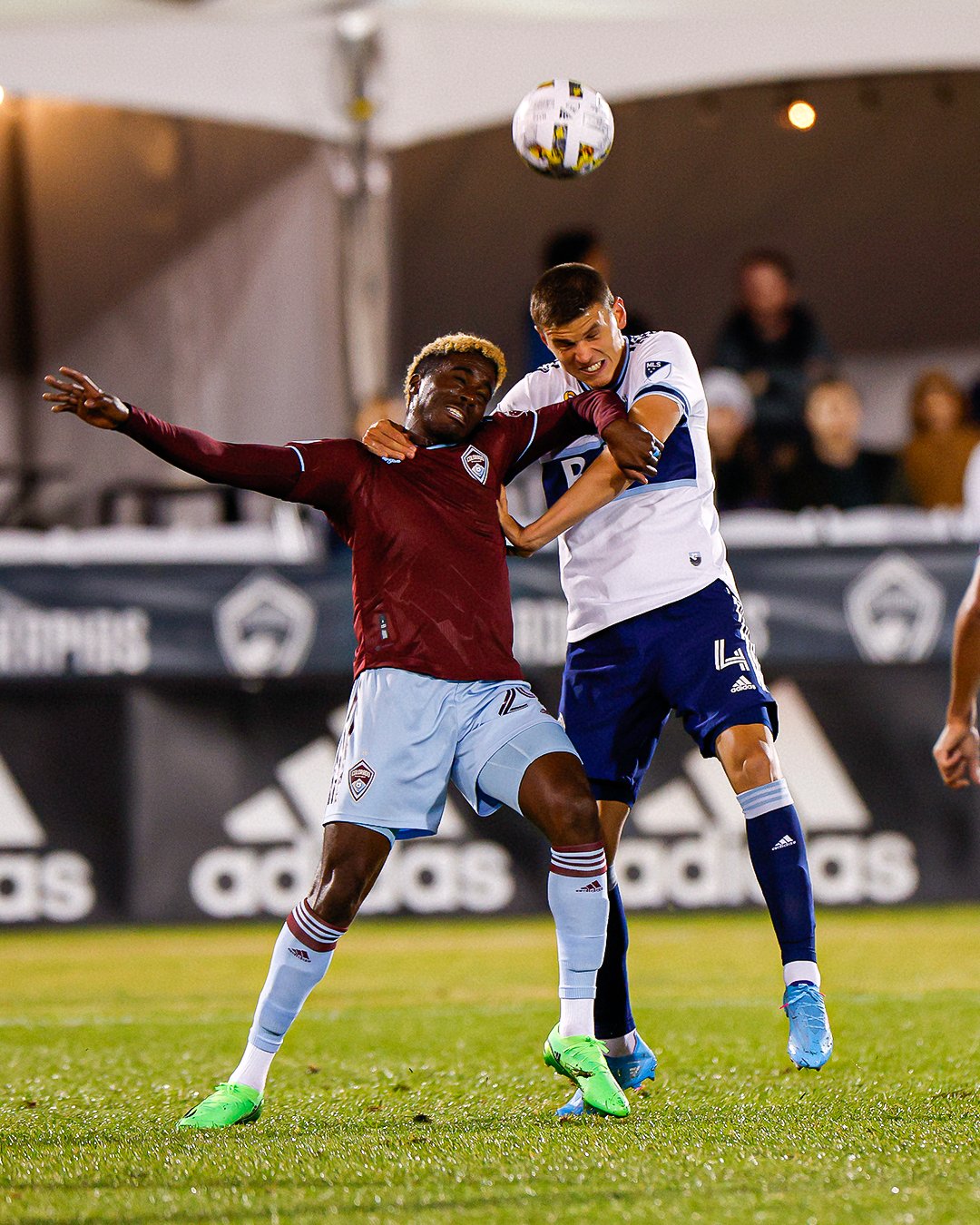 It is an odd time to be a fan of the Vancouver Whitecaps. There are several issues that have people wondering about the longevity and direction of the club.

Vancouver’s playoff hopes are all but done. While not mathematically eliminated yet, a loss of just one more game could be that final nail in the coffin.

There have been grumblings about the scouting and recruitment in the past and whether there is a true desire from the ownership to challenge for the top prizes in the league and other tournaments the Whitecaps play in.

And finally, there are scandals of sexual abuse that have plagued this club for years.

So, rather than a review of what has been going on in the Whitecaps world over the past week, I thought I would take a look at these burning questions of fans.

Let’s try to give some clarity to the question: Is there enough to still want to be a fan of the Vancouver Whitecaps?

The productivity on the pitch

After 30 matches this season, the Whitecaps are 9W-7D-14L and currently sitting in 12th place. That’s a precipitous drop from last year’s end of 12W-13D-9L, which was good enough for 6th place overall and a playoff spot in the Western Conference.

In 2021, head coach Vanni Sartini was in charge of much of that good fortune. Seven of the nine wins came under his tenure, and he recorded 26 points over 14 matches in the regular season of MLS.

In 2020, the Whitecaps finished a punctuated season of 23 games in 9th place with a 9W-0D-14L record. They improved for 2021, getting that playoff spot, but have fallen this year.

So, what happened this year?

Well, for one, the squad was inundated with injuries and health & safety protocols early in the season. At times, there were close to 10 players unavailable for selection during this time. And their record showed their struggles. In the first eight games of this season, Vancouver had a 1W-1D-6L record and was sitting last in the entire league.

However, the cancelled match against the Seattle Sounders (due to their commitments in the CONCACAF Champions League) gave the Whitecaps a much-needed period of recovery and rest. From the beginning of May to the beginning of July, the club went 6W-2D-2L and dug themselves out of the hole they had created and moved into playoff contention.

But since then, it’s been a struggle all over again. In the past 11 matches, there have only been two wins. And while there was a spattering of injuries, it has not been to the extent as the beginning of the season. Depth should have been enough to handle this situation, especially with the influx of new players in the summer transfer window.

Sartini has rigidly followed a 3-4-3 (really, a 3-4-1-2 or a 3-4-2-1, depending on other factors) formation for much of the season. This can produce exciting football so long as a club has the players to make it work.

But I would argue the players do not exist fully to make this work effectively.

There are two natural centre-backs on the squad that can fit into this. Ranko Veselinović is second in MLS on clearances. True, he can sometimes get skinned in the role he played, but more other than not, he is effective in quietly doing his defensive job. Veselinović is also second on the Whitecaps in pass completion, coming in at 86.1 per cent.

Tristan Blackmon also seems to slot well into this formation. Early in the season, he showed his prowess in killer passes. That has not been his role as of late with the introduction of Andrés Cubas, but we do know he has it in his locker.

And in fairness, Javain Brown has slotted in on the right side of the back 3. In terms of tackles and interceptions, he rates better than Blackmon.

But beyond that, it gets more difficult. Jake Nerwinski does well in some games, poor in others. Florian Jungwirth has the defensive intelligence, but no longer has the pace to effectively execute.

This means the Whitecaps can barely put together an effective back 3, and what they can put together, has no depth.

This is a long-winded way of saying the Whitecaps may not be equipped to play a back 3. They have given away 54 goals this season while only having an xGA of 43.5. Essentially, they have given up over 10 more goals than expected, which translates into a significant number of points dropped where they should not have been.

They are also not producing enough. The Whitecaps have 33 goals in 30 games so far, the worst goal production in the Western Conference and tied for second-worst in the league.

Lucas Cavallini leads the team in scoring with eight goals. He’s averaging just under a goal every two games. That’s not bad for a striker, but one would expect more from a DP striker. In comparison, Brian White, Vancouver’s leading goalscorer for the 2021 season, had 12 goals. He only joined in June of that year.

Add to the mix of playing with wingbacks in a squad that did not have any to begin the season (they picked up Julian Gressel in late July 2022), and you can see the problems: the Whitecaps have been trying to build into a system rather than playing a system that suited the players that already existed.

In other words, the tactics and formation that the coaching staff wanted (and which can be very effective) may not have suited the personnel available.

Recruiting: Moving in the right direction?

It is surprising to remember that before 2019, the Whitecaps did not really have a scouting department. Since then, they have created a director of player recruitment position and have added a number of scouts.

This predates both Schuster and Sartini, but they have had a hand in its direction. Schuster is the one who brought in Nikos Overheul as the head of recruiting in early 2021.

Under their direction, players like Ryan Gauld, Sebastian Berhalter, Marcus Godinho, Alessandro Schöpf, Julian Gressel, Blackmon, Cubas, and White have been brought in.

However, they have also lost players like Janio Bikel (who has since returned but barely played), Derek Cornelius and Ciao Alexandre to loans elsewhere. There have also been players such as Maxime Crépeau who forced permanent transfers away from the club.

But overall, recruitment has gotten better. Player recruitment is like gambling; you can go in knowing the game and understanding the risk, but still get burned.

Recruitment is also something that cannot be solved in a single transfer window. It can take years to get right.

I would argue that gains have been made here for the Whitecaps, even if it is only the fact that they have scouts now.

The scandals: What fans want and what the Whitecaps can deliver

The fact that the names of Bob Birarda and Hubert Busby Jr. are household names for Whitecaps fans will be forever a stain on the club and Canadian soccer in general. However, many Whitecaps fans are taking note of what is yet to happen at the club, namely the positions of the executives who were in charge during the employment of these two men.

The executives believed to be in question are Bob and Dan Lenarduzzi, Rachel Lewis and Greg Anderson, all of who were with the club during the 2010-2011 season. They are the ones believed to have been put on administrative leave as of October 29, 2021.

Since then, Lewis has left the club for a role in a different organization away from football.

But rumours are swirling as of late that the three may be returning back to the Whitecaps in some role.

Schuster, for his part, has stated repeatedly that the executives will not return to their previous role, but that does not discount a return in some other form.

The latest review of the club’s conduct into their handling of Birarda and Busby Jr. was conducted by Rubin Thomlinson LLP under the direction of MLS. In their findings, they state the Whitecaps “did not attempt to dismiss or ‘cover up’ the allegations, but rather, took them seriously, and actively ensured that the allegations were addressed, and involved the CSA where appropriate.”

However, it should be noted this review took serious issue with the initial investigations. The review attributes these concerns to the investigator in charge and not the club.

It should also be noted that this latest review only talked with a small sample of individuals: four current Whitecaps employees, one former employee and nine other individuals who had some measure of involvement.

Former players that were affected, whether as survivors or as witnesses, did not participate because they believed the review to be lacking independence.

There is a very vocal part of the Whitecaps’ fanbase that wants these three executives to be shown the door for their alleged involvement.

Many are also using their leverage as season ticket holders, stating that their renewal is dependent on the Whitecaps removing the former executives permanently.

The deadline for season ticket renewal is Sept. 15. As of writing this article, that is tomorrow.

But is this something the club has the power to do? The report stated in plain language there was no cover-up and accusations were taken seriously and were actively addressed based on recommendations at the time.

We can disagree with the recommendations. They were toothless.

The way I see it (and I am by no means a legal expert), the club’s hands are somewhat tied in what they can do.

The best solution is for the remaining executives to leave of their free will. It is the least messy option. It is also unlikely to happen.

The ‘next best’ option is for the Whitecaps to negotiate a buyout of some sort. Schuster has alluded several times to negotiations with the remaining executives, but that takes time. And fans have been demanding action for months.

The other option is these executives are brought back into the club in some capacity. Let’s try to not even entertain this as an option.

What is easily apparent is that the Whitecaps cannot simply terminate the contracts of these executives on their handling of Birarda and Busby Jr. If they did, it is likely these executives would have a strong legal case against the club, and this would continue to drag on for years.

A buyout is absolutely possible, but it will feel hollow to many fans because the executives will get some level of control over how they exit the club.

What is a fan to do?

Being a fan of any sports club can be viewed as a contentious relationship. It feels like you give the club a lot and get little in return.

Whitecaps’ fans must negotiate the product on the pitch and decide whether it will get better and be worth their continued support.

In addition, fans of this club have the added (and more important) issue of believing their club to be a worthy addition to the community in terms of how it conducts itself. Organizations are like people; they will get things wrong. But people will ask whether they are actively trying to conduct themselves in a good way and if they are willing to do what is right when they fail.

I wrote that I would try to give some clarity to the question. I was not going to answer it.

Everyone will have a different answer because this one is not easy. And likely, there are other issues, other areas of concern, that for some I have not addressed.

What is apparent is that the Whitecaps can do better in many areas, both on and off the pitch. Whether it will be enough is for each of you to decide.