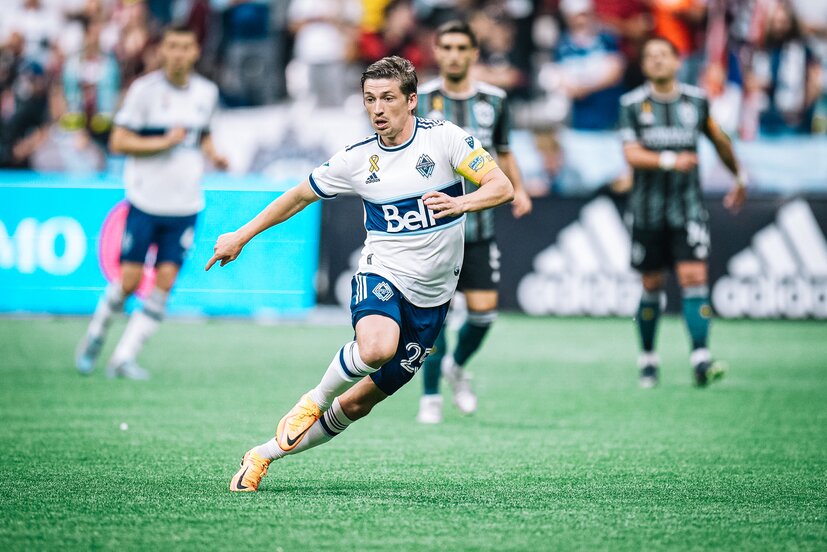 The Vancouver Whitecaps playoff hopes are still alive. It was a dull first half that made me want to take a nap but managed to stay awake thanks to the fans below the press box. But the second half was where the fun began.

Whitecaps head coach Vanni Sartini went back to the back four again. But this time, it was a 4-2-2-2. Desperate times call for desperate measures. The Christmas tree formation in Colorado didn’t work as they gave up three goals on five shots. If only the back four was a thing back in April or May when there was time left in the season. Anyway, the back four doesn’t guarantee a victory, it’s how the players do.

The big thing about the lineup was Luis Martins was making a rare start. It feels like he has barely played over the last few months and he came off the bench in the last game against Colorado Rapids. Godinho would have been a better choice, however.

Ryan Gauld was back in the Whitecaps lineup after serving his one-game suspension. He was on the left side as one of two wide midfielders. Ryan Raposo was the other. This was interesting. Raposo has been good this year and is very good at crosses and Gauld is an effective playmaker. It will be intriguing to see how the two of them work.

Brian White was upfront along with Pedro Vite. That is surprising. Vite has yet to score a goal for the Whitecaps and while is a creative player with a lot of potential, has been frustrating this year. Maybe Sartini was hoping this would light a spark in Vite? Vite’s decision-making has plagued him this year so he needs to improve.

Leonard Owusu was making a rare start alongside Andrés Cubas. He’s a guy I have always liked. He can be good defensively but at times isn’t. Which Owusu will we see today?

At the back, Thomas Hasal was back between the posts and Jake Nerwinski was in for Javain Brown. Nerwinski has struggled as a centre back but as a right-back, he isn’t that bad. Tristan Blackmon and Ranko Veselinović were starting alongside each other and frankly, they are the Whitecaps’ best defenders.

The game started with an odd moment.

LA was awarded a free kick near the Whitecaps box but Riqui Puig lost his boot and took his time tying it up. That didn’t do anything for the Galaxy as the free kick went into the hands of Thomas Hasal. Puig losing and tying his shoe caused the fans to start booing and Sartini was yelling and jumping on the touchline about it. That is an odd way to build up momentum and it failed miserably.

Puig tried to get on the score sheet was his shot from outside the box but it went wide right. It didn’t miss by much though. Early on, the Galaxy was dominating the possession. The Whitecaps were going to need all out on the counter-attack.

Martins was playing it safe early, perhaps too safe. Instead of passing forward, he kept passing backwards. If the Whitecaps wanted to counter LA’s possession, why not pass forward? He did eventually but the cross led to a corner.

The Whitecaps did start getting some good spells with the ball. However, there was that one pass that would mess things up. It was frustrating. The backwards passes and the passes that were given away so easily just killed the momentum.

The Whitecaps did not get a single-shot attempt until the 17th minute. Gauld, who loves to shoot outside the box shot it way wide of the right post. At least he tried right?

There was a bad clearing attempt by one of the Whitecaps defenders and then the ball was crossed for Javier “Chicharito” Hernandez but his header went high as he was being pressured by Blackmon. That was just a poor clearance attempt. It went straight to the Galaxy player.

Gauld then lead a beautiful build-up in the 25th minute. He danced around the Galaxy player, made a nice pass to White and made a good cross to White but his header was blocked just in time. From my angle, in the press box, it was going in. That was the best part of the game for the Whitecaps and they need Gauld to be the difference maker once again.

The chances started to come. Blackmon got ahold of the long throw-in in the box but his shot was too high. There was some stuff to be positive about at least. Well, so far.

Veselinović was coming up big. Just half an hour in, it felt like already had at least three or four clearances. The Serbian is quick to make defensive plays and is smart at doing them. So far, that’s what he was doing.

Blackmon was also playing well. He was going all out with the blocks. He and Veselinović were the two best players on the pitch in the first half. Both were doing a lot of the work, and they were doing it effectively.

The Whitecaps’ passes were poor. They were either given away easily or too long. The ball movement looked sloppy. It also isn’t a good thing when the centrebacks are the busiest and best players.

That was…a half. Neither team had a shot on target. That was some pretty dull football to watch.

The Galaxy had the first shot on target of the match courtesy of Victor Vazquez. Hasal had no trouble saving that one as it went straight at him.

It was Blackmon who got the Whitecaps first shot on target. But that went straight at Jonathan Bond. Copy and paste. Sort of.

It looked like the Galaxy scored off a corner in the 51st minute but Puig was offside. Chicharito was getting lots of cheers from the crowd. There were a lot of Mexicans in the crowd.

The Whitecaps continued to defend well. But like the first half, needed to be better on the counter.

Raposo tried his luck with a free kick in the 56th minute but it was off Bond’s fingertips.

But a goal came. Two corners later, Blackmon’s shot was saved by Bond but Gauld was there to pounce on the rebound. That shot by Blackmon was a good one and it troubled Bond and the Whitecaps made it hard for him to recover. After the last home game where they lost 3-0 to Nashville, it felt good to hear the roar of the BC Place crowd and Don Andrews announce the goal scorer.

Raposo almost made it two but his first touch failed him after receiving the pass from Vite. Raposo wasn’t great but he was fine. But after 63 minutes, he was subbed off for Julian Gressel. It looked like the Whitecaps wanted more and rightfully so.

It was another rough go for Vite. Today, he had a better work ethic but his passes and decision-making have been poor. It was good he was working hard but he needs to do it right.

But he made me eat my words.

The Whitecaps were quick on the counter and Martins’ cross missed White and Vite tapped in his first MLS goal. That was a perfect counter-attacking goal. That cross from Martins was very nice.

I’ve been hard on Vite but it was good to see him score. Vite started the counter and he finished it. Maybe this is the start of his turnaround. The Ecuadorian has potential and is only 20. We are seeing glimpses of what he might become.

The Whitecaps continued their good defending. They wasted no time clearing the ball and made good attempts blocking and creating turnovers.

The third goal came when sub, Gressel made a beautiful through ball to (super) sub, Tosaint Ricketts who made no mistake against Bond on the breakaway. We can call the Galaxy goalkeeper 003. (The goals weren’t entirely his fault though.

Maybe this is the style Sartini wants: A counter-attacking side. It works with the back four. It works with playmakers in Gauld and Gressel. However, you need a pacy striker. Ricketts despite being 34, has some pace to him.

With that, there was the dub for the Whitecaps. A much better second half gave them the victory as they played with a lot of intensity. Where was this the last month? Actually, where was this the whole season?

Sartini was pleased with the win and clean sheet. (He was also wearing a shirt of the supporters group and popular Twitter account Couch Ultras.)

“The clean sheet, I’m very happy, the defensive organization is key to win games,” he said. “About Pedro, I think he did well, it was a copy of the game in Colorado for the first 15 minutes, he looked slippy. After, he did pretty well.”

“When we play our brand of soccer, we are a fun team,” said Sartini.

Sartini also said the 4-2-2-2 could return against the Seattle Sounders on Saturday but will consider his options.

Jake Nerwinski said this win gave the team a big boost of confidence.

“To come back home and get a big win over a team who beat us badly at their home means a lot,” he said.

He also talked about the next game against Seattle.

“It’s gonna be like a playoff game, both teams are fighting for their lives,” said Nerwinski.

Gauld was happy with the clean sheet and the way they created chances.

“First half was a bit of a struggle, we defended quite deep but (in the second half) we created chances,” he said. “It’s been a while…I think we looked pretty good defensively, more compact.”

Ricketts has been the definition of a super sub this season. I’ve said recently that the Whitecaps need to look for a pacy striker in the winter but they can just clone Ricketts and de-age him to 24. Unfortunately, that isn’t possible.

There was a lot to pick so we’ll go with two.

Despite scoring three goals, the Whitecaps had an expected goals rate of 0.94. That is bizarre. For passing, they only completed 325 while LA Galaxy had 700. That is even more bizarre.

As mentioned the Whitecaps play the Sounders on Saturday. Kickoff is at 7:00 p.m. They have 37 points and are two behind Seattle and six behind Real Salt Lake for the final playoff spot.

The chances are still small but this team will fight to the end.