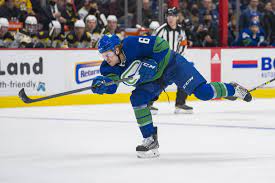 Can you feel it? Vancouver Canucks hockey is upon us.

The calendar has turned to September, Canucks Twitter is talking fantasy football and the weather is starting to get cooler. The season is coming and it will be here sooner than you think.

After a summer of speculation, signings and heatwaves, the Canucks YoungStars tournament begins September 14 with training camp beginning on the 24th.

A new season means new hope. The Canucks aren’t a Stanley Cup contender but there has been an improvement on the forward core. However, defence is still an issue.

But there are plenty of reasons why you should look forward to the Canucks season and I already wrote four reasons why.  As you can tell by the title, we are going to do some bold predictions for the season.

These are my hot takes. I’m not saying these will happen but it would be cool if they do

Brock Boeser has a ton to prove this year.

He signed a three-year deal in the offseason and Vancouver general manager Patrik Allvin made interesting comments on the Canucks core last week. He listed the Canucks core as Thatcher Demko, Quinn Hughes, Elias Pettersson, JT Miller and Bo Horvat. Allvin did not mention Boeser which raised some eyebrows.

Boeser himself has said he had a tough season last year.

“There’s times I’ve played well and lived up to those expectations and there’s times like last season where I’ve sucked and didn’t live up to expectations,” said Boeser on the Has-Beens podcast per Daniel Wagner of Vancouver is Awesome. “I put a lot of pressure on myself to perform and produce for our team and help our team win. Next season is definitely a season I’m looking forward to.”

I feel we are going to see a big year from Boeser. Last season, the criticisms and the hardship he has faced in his personal life in the past year will motivate him. 23 goals last season was decent for him but I have a feeling he will get 30 this year. How about more than 30? Maybe not over 35 so let’s go with 33 goals and 35 assists for Boeser this year.

If Boeser does have a big year, then it will be proven he is part of the core.

JT Miller got 99 points last season. That was impressive especially since that was the highest point total by a Canuck since Daniel Sedin got 104 in 2010-11.

Elias Pettersson got off to a slow start. But starting, things started to click for Pettersson as he had 51 points in 47 games. Before the new year, he had only 17 points in 34 games. Apparently, his wrist wasn’t 100% in the first half of the season so that explains a lot.

I don’t expect Miller to reach the 99-point mark again. However, I feel like he can have another big year. For Pettersson, the second half of last season was the real him. His wrist is fine now and this season we will see more of his big shots, great passes and underrated defensive game.

These two make a good one-two punch down the middle and will drive the offence this season.

Vasily Podkolzin came to Vancouver last season knowing not a lot of English and had to learn to play on North American ice. It’s safe to say last season, he took some big strides. Oh, and his English has improved and at this year’s training camp, might have improved even more.

As expected, it took time for him to get going. But when he got going, he was very noticeable on the ice. Podkolzin flourished on the forecheck, was scoring goals and even showing off some playmaking skills.

The young Russian has been named a breakout candidate by the NHL.Com fantasy staff. It’s hard not to see why. Podkolzin got more involved offensively last season and steadily improved in a bottom-six role. If he is given the top-six minutes, then we will see more points from him. Plus, having fellow countrymen Andrey Kuzmenko and Ilya Mikheyev helps.

If he does get top-six minutes, him scoring 20 isn’t outrageous as you think it is. Remember, he could be playing with the likes of Pettersson, Miller, Boeser and Mikheyev so that means a lot of offensive opportunities.

Let’s see if Podkolzin can avoid the sophomore slump.

4: Thatcher Demko will get a Vezina nomination

The San Diego native was consistently very good in net. He was making these unreal saves, (like the ones during the crazy sequence against the New York Rangers) and stealing games the Canucks had no business being in.

This is the second year of a five-year, five-million-dollar contract which looks like a steal. (Dare I say Thank you, Jim?) Demko is just his entering his prime at 26. (Turning 27 in December) What we saw last season, is Demko at his best but it looks like the best is still yet to come.

He is already one of the NHL’s top netminders and I see him getting a Vezina nomination. No, he won’t win it (My pick is Igor Shesterkin) but he will be arguably the best Canuck on the ice this season. I don’t think we have seen Demko’s final form yet.

Now imagine if he had a good defence in front of him.

5: The Canucks will face Edmonton in the first round, beat them, then go on a miracle run to win the Stanley Cup…OK this one is too bold

No, the Canucks aren’t winning the Stanley Cup this season. I would like them to but they aren’t good enough to win it.

But I’ll stick with the first one. The Canucks will make the playoffs as a wild card team and face the Edmonton Oilers, who will win the Pacific Division in round one. But Vancouver wins the series in a seven-game upset due to Jack Campbell coughing up the puck late in the third period. However, the Canucks lose in six to the Calgary Flames in round two.

Ah….hopium. I think I took too much of that darn drug. It is a helluva drug to take and if you are a Canucks fan, chances you have taken hopium.

For those wondering, “hopium” is a made-up word by the people of the internet. Urban Dictionary describes it as “the metaphorical substance that causes people to believe in a false hope.” I first saw the word on R/Titanfolk. That is a subreddit for the popular manga and anime Attack On Titan. On that subreddit, “hopium” has been taken by fans because they want to believe the ending of the anime which happens next year will be different than the manga ending. It was Game of Thrones ending level bad.

If Hughes manages to transition to the right side, great. However, that won’t solve the defensive problems.

Ok, the hopium has worn off and I was on it when I wrote this article. Again, I would love these bold predictions to be right but I don’t they will. But I see one or two of them becoming reality.

Also, I think Conor Garland will get 50 points and Kuzmenko will get 40. Hughes will get 80 points and win the Norris, Podkolzin will win the Hart, Luke Schenn will have more points than Cale Makar this season, Jason Dickinson will be a 30-goal scorer and…whoops. I think I may have taken too much hopium. I got to stop. (Only Garland getting 50 points and Kuzmenko getting 40 are reasonable but the rest are just jokes as you can tell)

As a Canucks fan, it is the hope that kills you. I got to stop using hopium, seriously.