Tri-City Americans: Roy Stasiuk on building a team and looking ahead 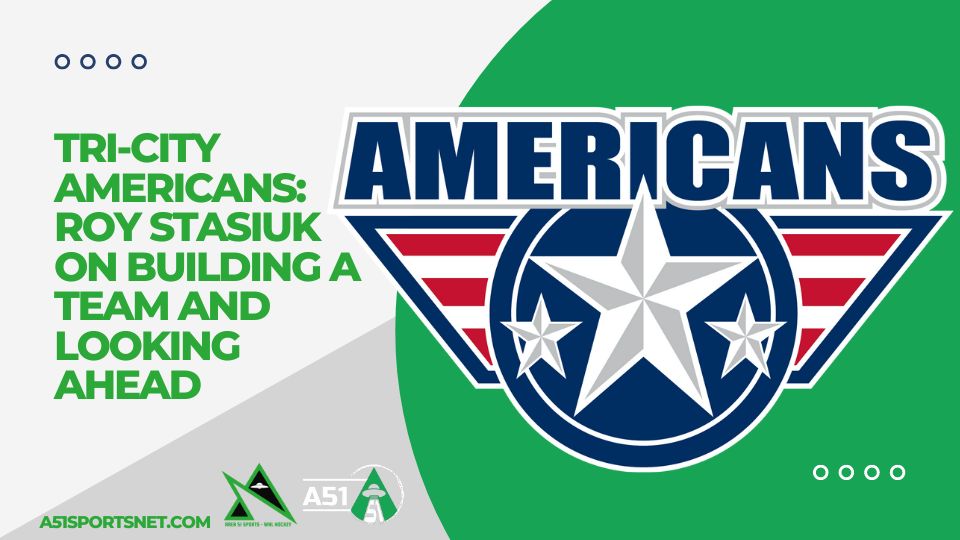 The Tri-City Americans held their rookie and training camps over the last week, and have a number of players to keep an eye on, and a new identity to drive them.

Americans head scout and assistant general manager Roy Stasiuk said that having all of the club’s prospects, invites, and veterans around at the same time for camp never gets old, though sometimes it’s bittersweet because not every guy at camp can find a place on the roster.

“We want to ensure that everybody comes and has a fun and safe environment to get a good evaluation opportunity. We achieved those goals, which makes me very happy. At the same time, I think we’re fair and honest with our athletes.”

Sometimes that fairness means that some of the younger players, who believe they are ready for the WHL at 15 or 16 years old, take to the ice with the team’s veterans and have an eye-opening experience. Stasiuk noted, “While they are going to be very good players, they also understand that it’s going to take some time and patience as well.”

Of course, before any player becomes part of the Tri-City Americans organization, the scouts search high and low for players that could be part of the team’s future.

“What I’ve always tried to work from is a team identity,” said Stasiuk. “Who we are and our core values are very important. We want our values as an organization and the individual’s values to coincide and match or correlate to our values.”

As for how Stasiuk and the team of scouts do this?

“We do some background checks, meet with players, and interview both players and parents prior to a draft or listing a player. A lot of prep work that goes into a training camp is finding players that, number one, have the ability and talent, but number two, also have the values that meet with our organization.”

After they find a player that they believe will be a good fit, they look to see if the player has an interest in even playing in the WHL or at least an interest in learning about the Americans and the league.

“Those are important things so that you’re not just sending out invites and hoping that kids show up. We’re really happy that everybody who said they were coming has attended camp.”

“I’m already projecting three, four years out, what type of player this player could be for us and what role he may play on our hockey team.”

As for the style of game they are looking for from future Americans players, Stasiuk pointed out that the game changes all the time, mentioning that five or six years ago, there was an emphasis on smaller players with a lot of speed at both the WHL and NHL levels, but that things are shifting again, with size being more of a factor but skating ability maintaining importance.

“I think there’s a real emphasis on hockey sense, or hockey IQ as we like to call it. You have to be able to think and process the game very quickly. Process situations.”

“I think the different energy is going to come from we’re more team-focused,” said Stasiuk on the Americans’ identity shift, going on to say that the players have bought in. The goal is always to catch the eyes of NHL teams, and team success is just what the Tri-City Americans know they need to do that.

“Having been a former NHL Scout, there’s a reason why you follow some teams,” said Stasiuk, who spent six seasons as a scout for the Toronto Maple Leafs. “They’re having team success. Those are the kinds of players you want. If everybody’s enjoying success, everybody’s going to enjoy notoriety as well.”

Goaltending: Making the first stop and being a solid team in net

With Nick Avakyan and Tomáš Suchánek returning to the Americans for the upcoming season, there are four netminders prepared to step up if they are needed. Per Stasiuk, each of them brings something a little bit different to the game, but the one thing they all have?

Winning records with their club teams.

“That’s really important for us and that’s the first time we’ve done it in a long time. It’s not that we’ve neglected goaltending, we just had some other areas that we had to address.”

With both Avakyan and Suchánek being rookies for the Americans last season, they are coming in with valuable experience and new confidence from the offseason.

“For Tomáš, after the summer he had with the Czechia team at the World Juniors, that was a big summer and a big event for him, giving him some exposure, and definitely some confidence. Nick has worked really hard in the offseason. He understands he’s the backup goaltender right now and he’s embraced the role, but at the same time, he’s ready to go if he has to start. That’s important too, where he’s a good teammate. He’s a positive guy to have around. That’s what you need in your backup, you need some support, but at the same time, he pushes Tomáš as well, so it’s a really good fit. Overall, with our goaltending, we’re really happy.”

However, don’t read that and think that there isn’t any competition in net. Goaltending is always a position to keep an eye on, because anybody can win that starting role at any point throughout the season. That competition from within, Stasiuk noted, “It’s like water, they’ll find their own level.”

Defense: A bigger defense that is mobile, can move the puck, and is physical

Speaking of a bigger defense, the second-overall selection in the 2022 WHL Bantam draft, Jackson Smith made his first appearance at camp for the Tri-City Americans and Stasiuk has liked what he’s seen from the 15-year-old. At 6-foot-3, Stasiuk noted that Smith’s edge control with is skates is incredible, but that what stands out most is his compete level.

“He can walk the blue line with the puck, he has a lot of confidence, he can move the puck up ice and because he’s so big, he covers a lot of ice in a short period of time. So he’s an imposing figure, he’s got a little bit of bite to his game as well. He’s got some aggressiveness.”

However, Smith is not the only recent Americans draft pick of note at the blue line. 2021 third-round selection Merrek Arpin is another big body on defense, but Stasiuk praises his mobility and hockey IQ, saying he’s going to pick up on things very quickly.

“Sometimes we’ve got to remember he’s only 16. I mean, he looks like a young man, but he’s 16 years old. He’s got to get stronger, but his ability to see the ice, move the puck quickly, and his skating ability is going to really help out.”

Another positive in Arpin’s arsenal is that he is a right-handed shot, something that Stasiuk commented is like gold in the NHL. Though the list goes on, as Stasiuk also described Arpin as a good character kid who has a high ceiling and skill set, even if he has room to improve.

Both young defensemen have a leader to look to with the Americans, as Marc Lajoie takes over as the team’s captain for the season.

Stasiuk also mentioned to keep an eye on 2023 draft-eligible Lukas Dragicevic, who skates well and is a dynamic player on defense as well as prospect Kainoah Brankovic.

Forwards: Processes the game quickly and can handle the puck well

As for the returning forwards to watch this season, Stasiuk had three quick names to offer up.

“I think Deagan McMillan is going to surprise a lot of people, along with Jake Sloan who was overlooked in last year’s draft. Elouann Lemonnier, I think you’re gonna see bigger things from him, a year out of Texas. It’s a big step coming from Dallas minor hockey to the Western Hockey League, so he’s going to be a much better player.”

There are a handful of freshly signed players ready to make their names known in the WHL, but they’re going to have some competition of their own coming up as there are plenty of young forwards impressing Stasiuk and the Tri-City Americans staff.

Along with his positive notes on Cash Koch, Stasiuk noted that prospect Savin Virk is an exciting player to watch.

Another camp signing, Nick Anisimovicz, as well as prospect Gavin Garland, Stasiuk noted are going to head back and play another year of junior or minor hockey, but are two to watch for to in the future.

You can’t forget about the Tri-City Americans’ 2021 WHL Bantam draft second-overall selection Jordan Gavin. Seeing nine games with the Americans, picking up a goal and an assist, Gavin has had a taste of what the WHL has to offer and he has plenty to offer the WHL.

According to Stasiuk, “[Gavin] thinks the game very quickly and makes his linemates better because he can find open spots on the ice where he can delay a little bit draw some attention to him and allows for his linemates to get open.”

Exactly what the Tri-City Americans want to see moving forward.

“When I speak about turning a page and turning a corner, I’m really excited about what’s coming. We’ve had a chance to really dictate what we want to look like and who we want to be. We’ve got new seats in the building. I think it’s an exciting time. Hockey’s taking off a little bit. We’ve had a bit of a setback with COVID, but there’s a reason to come to the rink.”

“We want to be a community landmark. When people talk about Tri-Cities or talk about Kennewick, Richland, or Pasco, they go, ‘Oh, yeah, the Americans play there.’ We want to be recognized as that landmark for our community. I think we have a good chance too, starting with Tomáš’s success this summer, we got a load of free advertising, both on the NHL network and in Canada. So that’s a great start for our recruiting, but at the same time for our fans. We want the people in this area to be proud and take pride not only in their community but also show we can compete with bigger centers and be a good team.”