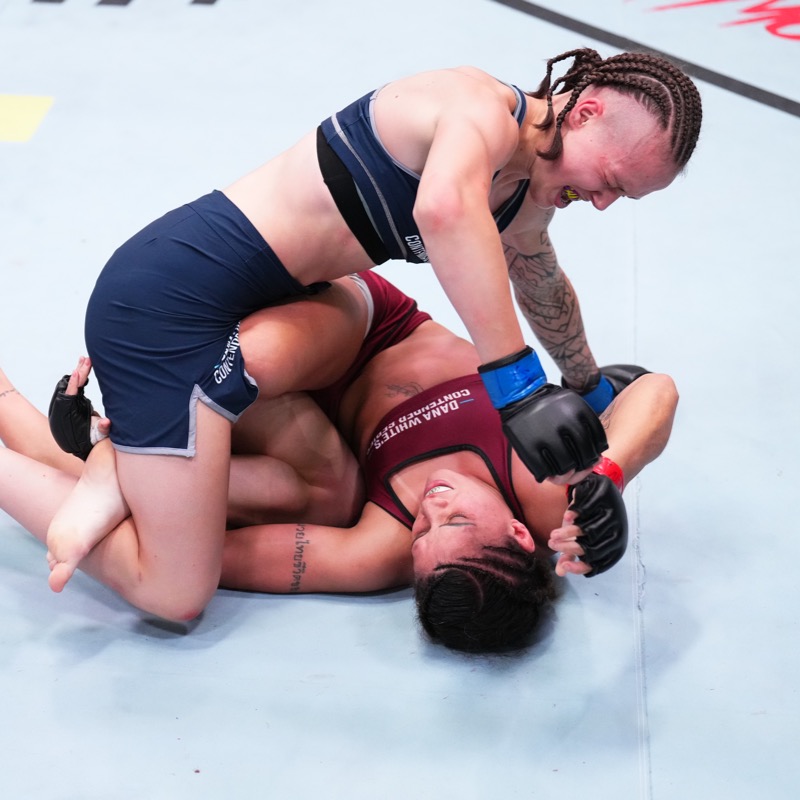 For the second time in UFC Contender Series history, two siblings fought on the same card. While Ismael Bonfim did enough over 3 rounds to grab the win, his brother, Gabriel Bonfim, managed to submit his opponent in the 1st Round. Regardless of how they won, they both managed to grab contracts.

Other UFC contract winners include Vitor Petrino who grabbed his second finish over Bellato, as well as Karl Williams who dominated his opponent in a decision. Sadly, Tereza Bledá wasn’t quite as impressive and didn’t get a UFC contract to go with her win. All the fights, along with the BLÜ’s Power Rankings for the night, are described below.

The ladies let the leather fly early with some wild shots from both sides. Neither woman landed anything crazy, but Bledá was the one who used that position to take the fight to the canvas. She was on top at first, but quickly reversed by Maia. Then it was Bledá who stole top position and started to work for some offence. Maia was doing well to defend against anything significant, but Bledá was in very clear control, occasionally landing some punches and elbows. Constantly looking for a submission, it looked like Maia finally got one, but was quickly shaken off by Bledá who had likely taken the opening round on the cards.

Bledá opened the next round with some decent strikes, but Maia took her down. Interestingly, Maia stood up and let Bledá return to her feet. I have to say though, neither one of these women has the greatest striking, Bledá was just using her jab thanks to her extra length. Then it was Bledá that grabbed another takedown, utilizing her ground and pound much more effectively this round. With the rest of the round spent in that position, Bledá was likely up 2-0.

The final round opened with another striking exchange, leading into a takedown attempt from Maia. Sadly for her, Bledá shut that down and grabbed another takedown, smothering her once again. After a few minutes of ground control, Maia threatened a submission, but was shut down quite easily. Bledá turned up the offence for the rest of the fight, trying to grab a finish for the contract, but couldn’t quite do it. Even though she didn’t grab the finish, it was a dominant, dominant win.

Even though Cormier and I have been wrong about how many contracts are getting handed out, I have to agree with him once again: I’m not sure if I was impressed enough to hand out the contract. That being said, it was a dominant win over an undefeated fighter and she’s likely get a chance in the UFC.

They started off slow but quickly turned up the heat as both mend started to land some crisp strikes. Both men started to land some HEAVY combos with Bonfim landing more shots and Abbasov walking forward. After some even exchanges, it was Bonfim that grabbed the momentum, stunning Abbasov with BOMBS. It looked as though Bonfim was going to grab the early finish, but somehow Abbasov was still fighting back and even landing some shots of his own. He managed to recover, but he was still getting tagged by a relentless Bonfim. Bonfim was hit by a couple of decent shots in the exchanges, but he ended the round strong and clearly took the round on the cards.

Bonfim was more patient in the 2nd Round, allowing Abbasov to get some offence going. As the round went on, he picked his shots, usually on a counter, to stumble Abbasov here and there. He wasn’t landing with the same finishing intent as the 1st Round, but he was still WAY ahead, clearly damaging Abbasov with his jabs.

Abbasov opened up hard the final round, knowing he needed a finish. Bonfim was still in the driver’s seat though, pressuring forward, picking him apart with jabs. Abbasov still never slowed down, but has having a really hard time hitting the very evasive Bonfim. Bonfim closed with a quick takedown, but it didn’t matter, he had already locked up his dominant decision win. The judges agreed, scoring it 30-27, 30-27 and 29-28 for the first Bonfim brother of the night.

Williams was the one making the first moves, stumbling Lawson with a couple of big strikes. From there, somewhat unbelievably, Williams took down the former college wrestler and started to smother him. Lawson threatened a heel hook, but stopped after getting slammed by ground and pound. After a couple minutes, Lawson got back up… but was actually dragged back down AGAIN by Williams. Lawson couldn’t do anything at all; he was just getting smothered by the grappling of Williams.

Williams opened the 2nd Round with a lot of kicks, trying to slow Lawson down and keep him at a distance. At this point it looked as though Lawson was already starting to slow down. Williams used that to take Lawson down once again. He ended up taking Lawson’s back, dominating him on the ground. Sadly, he then made a mistake, allowing Lawson to grab the dominant position. That didn’t last too long though. Lawson went for a heel hook again, but was shut down and dominated for the rest of the round, clearly down 0-2.

The 3rd Round started off SLOW with neither man making any kind of move for the first minute. Then the action exploded as Williams dropped Lawson and ended up taking the fight to the canvas. All he needed from there was to just ride out the rest of the fight and grab a decision win. Lawson tried a couple of last-ditch submissions, but clearly wasn’t even close to getting anything. With that, Williams had cruised to a 30-27 on all the judges’ cards.

Coming in on short notice, moving from light heavyweight up to heavyweight and dominating a wrestler with his own grappling, Williams was VERY impressive. The UFC needs talented fighters at light heavyweight; this was a no-brainer for a contract.

Gabriel Bonfim def. Trey Waters by Submission in the 1st Round

Bonfim opened the action early with some HUGE shots. Waters was responding well with some counters, but was still getting hit by most of Bonfim’s strikes, especially his jab and his kicks. After a couple minutes, the pace slowed down quite a bit and Waters started to land more his own shots. Bonfim was still dangerous though, stunning Waters with some clean shots. After some beautiful strikes, Bonfim went for a takedown, slamming Waters into the canvas. It looked like that could have been a grave mistake as Bonfim got caught in a deep guillotine. Just as it looked like he was going to barely get out of the submission… his opponent was the one that tapped! What most of us didn’t see was Bonfim slipping his arm around the neck of Waters, locking in a Von Flue choke.

Bonfim didn’t really get to show a lot of his skills, but what we saw was CLEAN. He did extremely well on the feet against a tall, dangerous striker, then managed to somehow grab a submission win while caught in a submission. Not only that, it was the FIRST Von Flue choke in Contender Series history. This is one welterweight that could easily compete in the UFC right NOW.

Vitor Petrino def. Rodolfo Bellato by KO in the 2nd Round

The MUCH bigger Petrino opened the offence early, lighting Bellato up with BOMBS. Bellato responded with a takedown attempt, but was shut down and actually reversed by Petrino. Bellato tried to grab a submission from his back but was BRUTALLY slammed into the canvas. From there, Petrino landed a couple of big shots from top position, then stood back up, trying to go back to striking. Petrino then continued his onslaught, lighting him up with these big shots. Then, out of absolutely nowhere, Bellato landed a BOMB that stumbled Petrino back. Bellato used that position to take Petrino down, but was then reversed. Petrino may have gotten clipped by that one shot, but with all the other offence, he clearly won the round on the cards.

Petrino opened with some more sensational striking, but was pushed into the fence by Bellato. After getting off the fence, Petrino slowed down his pace, but was still landing the bigger, more precise shots. Just as I typed that out, Petrino landed the biggest shot of the night, turning Bellato stiff as a board with his back on the canvas.

Petrino may have already beaten Bellato before, but this was still a close fight between two talented young prospects. He was elusive (except for that one punch) and dominated both on the ground and on the feet. Similar to Williams, the UFC needs light heavyweights and this guy looks DANGEROUS. Another CLEAR contract and I can’t wait to see his first fight.

After handing out 14 of 15 contracts in the last 3 weeks, it seemed time for UFC president Dana White to get a little conservative with the contracts. He mentioned that Bledá was a huge favourite… but didn’t quite look like it. She should’ve been able to grab a finish, but didn’t really do a whole lot. As a result, White said she needed a bit more experience.

He wasn’t stingy with the rest of the fighters though, giving out four contracts, including the Bonfim brothers. White was very impressed with the brothers, but wasn’t sure at first about Williams. He said the fight wasn’t great, but he was just as impressed as I was with Williams coming in on short notice, at heavyweight, as an underdog and dominantly beating an impressive prospect. Finally, White seemed the most impressed, as I was, with an absolute monster in Petrino. He said he’s a beast and wants to see what he’ll do in the UFC.