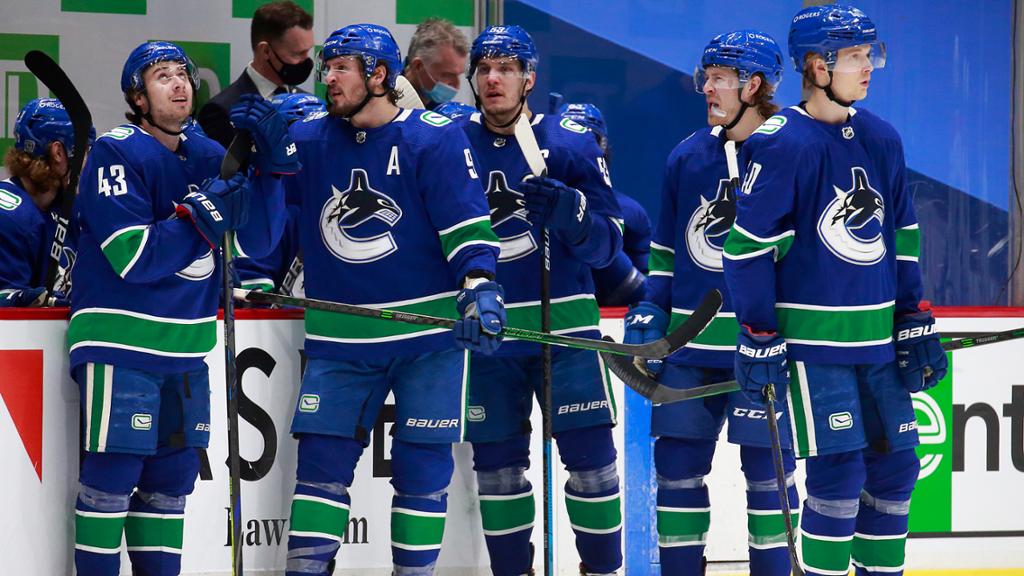 The Vancouver Canucks start their season soon and fall is right around the corner. Fall is a great time for sports. The Canucks and NHL season begins MLS playoffs, CFL playoffs, baseball playoffs and of course, the start of the NFL. So goodbye and good riddance to the heat.

Oh yeah, this is Avid Thoughts. Remember this? This was supposed to be a once-a-week column where I write about the Canucks and other things happening in the world of sports. Well, you are likely saying what happened to it this summer?

I’ll answer that question. Things got busy. I got a new job and prior to that, The Canuck Way was my priority as they wanted me to put out as much content as possible. Well, to the delight of Sean Warren and the rest of the Area 51 crew, I have quit TCW and will dedicate most, if not all my spare time to Area 51 as most of you probably know.

So as well as my Whitecaps coverage, I’ll be writing some Canucks stuff just like I did with TCW as well. That also means more Avid Thoughts, hopefully. I’ll try to do these once a week just as before but no promises.

Expectations for the Canucks

The Vancouver Canucks offseason did not go the way many fans intended.

While they did upgrade the forward core, the defence is still the same and JT Miller is still a Canuck. Oh yeah, he signed a seven-year extension much to the chagrin of some Canucks fans.

So the Canucks get to keep their 99-point man.

The Canucks are not contenders, yet. But are they playoff contenders? Sure. I think they can make the playoffs this year especially thanks to their upgraded forward core. Of course, there is Thatcher Demko. He’s only going to get better, especially with Ian Clark mentoring him. He has four years left on his deal and they have to become a contender in that window.

Re-signing Miller shows that they are pushing their feet on the gas and want to be a contender soon. Canucks President of Hockey Operations Jim Rutherford has said it would take two to three years for that to happen.

I expect the Canucks to be fighting for a playoff spot all season. Could they win a round? I’m not so sure. Talk to me if they make it and we’ll see. By the end of the season, the Canucks should have taken a step forward. That means they might have made some noise in the playoffs which is what management and ownership and of course, the players want.

The defence and the injury luck will be the things that will likely prevent the Canucks from being a playoff team. It will be a disaster if they don’t make it.

They also can’t get off to a start like they did last season. As good as they were under Bruce Boudreau, that bad start was tough to overcome.

Basically, the Canucks have to make the playoffs and win at least one round so it can lay out the foundation towards contention. But that is tough when you are capped out and don’t have much in the prospect pipeline.

There is hope with the Canucks, unlike the Vancouver Whitecaps.

After a disappointing 2-0 defeat at the hands of the San Jose Earthquakes, who by the way are among the worst in MLS, the playoffs hopes look bleak for the Whitecaps. It’s very disappointing, to say the least. After winning the Canadian Championship, I had hoped they would use that victory to go on a run like they did last season. If they did, we would have been talking about potential playoff matchups and they could have been fighting for the right to host a playoff game at BC Place.

But enough coulda, woulda, shoulda. There are many reasons why the Whitecaps are in this position. Bad starts, bad defending, lack of scoring and service, injuries, you name it. They simply weren’t good enough this year.

So it’s time to look ahead to 2023. It’s going to be a busy year for the Whitecaps. For the first time since 2016, they will be playing in the CONCACAF Champions League. Like its European equivalent, it is a tournament where teams all over North America compete to be the biggest in the continent. The Seattle Sounders were the first MLS team to win the CCL this year.

The Whitecaps will be competing with other MLS teams, teams from Mexico, Central America and the Caribbean. The tournament begins in February (a few weeks before the MLS season begins) and runs till late April or early May.

The Whitecaps will have a busy schedule with the CCL, MLS and the task of defending the Voyageurs Cup.

But there are many questions surrounding the club as their season winds to a close. Will Vanni Sartini stay as head coach? This was his first year as a head coach and will the Voyageurs Cup be enough to save his job? If they do can him, who will they replace him with? It has to be an experienced head coach.

What about the players? Will Lucas Cavallini’s option for next year be exercised? Or will they let him go and open up a Designated Player spot? They could use that spot to find a striker that has speed. Will they bring in a proven goalkeeper for next year? Thomas Hasal and Cody Cropper haven’t been bad at all but the Whitecaps are not getting the big saves from them as they did from Maxime Crépeau.

Who else leaves the team? It surely won’t be Russell Teibert.

We also can’t forget the ongoing investigation into the sexual assault scandal involving Bob Birarda and Huburt Busby Jr. Will the executives that were placed on leave last fall be allowed back? Whitecaps CEO and Sporting Director Axel Schuster has said the club is still making a decision.

Not only has the on-field play lost many supporters, but the off-field stuff also has. If the wrong decision is made on the executives, we could see many season ticket holders not renew. So it is up to Schuster and the club to make the right one.

The Whitecaps have a good foundation with Ryan Gauld, Andrés Cubas, Alessandro Schöpf and Julian Gressel. Gauld, Cubas and Schöpf were among the best in their leagues in certain statistical categories as their teams got relegated. Gressel was playing on a bad DC United team and is one of the best wingbacks and playmakers in MLS.

So, to Schuster and the recruitment staff’s credit, they have found hidden gems. Can they continue to find more this winter? We shall see.

Chelsea played in their first match of the UEFA Champions League on Tuesday against Croatian Champions Dynamo Zagreb. They should have won this one right? Nope.

They lost 1-0 to Dynamo Zagreb. No, this wasn’t the FIFA special where they had many shots and couldn’t score and the opponent scored with their only shot, they were bad.

The defending on Zagreb’s goal was horrible. They just let Mislav Oršić run. It was Canucks level bad defending especially Kalidou Koulibaly. He has the strength to stop Oršić but didn’t use it.

As for the attack, toothless as ever. My God, I want to tear my hair out watching this attack. This club went from Didier Drogba and Frank Lampard always banging goals to pass, pass, pass, pass, screw up in the final third. The final third: Something Chelsea and the Whitecaps have in common.

Raheem Sterling did not look good. Pierre-Emerick Aubameyang who was making his Chelsea debut got no service. Mason Mount? Still missing. Put his face on a milk carton. Kai Havertz was also nowhere to be seen.

This club can’t get the final pass or final touch in the box right. When they do, they miss the net.

Thomas Tuchel is on thin ice. If Chelsea keep playing like this, he is gone by Christmas. His tactics have gotten boring. Yes, the players are to blame but so is the manager. He needs to adapt. Tuchel has started by getting rid of three at the back by going with four at the back.

However, the system is very defensive. The possession is great but what is the good of it if you can’t score. There is no creativity. It is just endless passing around and moving in a diamond. Rival fans call Tuchel “Tucheliban” because they call his defensive-style “terrorism ball.” It has become stale and painful to watch.

I also feels like there is a mentality problem at the club. Do the players not trust Tuchel anymore? Is there no chemistry? Well, there are a lot of new faces so that could be part of the reason. I’m not sure what it is but they drop like flies every time they concede nowadays.

Jose Mourinho has said there is a mentality problem at Chelsea, so have Antonio Conte, Maurizio Sarri, Lampard and now Tuchel is frustrated with the team’s mentality.

The club spend over 300 million dollars on new players this summer, many were defenders. Many players also left the club but there are a few who have been reportedly been unhappy at Chelsea and are still there. They are Christian Pulisic and Hakim Ziyech.

Ziyech got subbed on in Zagreb and he looked terrible. He couldn’t make an accurate pass, turned the ball over and sent his free kicks into the wall. Ziyech is a creator but he wasn’t creating anything. It was a disaster of a day for him.

I don’t like how Tuchel has treated Pulisic. Sure, he has got consistency and injury issues but he has got talent. Tuchel barely plays him and he reportedly wants to leave Chelsea (like Ziyech) because of it. If Tuchel isn’t going to play him, why didn’t they let Pulisic and Ziyech go?

It is not good having unhappy players at the club, look no further than Romelu Lukaku last season.

There is still lots of time left in the season, but Chelsea needs to figure it out. Otherwise, it will be a long season.

Speaking of the Bills, they seem like the Super Bowl favourites. Frankly, I would be happy if they won it, especially for their fans. I never hated them. To me, there is kind of the like the Canucks of the NFL.

I think it will be the Bills against the Tampa Bay Buccaneers in the Super Bowl. (Can’t count out Tom Brady.) Josh Allen is poised for a big year. Von Miller makes their pass rush even better too.

Other teams to watch for me are the San Francisco 49ers, (I’m a big believer in Trey Lance) LA Chargers, (Justin Herbert looks to take a step forward) Las Vegas Raiders and Baltimore Ravens (Lamar Jackson now has help in terms of running and blocks and defence.)

It should be a fun and wild NFL season.