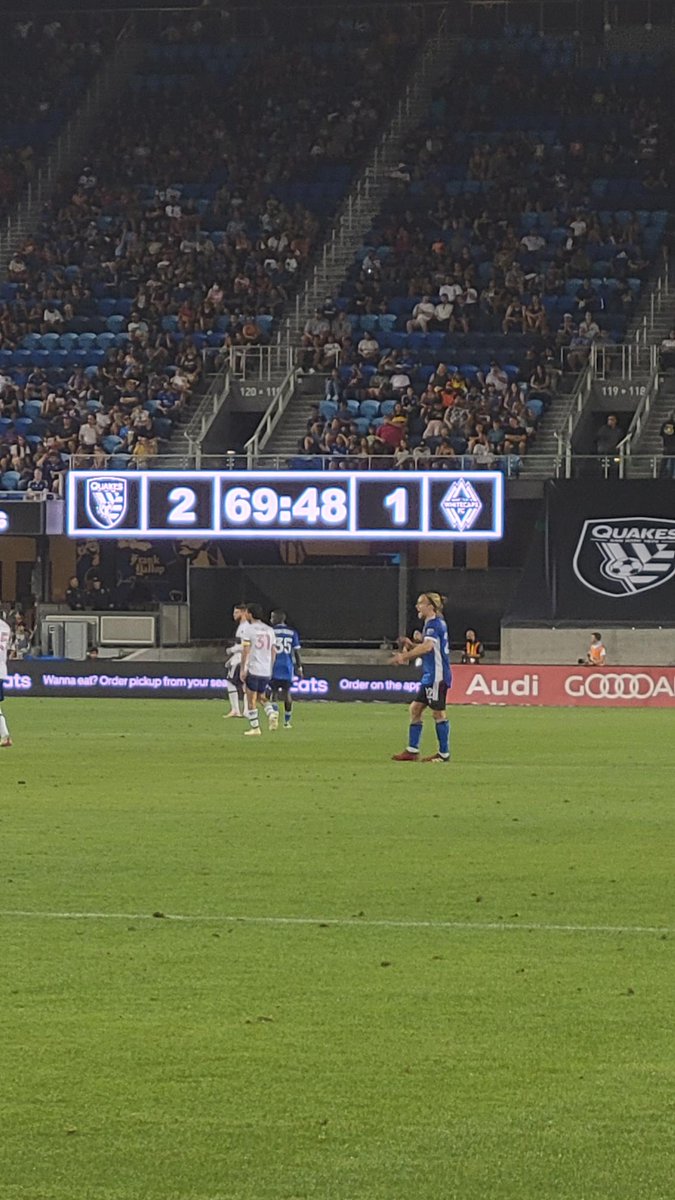 The Vancouver Whitecaps playoff hopes are like the Titanic right now.

The Whitecaps hit the iceberg early in the season and right now their playoff hopes are sinking faster than ever. It feels like it is only a matter of time before they are mathematically eliminated. There is still time but it was another missed opportunity as they lost 2-0 to the San Jose Earthquakes at PayPal Park.

Unfortunately, the back three stays much to my dismay.

Whitecaps head coach Vanni Sartini decided to switch to the 3-5-2 from a 3-4-2-1. With Lucas Cavallini suspended, (still unknown for how long) Brian White and Ryan Gauld were starting up front. The time is now if they want to get the chemistry from last season going again.

Thomas Hasal got the nod between the pipes and Andrés Cubas was the lone defensive midfielder. For the most part, he has settled in well since he joined the Whitecaps last spring. This was a surprise to see him start because he played 90 minutes for Paraguay against Mexico in Atlanta.

It was eyebrow-raising to see Russell Teibert higher up the pitch with Alessandro Schöpf. Schöpf can deliver the ball forward for scoring chances. Teibert…not so much.

Julian Gressel and Cristian Dájome were the wingbacks. Dájome has had a tough season and isn’t the creative scoring winger that he was last season. Part of the reason is that he is simply not a wingback, he’s a winger. But if the Whitecaps want playoffs this year, Dájome has to bring it despite playing not in his natural position. He and Gressel do make the Whitecaps strong on the flanks.

Tristan Blackmon, Ranko Veselinović and Javain Brown make the best Whitecaps back three on paper. No complaints about the backline.

Ideally, this formation works with two natural strikers but as mentioned Cavallini is not available. Tosaint Ricketts is on the bench for example. However, this could also allow Gauld to get more scoring chances and offer more creativity.

Not a bad lineup. Sartini is clearly in all-or-nothing mode.

Another tough start for the Whitecaps. Just four minutes in, the Earthquakes struck first.

18-year-old Earthquakes winger Cade Cowell dribbled around Brown and made him look like a fidget spinner. His ball found Jackson Yueill and his neat one-touch pass found Jeremy Ebobiosse who got his 15th goal of the season beating Hasal. It’s simply unacceptable that Vancouver has such poor starts. This one has to be the earliest goal they have given up this season, but I think I’m wrong on this one.

Time to up the intensity.

San Jose almost got two as Cristian Espinoza got around Veselinović and his pass found Yueill but the ball went wide of the right post. The defenders looked like a bunch of chickens without heads running in the early stages of the game.

The Whitecaps almost took over a San Jose turnover in the box as their pressure managed to get the ball to Schöpf but his pass was just out of the reach of Gauld. There was some intensity but more was needed.

The press was starting to materialize as Cubas and Schöpf were creating turnovers. A lot of the press was happening near the box.

Just over 20 minutes in, the Whitecaps had four corners. The equalizer almost happened as Gressel’s corner found the head of Veselinović but JT Marcinkowski managed to grab it. (He almost fell back into the net, and that would have made the highlight reels for the wrong reasons if he did.)

To the Whitecaps’ credit, they’ve woken up but the final touch and pass were hurting them. It’s groundhog day,

But San Jose got their second goal. The Earthquakes were on the counter and Espinoza’s pass found Jamiro Monteiro in the box. Monteiro’s left-footed shot then found the back of the net. The Earthquakes were making the Whitecaps back three look silly. Blackmon left Monteiro wide open and Brown and Veselinović were nowhere to be seen.

Gauld was clearly frustrated. He was giving his 110% but got a yellow card on a tackle which stopped a San Jose counterattack. Gauld will be suspended next game. Ugh.

Other than some glimpses of pressure and intensity, it looked like the Whitecaps were playing like their season was already over. There was hardly any engagement and drive in them. Fortunately, another half was remaining.

The second half began with the Whitecaps trying to find a spark but they couldn’t find space to get a good chance. It is a tale as old as time. But there were some good passes on the build-up

Sartini decided to go for more speed and creativity by putting on Pedro Vite for Dájome. It was another tough outing for the Dájome and Vite did look good in the last game against Nashville.

The Earthquakes were playing keep away with the ball. Why not? They were up 2-0. However, the Whitecaps were managing to get some possession.

The chance came in the 57th minute. There was another bad Earthquake turnover in their own end and Vite’s ball found White…but it went wide. He has to finish that. That would have been huge. Instead, we had to watch a missed sitter. White looks like a shell of his last season’s self with that miss.

Gauld then tried a shot from outside the box but that was just wide of the left post. Desperate times call for desperate measures as the old saying goes.

San Jose was looking very unorganized in the box, especially on corners. After one in the 66th minute, Gressel tried a hard shot but Marcinkowsi came out to challenge.

It looked like the Whitecaps got on the board on the next corner as Blackmon beat Marcinkowski. However, he was offside. See, this is why offsides shouldn’t apply in the 18-yard-box. It just looks silly being offside on a corner kick.

There was almost another blunder by the Whitecaps as Veselinović got caught and Ebobisse was on a breakaway. However, Blackmon came back just in time to prevent the hole from being dug deeper.

The Whitecaps were trying for a goal. There was one chance where Gressel was stopped by Marcinkowski after a lot of passes in the box. Sometimes, it is better to shoot the thing. They were spending lots of time in the Earthquakes half which is good. It’s also good that they were getting chances but it is bad that they were still down 2-0.

It feels like all the shots Vancouver got in this game were either straight at Marcinkowski or missed the net completely. *Insert facepalm GIF here*

That was it, unfortunately. The Whitecaps’ playoff hopes are sinking rapidly and “Nearer My God to Thee” is playing as the ship is nearing its end. Time to start looking ahead to 2023. Big changes need to happen in the winter transfer window.

Sartini was obviously not happy with the result but he was with the performance.

“I’m OK with the performance…(but) we make two silly mistakes,” he said.

The head coach spoke about the chances of the playoffs with five games left to go.

“We know that the playoffs are a miracle now, we have to fight for that,” said Sartini. “The most important thing now is to play better and win games…we don’t need belief to make the playoffs, we need belief in Colorado.”

Team captain Teibert isn’t ready to give up but he knows he and the rest of the team need to be better.

“Mathematically we are still in it…but tonight it’s an opportunity missed,” he said. “There are spells in the game pretty well…in the final third of the game, we need to be more clinical. We have guys who can do that, last year we showed that.”

“I’m the captain of this team, I take full responsibility,” Teibert also said. “…We represent the city of Vancouver, we represent this soccer club, it’s our pride on the line…the guys care so much. We want to make our fans proud. Next game, I guarantee you, until the final whistle we’ll give it our all.”

Expected goals were 1.4 in favour of the Whitecaps to 0.7 for the Earthquakes. Show that to someone who didn’t watch the game, know who was playing, or the result. They would be shocked if you told them the team with 0.7 xG won the game.

Oh, so that’s why the Whitecaps don’t spend huge amounts of money on signings!

The Whitecaps are in Colorado to take on the Rapids on Saturday without Gauld and Cavallini. Kickoff is at 6:30 p.m.

According to FiveThirtyEight.Com, the Whitecaps playoff odds are now at 3% after the loss in San Jose.

The playoffs do look very slim but if they want any hope of making it, they have to get the three points. No excuses. But it looks like many Whitecaps fans are already looking ahead to next year.