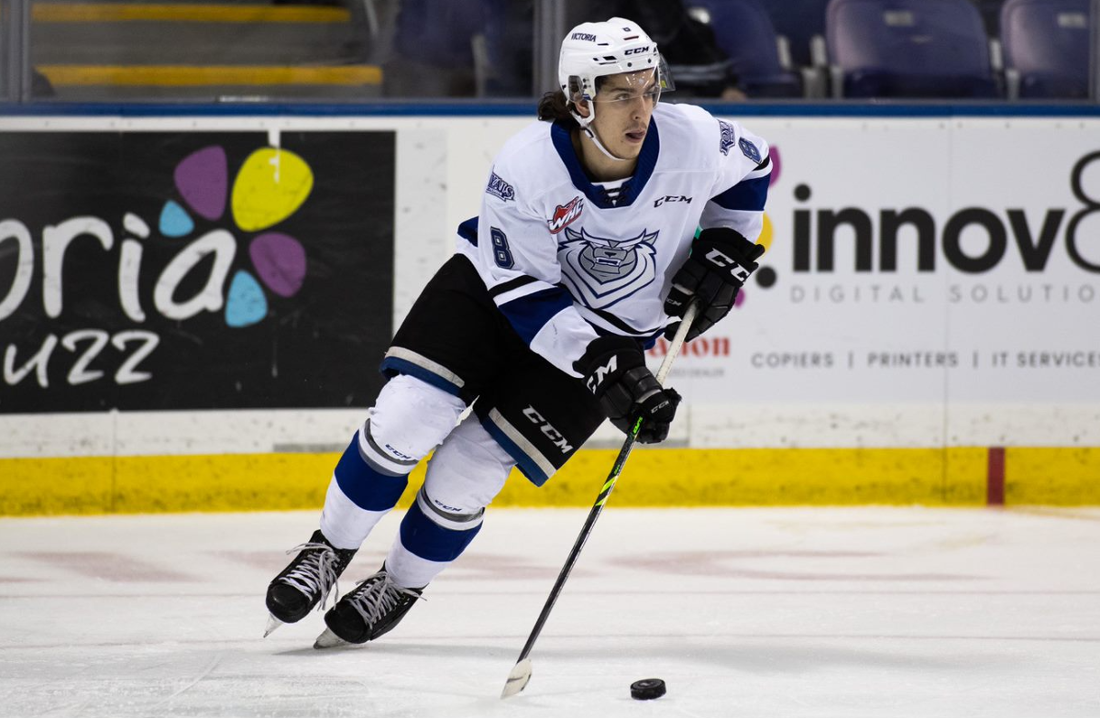 While the decision to play defence has worked out well for Victoria Royals blueliner Kalem Parker, it wasn’t always his first choice.

He credits his start in hockey to being at the rink with his parents, watching his older siblings play, and finally putting on the skates himself when he was four or five years old. Saying that once he started skating, he just never stopped. Both his brother and sister were forwards while they played, but as for how Kalem ended up being a defenceman? That is all thanks to his mom.

“I always wanted to be a goalie when I grew up. I had my pads and whatever but my mom just told me that defencemen help the goalies out more, so I just did the first year goalie and then I started playing defence instead.”

As for whether or not he’d ever want to try being in net again, the Saskatchewan native hasn’t completely closed the door on the idea. In fact, he had his own thoughts on how it could happen:

“Maybe emergency backup or something. Maybe once to try it out.”

However, something tells us that any team he plays for wouldn’t want to lose him on the blueline, so we probably won’t be seeing him put the pads back on any time soon. Unless, of course, Parker pulls a Brent Burns:

Heading into his third season with the Victoria Royals, Parker has been standing out, with a lot of talk being over his offensive abilities from the blue line. He’s hoping to come back and have people see that his entire games has improved, something he focused on over the summer.

“I want to improve everything and show everyone that I’m one of the best defencemen on the team, in the Western Conference, and even in the league.”

In describing the style of game he plays, Parker classifies himself as a two-way, puck-moving defenceman who likes to join the rush when he can. He went on to mention he likes to play gritty and hard on opponents. While Royals head coach and GM Dan Price has noted that this season’s team is probably the fastest he’s coached, Parker also brings up his speed and skating as a strengths and something he uses to create plays in the offensive zone.

Price points to Victoria’s first practice in the hub during the 2021 season when he talks about noticing Parker’s strengths as a defenseman:

As for being viewed as an offensive defenceman by many, Parker says doesn’t focus on the offensive side of his game. Instead, he says that his offence is a result of when he’s playing well defensively.

“I really try and focus on my defensive side first. I find when I’m playing good defensively, then the offensive side just naturally goes with that. Just joining the rush after making a good defensive play on a forward in the corner or whatever. I take a lot of pride in the d-zone before I get to the o-zone.”

Following the final Victoria Royals game of the 2021-22 season, Kalem Parker didn’t have more than a moment to take in the year before he was back on the ice, representing Canada at the IIHF U18 World Championship Tournament in Germany.

“All the guys were going to get together and then we were going to go home in the next couple of days. The next morning, I woke up and I got a text from Dan [Price] and he told me to call him ASAP. I was like ‘uh oh, what happened’ and he asked if I wanted to go over to Germany and play for Team Canada. I was in shock, like, the season just ended, what’s happening here? Then, I got a call from one of the Hockey Canada guys and he got me and my teammate Brayden Schuurman on a flight that afternoon to go to Germany.”

According to Parker, the call with Dan Price took place around 10 a.m. with the call from Hockey Canada at 11/11:30 a.m. After a rush to pack and get all of the necessities together, including more suits and ties, Parker and Schuurman were on a flight to Germany by 6 p.m.

“Until I was actually on the plane, I just didn’t really wrap my head around it at all. Once I was on the plane, I was like ‘wow, I’m going to go play for Team Canada right now,’ so it was really good.”

It was really good in Germany too, getting to play against the European teams and getting to [see what] the hockey is like over there. Overall, a really good experience.

Picking up one goal in his three games at the tournament, Parker says the it was a really good experience overall. While he was able to experience the international stage, the tournament also allowed him to see where his game was compared to others outside of the WHL.

“Just knowing that my game can play against the elite level of hockey players around the world was just really big for me.”

Luckily, the entire trip to Germany with Team Canada wasn’t all work.

“We got one day off in the tournament where our coaches told us to go do what you want around Germany. Go tour around and do whatever, just come back for lunch and supper or whatever. We went up to a castle and just walked around Germany, which was way different from Sask and BC, for sure, so it was a nice change.”

Get to Know Kalem Parker

Seeing the same teams from the BC Division a lot over the last two seasons, were there any guys that you started chirping a little bit just from seeing them so often?

“No, I’m not a big chirper, honestly. I’m a pretty quiet guy on the ice. Not [too many] chirps. I get chirped quite a bit but I don’t chirp ‘em back.”

“For a seven o’clock puck drop, I usually wake up around 9 a.m. and we usually get to the rink around 10 a.m for our pre-game meetings and our pre-game skates. That ends around noon/1 p.m. and then I go home and have about a 45-minute to an hour-long nap. Then, I get my pre-game meal which every day is a chicken and bacon ranch wrap. I go to the rink around 4 p.m., three hours early and do my taping sticks routine and my stretching routines. I play sewer with the boys before off-ice warmup and then after that I go from off-ice warmup to on-ice warmup to the game.”

Are you a pre-game coffee guy?

That seems to be a more common thing lately.

“Yeah, lots of guys on my team still like to have a pre-game coffee, but I just never got into it. Maybe if I’m playing bad for a couple games I might switch it up.”

“Maybe [Anson] McMaster? He’s like 6-foot-8, but we call him Ant-Man. That’s probably the most interesting one. Most are pretty generic just with like the last names, so I’d say McMaster’s.”

*McMaster is listed at 6-foot-6, but the 6-foot-8 comment makes the nickname even better, so please let it slide*

What’s your nickname from the team?

Which three teammates would you want on your zombie apocalypse team and why?

“I’m not too sure because you need some brains in that too, but I’d go [Carter Briltz]. Me and Briltzy would be the fighters, maybe, if it ever came to that. Then probably [Tyler Palmer] or the two Spiz’s [Jason and Ryan Spizawka]. One of the three, it would be a name out of the hat for leading us and being smart with what we do.”

It’s interesting, people keep mentioning the Spizawkas would be the problem solvers of their group.

“Yeah, they’re very smart so they’d know what to do, hopefully.”

Of course, you knew we had to ask Dan Price what fruit he would say Kalem Parker is…

Price: “Someone told me once that a tomato is actually a fruit, not a vegetable. So for Parker, I’m going to say tomato. The reason is because when you look at him and you think he’s just a skilled player, you would think he’s just a vegetable, but he’s also a great defender which also makes him a fruit.”

For the record, fellow Victoria Royals defenceman Luke Shipley said that Parker would be a strawberry.

What would you do if you could have the perfect day off from hockey?

“Honestly? Sleep in for sure. It’s probably my favorite thing. Then probably just hang out with the boys. We go to the mall a lot and we just go downtown and walk around by the water. That’s probably one of the best things to do on a day off.

What’s the most fun thing you did this summer?

“Germany, if that counts for summer. Other than hockey, probably just go on the lake on weekends and just surf by the boats and just forget about hockey and the stresses for sure.”

If you could build your perfect sandwich, what would be on it?

“Chicken, bacon, tiny bit of lettuce not too much, with chipotle sauce, maybe some ham, and on white bread.”

“All of the boys are super excited to come back and play in front of you guys. Hopefully you guys are excited to watch us again and hopefully we’ll do something special this year.”