The Whitecaps need to find an identity 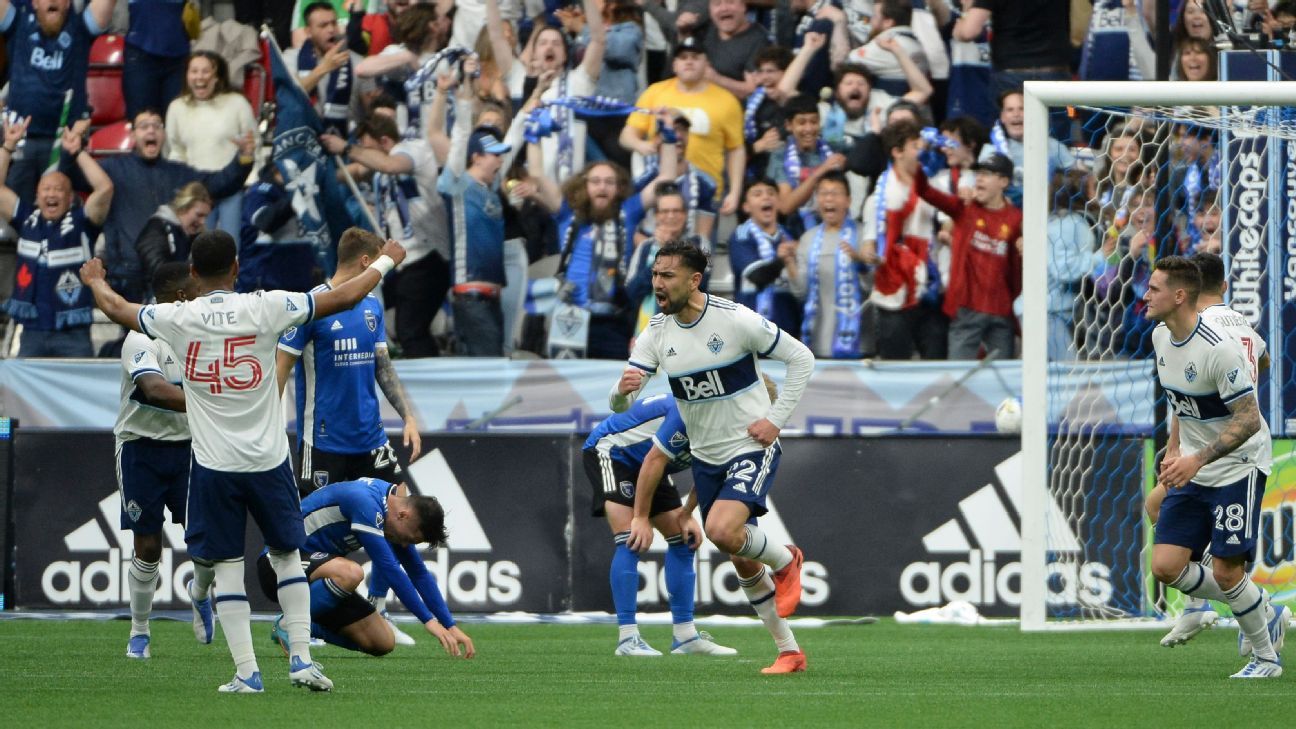 Six games are remaining on the schedule for the Vancouver Whitecaps.

Six games left in the playoff push. However, the playoff dreams for the Whitecaps are fading away as fast as a shooting star. After the 3-0 loss at home to Nashville SC last week, LA Galaxy drawing to Toronto FC 2-2 and the Portland Timbers beating Austin FC 2-1 a few days ago, it looks very bleak for the Whitecaps. According to FiveThirtyEight.Com, Vancouver’s playoff odds are at seven percent. Cue the so you’re saying there’s a chance line from Dumb and Dumber.

Yeah, there is a chance, a small one. If the Whitecaps want any hope of making the playoffs, they will have to win four out of their last six games.

It’s daunting but not impossible. Basically, they would need the Vanni Sartini bump from last season to have a sequel. Oh and help from the out-of-town scoreboard.

There are lots of factors as to why the Whitecaps are in this position instead of looking forward to Vancouver having playoff soccer.

First of all, COVID-19 and injuries have taken a toll on the club since the start of the season. Those don’t help but they cannot be used as an excuse. The Whitecaps only had one win in their first eight games. Goals were hard to come by due to the final touch or pass in the box and the lack of service. Luckily, they traded for Julian Gressel to address the lack of service.

The defence was and kind of still is a wreck. Fortunately, the defensive midfield got some help with the signings of Andrés Cubas and Alessandro Schöpf. Cubas is very good at tackles and interceptions while Schöpf is also good defensively and provides service in the box.

The backline has shown it can be great at times but other times, it can be bad. Tristan Blackmon and Ranko Veselinović have been the most part the Whitecaps’ best defenders. Javain Brown has had ups and downs and so has Jake Nerwinski. However, in recent games, Nerwinski has been caught flat-footed defending.
Losing Maxime Crépeau hurt. Thomas Hasal and Cody Cropper haven’t been bad at all but they aren’t saving games the way Crépeau did last season.

Ryan Gauld had a slow start to the season but has found his form. Brian White has been a disappointment but the injuries and COVID doesn’t help. Last season seems like an anomaly and he and Gauld haven’t found the chemistry this season. Perhaps next year will be better for him.

Lucas Cavallini has improved and is their leading scorer with eight goals but he lacks discipline. He gets yellow cards for unnecessary things and against Nashville, he got a red for stepping on Alex Muyl’s head.

How about the stats? What do they say about the Whitecaps?

Well, Vancouver is dead last in the MLS in accurate shooting percentage (or shots on target percentage) with 29.1%. They are second last in assists with 28 only above Sporting Kansas City. The Whitecaps are also fifth last in MLS in accurate forward zone passes with 4360. They are third last in save percentage with 59.5% and are tied with Toronto FC for the fourth most goals against in the league with 59.

What about goals for? They are tied with DC United with the third least goals in MLS with 32.

There is something else that plagues the Whitecaps: Their identity. Actually, their lack of any identity.

What is this the Whitecaps’ identity?

They are not a possession side, no doubt. The Whitecaps don’t score a lot of goals. Are they a solid defensive team? Definetly not. The Whitecaps are also not a side that spends a lot of time in their opponents’ half.
Whether they make the playoffs or not, the Whitecaps need to find an identity. Right now, there is none of that.

That will factor into play in the winter transfer window. If they do figure out what kind of team, they want to be, then they better spend the money on players that will make that happen.

Some things the Whitecaps are good at are putting pressure on the ball carriers and at times, the counterattack. The pressure has helped them this season and they have had success and goals with it. However, it is hard to maintain pressure for 90 minutes and it could be costly if you take the foot off the gas for one second. (See Nashville’s first goal last week.)

For the counterattack to work, they are going to need pace. Now, the Whitecaps aren’t aren’t necessarily a fast team. Fast wingbacks, wingers and strikers make a good counterattack. Unfortunately, none of the Whitecaps strikers have pace. For wingbacks and wingers, Gressel has some and Marcus Godinho has a little. Cristian Dájome has got some pace and Ryan Raposo has a little bit

I’ve said on the Terminal City FC Podcast over the past few weeks that I am sick of the three at the back. It is just not working anymore. Perhaps, going to a back four could spark more pressure and counter-attacking play.

So that’s how I would like the Whitecaps to play but I’m just some guy who writes about them.

Whatever the identity the team chooses, they better go big or go home this winter so we can talk about the possibility of playoffs in 2023.

The Whitecaps’ next match is Sunday and they are in San Jose to take on the Earthquakes. Kickoff is at 6:30 p.m.