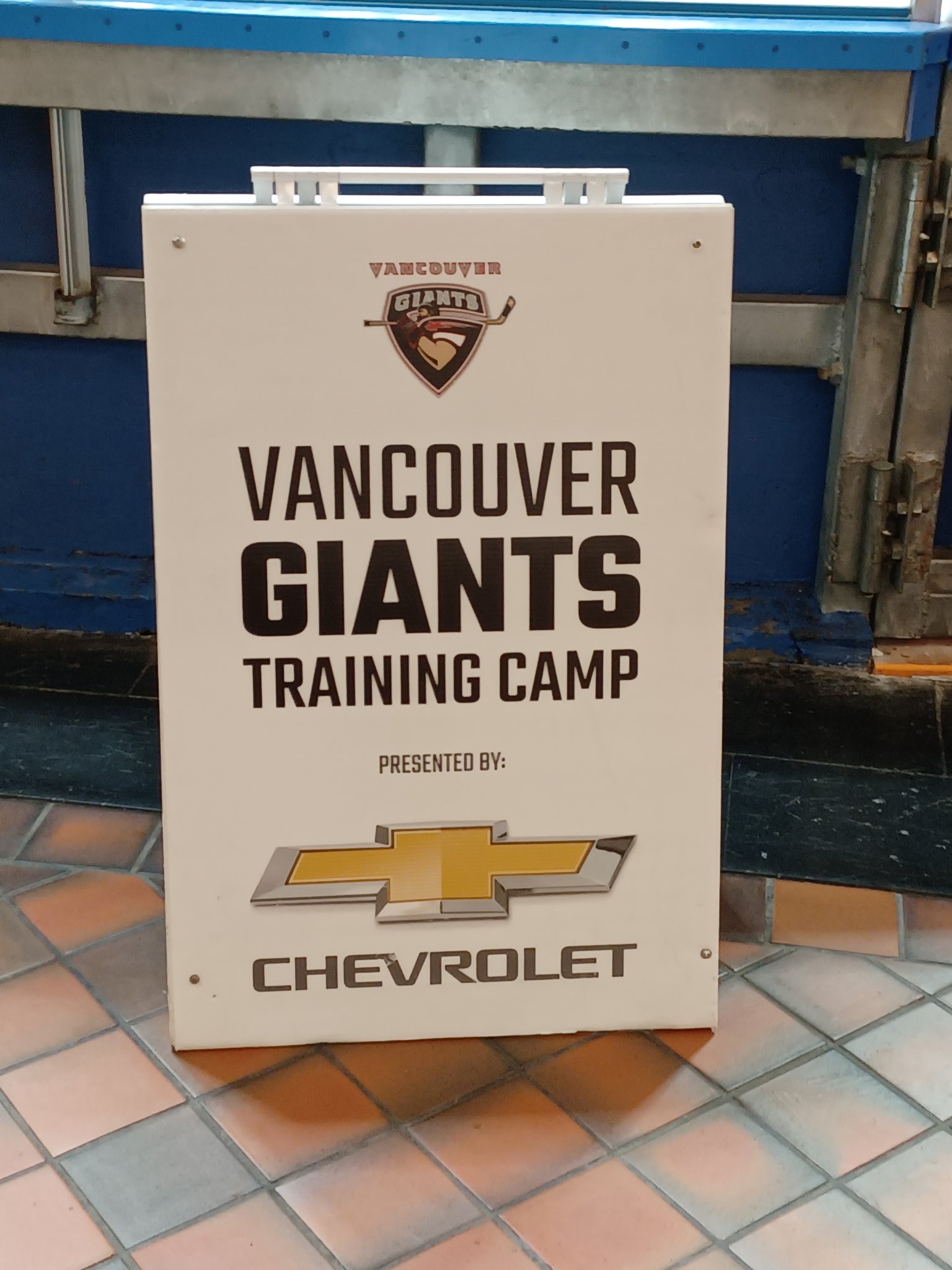 Day two of Vancouver Giants training camp featured drills and the first three scrimmages. This was the first opportunity for fans to see newly acquired Samuel Honzek along with favourites such as Jesper Vikman, Zack Ostapchuk and Mazden Leslie this season. Each scrimmage consisted of two running time 20-minute periods. Here is who stood out during the games.

The first game of training camp saw Team Gallagher shutout Team Lucic 3-0. The main takeaway from this game was the chemistry that looks to be developing between Honzek and Ty Thorpe. Each contributed a goal in the victory and was among the most notable players on the ice. Scoring the third goal for Team Gallagher was Ethan McEneany, a 10th-round pick from 2021. He is one of the players that has stood out so far during this training camp with his high skill and strong skating.

The play of the game was an easy choice. Facing a 2-on-0 rush, goaltender Nathan Niedermeiser went post to post, denying a goal. A camp invite, he definitely caught the eye of many keeping the game as close until the very end.

The last two players that really stood out were defencemen Max Lavoie and Spencer Clarehout. Starting with Lavoie, he looked calm and collected the entire game. His passes were tape to tape, and he didn’t make mistakes. He played a simple game which contributed to his team’s victory. As for Clarehout, he let his offence and skating do the talking. On Team Gallagher’s first goal, he not only started the play by skating the puck into the zone, but he also made the cross-ice pass to Honzek, who buried the game-winner. These two defencemen stood out for all the right reasons and were key factors in their team’s shutout victory.

In an exciting, come-from-behind win, Team Gallagher stayed perfect beating Team Byram 3-2 in a shootout. Team Byram jumped out to the early 2-0 lead thanks to a penalty shot goal by Julian Cull followed by a goal by Jaden Lipinski. Team Gallagher, however, stormed back in the second period with Tom Cadieux scoring to make the game 2-1, followed by a penalty shot goal by Samuel Brown. In the shootout, it was Justin Ivanusec who scored the winner after a sweet move. Team Gallagher moves to 2-0-0 while Team Byram starts their tournament off 0-0-1.

The stars of the game were the goaltenders as Matty Hutchison, and Jesper Vikman stole the show. Hutchison stopped all but the penalty shot goal by Cull while Vikman was calm in the net, showing strong cross-crease movement. The goaltending position is one of the Giants’ strongest groups, and a big reason is these two.

A player who stood out was defenceman Isaiah Arnold. Originally drafted by Winnipeg in 2020, he showed strong board and good puck control on breakouts. His defensive game stood out in game two as he helped Team Gallagher remain perfect through two games.

In the final game of day two, Team Byram got their first win of training camp as they defeated Team Lucic 5-2. Jaden Lipinski led the way with two goals, while Damian Palmieri, Tyden Redlick and Ilija Majkic all got on the scoresheet. Team Lucic received goals from Ethan Semeniuk and Jacob Boucher.

All four goaltenders played well, but a special shoutout goes to Burke Hood, who had arguably the best game. The 6th-round pick of the Giants in the 2022 Bantam Draft put on a show by showing off his athleticism and reflexes. He made save after save and showed that he will do whatever it takes in the net to stop the puck.

The other player that had a great game was Majkic. He was able to show off his speed beating the defender to the puck on a dump which led to the first goal of the game, and was also able to score an empty netter. Overall, it was a good game for the 15-year-old as he helped Team Byram claim their first win of training camp.

The Giants are back on the ice Sunday with games set for the afternoon/evening. The first game is set for 4 pm as Team Lucic takes on Team Byram.