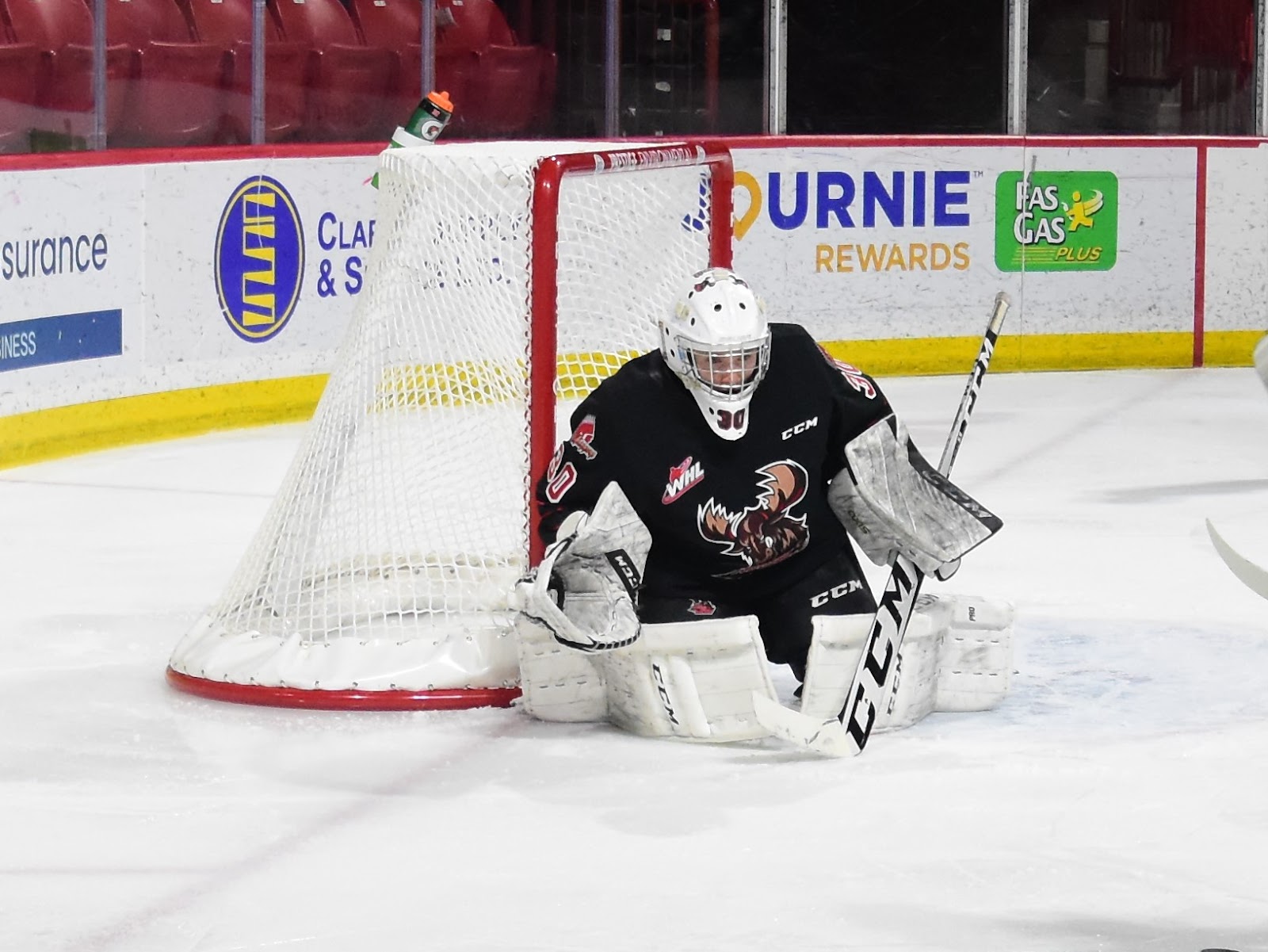 The jump from Bantam hockey to Midget can be a difficult transition, giving players a faster pace and higher skill level to match. From Midget to the WHL, however, it’s a different story. “It’s a whole different level,” Moose Jaw Warriors goaltender Jackson Unger said. “It takes some getting used to—adjusting, developing, getting stronger in every aspect of the game. It takes a lot, but it’s good once you’re there. It’s fun.”

The Warriors had an impressive season last year, placing fourth in the Eastern division. Although Unger didn’t play the whole season with the Warriors, he established himself as a strong goaltender and worked hard to make the transition from youth hockey to the Major Juniors as seamless as possible. “I thought I had a really good season, I had some strong games,” Unger remarked when asked about his rookie campaign. “I think there were definitely some games where I was like, ‘Wow, this is a fun league to play in. This is a great team.’”

Last season also presented a number of highlights for Unger to reflect back on: “I think a lot of games against Winnipeg I had some strong games. The game where I shut out the Teddy Bear Toss — great feelings in the dressing rooms and bus rides home. It was good around that time!”

Unger has been on the ice for the majority of his life, donning skates for the first time when he was four or five years old. “My parents got me into skating lessons and I guess at a young age I just loved to play hockey, and I just kept rolling with it and found myself getting better and stuck with it and eventually became a goalie. I loved it, and kept playing goalie.”

When asked what advice he’d give his last-season self, he said, “I’d probably work for consistency. Obviously, there were some really strong games, but then some games maybe I wanted a goal back or two. But focus on consistency, focus on what you did good in the good games and bring it over to every other game.”

Going into his sophomore season and first full season in the WHL, Unger will look to take his own advice and apply it to his game, keeping himself strong and steady between the pipes.

All About His Game

Unger knows exactly what kind of player he is. “I think I’m an athletic goalie, I think I play the puck well and I move well too! I’m really calm in the net, I’m really steady headed and I don’t show much emotion. I just do my thing in there and yeah, I just play the way I always play!”

If you weren’t a goalie, which position would you play?

Although his strategy and headspace remain consistent, his game-day routine isn’t what you’d expect for a goalie. “I really don’t do anything special,” Unger said with a laugh. “I know some goalies do some crazy stuff and all that, but I go to the rink, do a stretch, don’t do anything superstitious really, just stretch or maybe a gameday skate.”

“Well, I don’t have any particular meal that I always eat. I mean, there are good meals like chicken and rice and stuff like that, but it’s not a must. I have a routine: when I get to the rink I maybe throw a ball around, do some of my own stretches, play sewer ball with the rest of the team. But yeah, I don’t really do anything special.”

With roughly one week until the pre-season and just over three weeks until the home opener, players and fans alike eagerly anticipate the upcoming season. Because of Covid, the playoff format last season didn’t look like what it did a few years ago—originally, teams from the Eastern Conference would play the Western Conference teams once a year during the regular season. With Covid came inter-conference play, which meant the two conferences would not play each other until the top team from both made it to the WHL Final.

This season, however, it’s back to normal: At least twice this season, teams from the Eastern Conference will play Western Conference teams, and vice versa. For players whose first WHL season was either of the last two years, this is extra exciting, as they get to play against teams they never have before.

“I’m super excited to play against the teams we haven’t played yet!” Unger said. “The BC, the US… I know players from each conference are talking smack about which conference is better.”

That’s hilarious. What are they saying?

(Laughter) “They’re obviously saying theirs is better, we all say ours is. It’ll be fun this year to play those BC and US teams.”

The 2022-23 season is bound to be a fun one, with new teams to take on and a talent-filled roster. When asked which underrated player Warriors fans should keep an eye on this season, Unger gave two names: “Ooh, I think Max Wanner. He’s underrated, but he’s a special player. And then on the come-up, maybe Cosmo Wilson this year.”

The Team and Moose Jaw

Unger definitely has made a home for himself in Moose Jaw, building strong relationships and bonding with the team.

“There isn’t a whole lot to do [in Moose Jaw], that’s for sure, but I love how close everything is. All the boys are living on three streets, all less than five minutes away, so that’s probably my favorite thing.”

Who has the best locker room music on the team?

“Ooh… I gotta give that to Riley Niven. He’s got a good music taste.”

What does he play?

“He gets the boys pumped up on game days, he’s got a good track. Some mixes on SoundCloud, bunch of remixes and stuff.”

Out of everyone on the team, Unger says he would least want to play against Jagger Firkus. “He’s an animal on the ice, he can just score like it’s nothing.”

Get To Know Jackson Unger

“I think, uh… ooh, that’s a tough one! I like watching Shesterkin. Smaller goalie for the NHL, he was just, he was pretty crazy in the net last year. All over.”

Are you a coffee person?

“Oh, coffee! (laughs) Yeah, I like coffee! I like the Tims, the vanilla iced coffee. That’s a favorite, yeah. Every once in a while, not every day, but yeah!”

Alright, so here’s a hypothetical: It’s an alien invasion, and you have to pick three members to survive with. Which three would you pick, and why?

“Oh… that’s a good one! I gotta say Max [Wanner], Max is one of them. He’s a small-town kid, he probably just knows what to do in that situation. And then maybe Jagger Firkus, he’s a funny guy but he gets through it too. And probably Thomas Tien. He’s got some smarts in him.”

Are you an early bird or a night owl?

“Night owl for sure. I hate those early mornings.”

You have to delete all but 3 apps off your phone. Which 3 are you keeping and why?

Are you an Apple Music or Spotify guy?

“Apple Music for sure.”

A message for Warriors fans:

“They’re awesome! Every game they’re good, they were electric last year during playoffs and amazing for us in big games. Hopefully they’ll keep it going as Covid shuts down, with more and more energy.”

3 thoughts on “Jackson Unger: Welcome to the Unger Games”