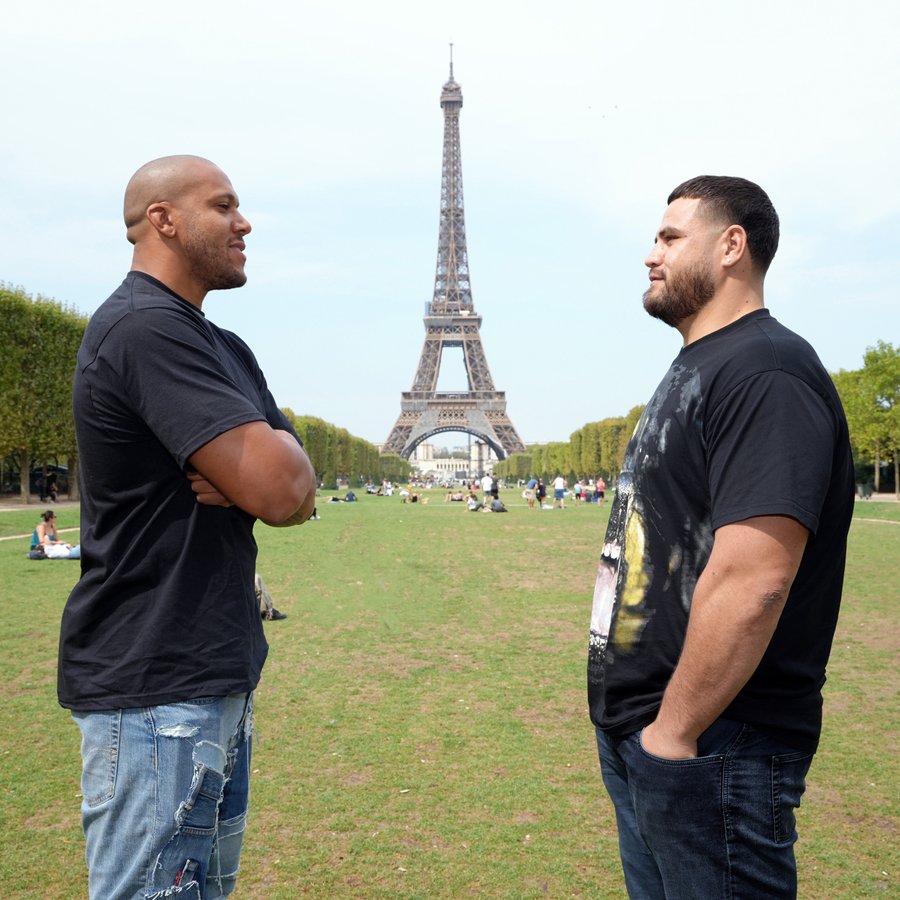 After a short break, the UFC will return, traveling to France for the very first time for UFC Paris. French fighters can be found throughout the card including Benoit Saint-Denis, Nassourdine Imavov, Fares Ziam and, of course, Ciryl Gane in the main event. Trying to grab the upset against the heavyweight title challenger is the beer-slamming Aussie, Tai Tuivasa. He’s not the only Aussie trying to make a statement;

Robert Whittaker aims to prove he’s the second best Middleweight as he takes on ‘the Italian Dream’, Marvin Vettori. We’ll also seen one of the best Canadian contenders, Charles Jourdain, take on British standout, Nathaniel Wood. All of these matchups (plus more) are covered below and feature BLÜ’s predictions along with the Bet99 Sportsbook Odds.

With both men coming off of sensational performances, this matchup is looking like one of the most exciting of the night. Now a seasoned UFC veteran, Jourdain’s last 3 bouts have made him a fan favourite. He dominated Andre Ewell and Lando Vannata and followed it up with a fight of the night brawl against Shane Burgos, where he lost in a tight, majority decision.

Wood has done very well himself, but has spent the majority of his UFC run at 135 instead of 145. He returned earlier this year with an impressive win over Charles Rosa with the home crowd advantage in London.

This will almost inevitably lead to one of the best fights of the night in a WILD decision, but Jourdain holds all the edges in this matchup. Jourdain just took on one of the most dangerous featherweights on the planet in Burgos and took him to a majority decision. He’s vicious, relentless and is used to fighting the bigger guys at 145. With those edges, it seems likely that Jourdain will be a little too much for Wood to handle over 15 minutes.

Here we’ve got a rare double UFC debut on the main card with both men making their first trips to the Octagon. Gomis is coming into this fight on an 8 fight win-streak with appearances in Cage Warriors, UAE Warriors and Ares FC.

Jarno Errens has also looked impressive outside of the UFC with a 13-3-1 record and appearances on UAE Warriors and Brave CF.

When two debuting fighters square off in the UFC, anything can happen. There’s just a lot more small factors that lean towards Gomis. He’s on a huge win-streak, has had the tougher fights and has grabbed finishes at both 145 and 155. There’s also something you may not think of… the location! This is the first UFC event in France and, as such, gives extra motivation to the French fighters. With that extra fire and finishing ability, I’m predicting an impressive finish from Gomis.

Haqparast has struggled in his last couple of outings with decision losses to Dan Hooker and Bobby Green, but was on a 5-1 run before that with wins over Rafa Garcia and Marc Diakiese. Makdessi has also struggled in his last two appearances with a loss to Francisco Trinaldo, then a tight, split decision win over Ignacio Bahamondes.

Makdessi may have won his last bout over Bahamondes on the cards, but it definitely wasn’t the most convincing win. Meanwhile, Nasrat has lost his last two, but they were against two VERY high calibre opponents. It’ll be a closely contested bout, but Haqparast has had the tougher fights recently, he’s very skilled, plus, you have to consider the fact that Makdessi is 10 years older at 37 years old.

Neither of these men have found much success in the UFC, but they’re always down for a brawl. Kopylov has yet to grab a win the UFC with losses to Karl Roberson and Albert Duraev.

Di Chirico has been around a bit longer, grabbing 4 wins in the UFC. His most impressive win leading up to this weekend has to be his 1st Round head kick KO over Buckley last year.

This is quite easily the most unpredictable matchup on the card. With two men on a losing streak, it comes down to who’s been working harder. We won’t find that out until after it’s done, but you’ve gotta give Di Chirico the slight edge here. Kopylov has yet to win in the UFC while Di Chirico has grabbed a few wins, including a HUGE 1st Round headkick KO. Just like the French fighters, there’s also going to be a large Italian crowd coming for Vettori that will likely give Alessio some kind of a boost here. He’s fought the tougher fighters, grabbed a couple wins, has more power and has a huge Italian crowd behind him, so I’m predicting an exciting finish for Di Chirico.

With the middleweight title up for grabs soon, this is one of the most important matchups in the division.

Since 2014, Whittaker has only lost twice, both of those coming to the champ, Adesanya. The last one was so close that it had many fight fans, including myself, thinking that maybe Whittaker had regained his title. Vettori’s last two losses have also come to the champ, but had a much less successful venture, getting dominated by him for the entire fight.

Sadly for Vettori, no crowd is going to be able to save him here. Whittaker could have easily been the Middleweight champion after his last fight and has looked unbeatable when facing everyone other than Adesanya. He’s just a level above Vettori and will more than likely win in a mildly exciting decision.

With over 7 months since his CLOSE title shot loss to N’Gannou, Gane makes his hotly anticipated return in the UFC’s first trip to his home country of France. Before losing by decision to Francis, Gane was undefeated with EASY wins over top contenders in the division like Lewis, Volkov, Rozenstruik and Junior dos Santos.

Tuivasa had a rocky stretch in the UFC with 3 losses in a row to Junior dos Santos, Blagoy Ivanov and Spivak, but has followed that up with FIVE straight MASSIVE knockout wins over contenders like Struve, Hardy and Lewis.

Similar to Whittaker, Gane could have easily been the champion right now if we had better judges and he wouldn’t have made a tiny mistake in the 5th Round. He’s not just a level above Tuivasa, he looks like he’s in another league. He knocked out Lewis, handled Francis’ power for 5 rounds and has dominated every opponent he’s ever faced. Tuivasa could shock the world with a single punch, but if N’Gannou couldn’t do it… I don’t think he can. Gane will probably wear Tuivasa down for a few rounds and eventually get into a good position to grab a finish, blowing the roof off of the arena in front of his home crowd.

After getting brutalized in his UFC debut against Elizeu Zaleski, Saint-Denis followed up with an impressive win over Niklas Stolze. He now returns to his home country of France to compete against the debuting Miranda. Miranda has been impressive recently with a 7-1 record in his last 8 fights, appearing multiple times in Brave CF.

This is one of those scenarios where the UFC is setting a promising prospect up with an easier opponent in their home country. Before his horrifying loss in his debut, he had grabbed finishes in all of his fights, going undefeated outside the UFC. He even grabbed a finish in his last fight in June.

On the other side, Miranda hasn’t really ever faced a top-tier opponent yet in his career. With all those factors, it already seems clear that Saint-Denis will grab a win. What pushes it over the edge is the fact that this man served for the French military. It may not be something that people will think about, but I guarantee you, Saint-Denis would rather die than lose this fight in the country he fought to protect. Saint-Denis will more than likely dismantle Miranda for an early finish.

Imavov hasn’t become a household name yet, but had a fairly impressive start to his UFC journey with 3 wins and a split decision loss. The most impressive win of his career came in his last one with a 2nd Round TKO over former top contender, Edmen Shahbazyan.

Buckley has also been impressive lately with 3 wins a row going into this weekend. He grabbed a couple of finishes over Antonio Arroyo and Albert Duraev, as well as a close, split decision win over Abdul Razak Alhassan.

This is another tight matchup, but, once again I have to give the advantage to the Frenchman. Outside of that, he’s also ranked in the top 15 and has only lost by a majority decision in the UFC against Phil Hawes. He’s also finished formerly ranked contenders Ian Heinisch and Shahbazyan in his last two bouts. Buckley is MASSIVE and can always land something big, but Imavov is simply the more skilled fighter. He should be able to either wear Buckley down for a dominant decision win or grab yet another finish over an impressive contender.

Here I highlight some betting lines that you might want to take advantage of for UFC Paris. These are odds that favour the bettor. Although some of them may conflict with my picks, they offer a fair reward for a slight bit of risk.

In a division that sees a LOT of finishes, it’s rather unusual to see a betting line this high at 2.5 rounds. Gane is a HUGE favourite, he was one tiny mistake away from becoming the heavyweight champ this year and he’s in Paris, trying to put on a show for his people. Even if Gane isn’t the one who grabs the KO, Tuivasa’s only chance is to grab an early KO because Gane’s cardio and IQ is unmatched at heavyweight. This makes +105 the perfect betting line to throw some cash on.

When there’s two fighters that haven’t been winning, there tends to be a finish. Not only that, we already know that Di Chirico has finishing power; he grabbed a 1st Round headkick KO over Buckley last year. At +137, it’s well worth the risk.

The Underdog Fares Ziam at +162

Although I’ve been leaning towards Figlak to grab the win, Ziam has all the tools to grab a win here. He’s a talented striker, he’s in his home of France and he’s got the UFC experience. His performances lately have been mediocre, but he’s got a chance of overcoming that this weekend. At +162, especially against a debuting fighter, it’s worth risking a few dollars.