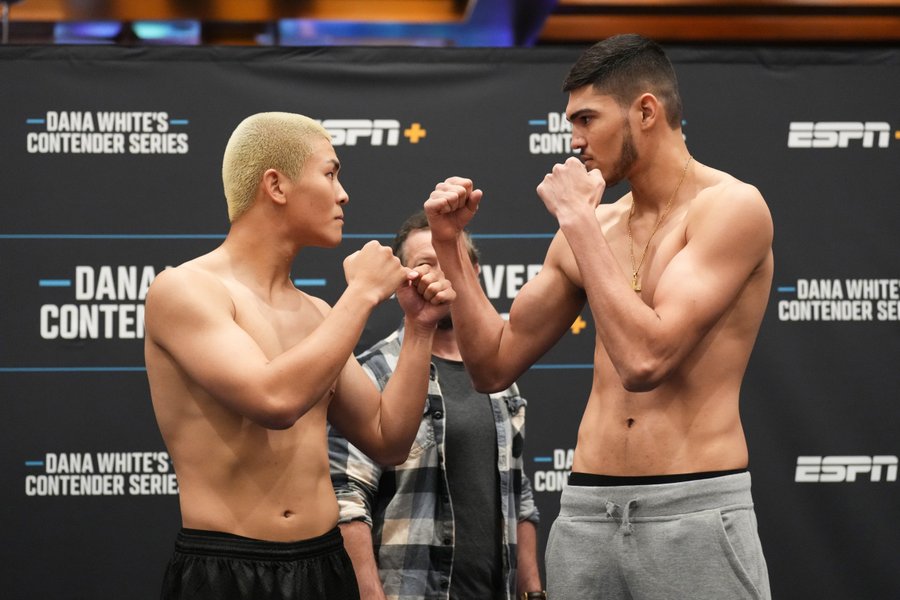 It was another exciting night on the UFC Contender Series with three 1st Round finishes and all 5 winners grabbing contracts. Viktoriya Dudakova needed all 3 rounds to get the win and convince UFC president Dana White she deserved a contract. Blake Bilder, Mateusz Rębecki and Sedriques Dumas needed only the opening round, with all three men locking in 1st Round submissions.

Then, after the main event, where Yusaku Kinoshita grabbed the lone TKO of the night, White said he believes the UFC has a new Japanese sensation. All the fights, along with the BLÜ’s Power Rankings for the night, are described below.

Blake Bilder def. Alexander Morgan by Submission in the 1st Round

Being that Bilder is such a slow starter, Morgan was the one pressuring early, picking Bilder apart with some of the most crisp, clean, technical striking I’ve seen. Even though his strikes were crisp, he wasn’t necessarily being active, a style that will hurt you on the UFC Contender Series. Then, out of absolutely nowhere, Bilder managed to take Morgan’s back after a punch and locked in a DEEP submission. Morgan was doing well to defend, but ultimately couldn’t get Bilder off of him and tapped in the 1st Round.

He may start a tad slow and will likely struggle with UFC featherweights, but you’ve gotta give him the contract. He’s still undefeated and managed to submit a VERY talented prospect.

Silva threw out a couple of heavy shots early, but was quickly dragged to the ground by Dudakova. Silva was doing well to shut down a lot of the shots and submissions, but Dudakova was in clear control. Every so often, Dudakova would get back up, get a couple of shots in and restart the grappling. After 4 minutes of these dominant grappling exchanges, the ref stood them back up, but Dudakova dragged the fight back down again.

Right away at the start if the second, Dudakova rushed in for the clinch. This time though, it was Silva that managed to find herself on top. As opposed to Dudakova’s slower approach on the ground, Silva was really shredding her apart with ground and pound. Sadly, the exchange ended up getting restarted by the ref. From there though, Silva was in a dominant position along the fence, looking for another takedown. This time it was Dudakova on top, but it didn’t last too long. With Silva grabbing more control time, also landing the more damaging shots, it seemed clear the fight was tied 1-1 going into the final round.

After seemingly twisting her own ankle in the 2nd Round, Dudakova seemed to be struggling a bit with her striking. That gave Silva the opportunity to land a decent shot, but that led to Dudakova finding herself in the dominant position on the ground. Just like before, Dudakova was smothering Silva with her grappling. Silva was close to getting up on multiple occasions, but couldn’t quite recover as Dudakova was dominating her on her back.

It was a pretty clear 29-28 win for Dudakova, but I wasn’t sure if she had done enough to grab the contract. I only say that because she wasn’t really chasing a finish in the 1st Round and was kinda dominated in the 2nd Round. That being said, it’s still pretty impressive to be that big and grappling-heavy at 115 pounds. We also found out in her interview that she came in with an injured knee and tweaked it in the fight.

Mateusz Rębecki def. Rodrigo Lídio by Submission in the 1st Round

It looked BAD for Rębecki early as a HUGE head kick from Lídio slammed straight into his face. Amazingly, he shrugged it off and managed to drag Lídio to the ground. He got back up, but Rębecki, clearly the much more experienced wrestler, threw Lídio into the canvas. This time Lídio couldn’t get back up. He was quickly choked out in an impressive 1st Round finish by Rębecki.

After eating a head kick like that, with a 7 inch reach disadvantage, still managing to get a 1st Round finish, you have to give him a contract.

Sedriques Dumas def. Matěj Peňáz by Submission in the 1st Round

Both men were throwing out some heavy shots early, but the first big move came from Dumas as he went in with a HEAVY takedown. Peňáz got did get back up. But then, he was still stuck in a DEEP guillotine along the fence. After about 10 seconds of that, it looked like maybe Dumas was going to gas out his arms… but then Peňáz tapped, giving Dumas one of the fastest submissions in Contender Series history.

Peňáz was looking like one of the most promising prospects of the night, so, for Dumas to get him out of there with a standing guillotine… that’s incredible. A clear choice for a contract, possibly even the number 1 spot in my Power Rankings.

Yusaku Kinoshita def. José Henrique by TKO in the 3rd Round

Kinoshita was the one pressuring early, but Henrique was countering him with HUGE shots. Both men landed some BIG shots, but Henrique’s power didn’t slow Kinoshita down at all. It was this constant pressure that had Kinoshita up 1-0 on my card after the first round.

This pressure continued into the 2nd Round. However, neither fighter was landing much shots. Every time one of them landed though, both men would let it all go in WILD flurries. It was unclear who was landing better in these exchanges but Henrique’s length definitely gave him an advantage in those exchanges. I had it 1-1, but it was close enough for anything to be possible.

After a timeout from an eye-poke, Kinoshita came in with a vengeance, slipping a punch from Henrique and dropping him with a BOMB of a counter. It may have been an early stoppage from the ref, but it didn’t seem like Henrique was going to be able to recover properly.

It wasn’t really the most UFC exciting fight, considering the minimal activity, but there’s no doubt that both of these guys are very talented. I wasn’t sure about a contract before that finish, but you have to give one out after that huge punch over a tough opponent.

Dana was quick with his decisions tonight, quickly giving out contracts to all 5 winners. He didn’t initially seem convinced of Blake Bilder, saying he was a bit old. White said that his performance was exciting and deserved the contract. He seemed equally unsure at first with Dudakova, saying the he didn’t like the fight. However, White quickly changed his tune, saying she has the potential to be a future champ. There was absolutely no hesitation with the last 3 fighters who all grabbed finishes. He was impressed by the last fight said both of them have a good future. Out of all the episodes this season, I’d have to say that this was the best in terms of overall talent. All 5 of these fighters have the potential to do some great things in the UFC.