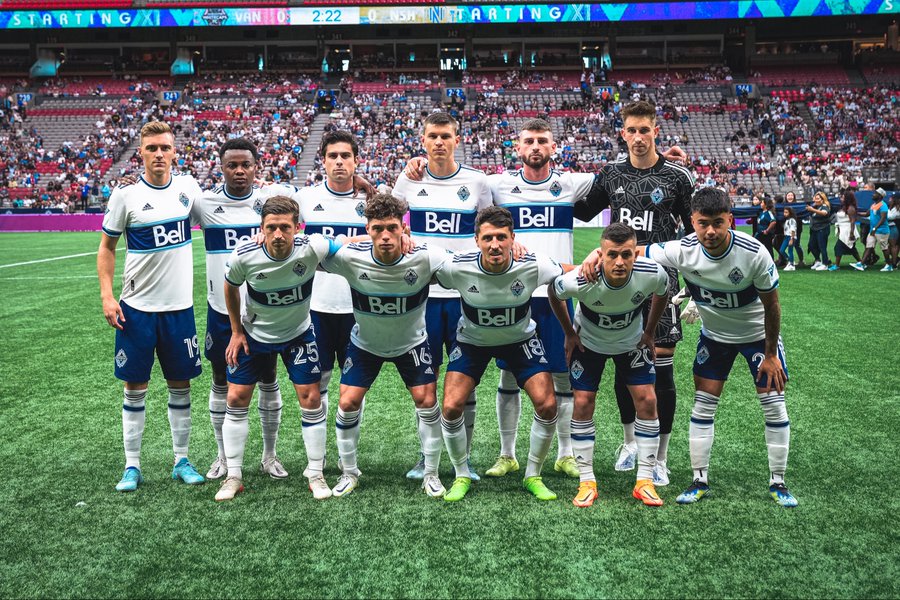 This was a must-win game for the Vancouver Whitecaps. Unfortunately, this performance was the epitome of unacceptable.

Nashville was two points ahead of Vancouver before the match but now jump to fifth in the MLS Standings. The Whitecaps are in ninth. The playoffs are getting more and more unlikely.

This is another strong one.

Ryan Gauld has four goals and six assists in his last ten games and was given the captain’s armband for the second straight home game.

Brian White was making his first start in a few weeks. He’s been out with a rib issue and has come off the bench in recent games. I think giving him a start is the best for him. Plus, Lucas Cavallini is a good option off the bench.

Javain Brown was back in at the back alongside Tristan Blackmon and Ranko Veselinović. These three are going to be behind Andrés Cubas and Sebastian Berhalter. Since coming back from injury, Berhalter has looked very good. His passes were accurate and he has been starting the attack. Berhalter’s defensive game has been just as good since his return.

It is also great to see Alessandro Schöpf get another start. The Whitecaps’ recent signing has impressed. He is doing a good job of delivering balls forward and he has looked solid alongside Gauld.

I would have started Marcus Godinho instead of Ryan Raposo. But that is nothing against Raposo and I’m not too upset about it.

Julian Gressel scored in Vancouver’s last game against Real Salt Lake and he is starting to show us why he is one of the best wingbacks in MLS. In recent games, his playmaking has been what has been expected of him.

Having come off an MLS Team of the Week appearance with Gauld, Thomas Hasal was back between the sticks. He made some big saves in Salt Lake City and giving him another start isn’t a bad idea at all

Again, a strong lineup by head coach Vanni Sartini, especially the midfield. Points were needed, can they deliver? (Spoiler alert: No.)

The Whitecaps started off with pressure on the ball carriers. That is what gave them success all season.

Nashville SC was trying to keep the ball as much as possible. They came close when Hasal’s punch did not clear the ball all the way. However, Brown was there to clear the danger.

Vancouver started to get in on the action as they had the ball in Nashville’s 18-yard box. That resulted in a corner but Gauld’s shot was off the fingertips of Nashville SC goalie Joe Willis. They were really fighting for the ball in the box. The pressure was building.

The Whitecaps were showing speed on the counterattacks. Berhalter intercepted the ball and sped down and cut it to Gauld but it was just wide of the left post. You could tell they wanted to get ahead early.

Blackmon decided to go on a “Rudiger Run” with the ball towards the 18-yard-box but as he was swarmed by three Nashville players, he found Gauld but the Scotsman’s shot just missed over the bar. It would have a real Rudiger Run if Blackmon got the shot off.

But Nashville struck first in the 19th minute as Randall Leal got the Whitecaps defence napping and beat Hasal low. Tough one to give up by the Whitecaps, especially after such a good start. The thing about pressure is that if you aren’t aware, you’ll get caught on the counter. The Whitecaps were sloppy for just a second and it cost them.

Nashville nearly got another as their throw-in reached Hany Mukthar’s shot was blocked. But on the ensuing corner, Mukthar’s ball found the head of Jack Maher who put it in the back of the net. That was just deflating.

The visitors started to dictate play soon after. There was lots of time left for the Whitecaps to make it a game but things were looking tough.

The pressure by the Whitecaps started a few minutes later. Before that, it didn’t look like they could get the ball. But the final pass hurt them again. There was a very reckless challenge by Javain Brown which saw him get a yellow card. That was likely out of frustration and it was totally unnecessary.

It was a great first 20 minutes but then it all fell apart.

Sartini did not waste time making changes. At the half Raposo was off for Cavallini and Berhalter was taken off for Cristian Dájome. The ‘Caps were going with two strikers up front and Dájome provides more creativity so it was warp speed time for Vancouver.

But Nashville wasn’t finished. There was some miscommunication in the box as Maher got his second goal as the ball went past Hasal and Blackmon who tried to keep it out. It just got worse. Hasal gave Brown and Blackmon a death stare. Not sure what the defenders were doing on that goal. They just watched the ball over.

Things got even worse. Cavallini managed to give Alex Muyl a light bump, that’s fine. But what wasn’t fine was he stepped on Muyl’s head. That resulted in Cavallini getting a red card and a lengthy suspension is likely coming up. There probably was no intent to injure but it was just silly, doesn’t matter if Cavallini meant it or not.

Gauld wanted to lead the team back into it as he received Cubas’ pass but his shot from outside of the box just went wide of the left post. At least, they are trying, right?

Veselinović saved the Whitecaps from being down 4-0 as he managed to catch Ethan Zubak on a breakaway but was able to stop him just before he could get the shot off. Moral victories I guess.

The pressure from the first 20 minutes of the game returned. It was too little and too late as you could say. Pedro Vite, who was subbed on for Schöpf, tried a shot but it hit the post. They really wanted some sort of consolation.

Blackmon gave away a penalty on a tackle on Jacob Shaffelburg after a VAR review. This one was a clear pen to me. Blackmon was lucky to escape another yellow. But Hasal managed to stop Dax McCarthy. Moral victories!

That was all she wrote. That was a huge blow to the playoff hopes. The Whitecaps had moments of good play, but it’s the theme of the season: They cannot play a solid 90 minutes.

The question that needs to be asked, is what kind of team are the Whitecaps? Are they a counter-attacking side, a team that likes to pressure or something else? What is this team’s identity?

Sartini did not speak to Cavallini after the match but will tomorrow.

“He knows he did a stupid thing…the emotions are a part of the game,” he said.

The head coach was very blunt about the team’s performance.

First of all, before talking about the playoff implications, it’s unacceptable, said Sartini. It’s a shame what we did today in a game that was so important for our season, in a game at home…we conceded two goals we never concede.”

“We need to work on our pride, to restore our pride and do everything we can in the next six games,” said Sartini. “If we can’t make it, (The playoffs) we can say we didn’t give up. But tonight, we gave up. It’s unacceptable.”

Pride was a theme of the post-match press conferences.

“We need to improve our pride, the fans deserve better,” said Gressel.

” I don’t feel like we gave up, to be honest if we gave up, we are not worthy of wearing the shirt and playing in the league, we just need to play better,” said Gauld.

The Whitecaps had 12 shots but none were on target. That’s simply unacceptable.

Hasal’s reflexes, positioning and diving should be bumped to 99 in FIFA 23 then.

Time is running out. There are only six games left for the Whitecaps, three at home, and three on the road. It looks like the chance for a home playoff date is dead so they have to win four out of the next six to make the playoffs as a sixth or seventh seed.

This was one of the worst performances of the season. The only thing that is close to being worse is that they ran out of popcorn in the press box at halftime.

Jokes aside, the Whitecaps’ next game is next Sunday in San Jose where they will take on the Earthquakes. Kickoff is at 6:30 p.m.